I Got to See the Ponies

I love horses. I always have.

I was a typically horse-crazy girl, collecting china figurines, assembling the stable of my dreams on note cards (drawing on one side, statistics on the other), reading everything published by Walter Farley and Marguerite Henry as well as every story featuring a horse I could find.

When my Dear One suggested an excursion to Assateague, I couldn’t say “yes” fast enough. Had I not read Misty of Chincoteague about a dozen times?

A perusal of the internet turned up The Cedars, a bed-and-breakfast in Snow Hill, Maryland, approximately equidistant from the Maryland access to Assateague in the north and Virginia in the south. The Cedars turned out to be a charming establishment whose proprietors provide a gut-bustingly lavish breakfast. Coincident with our arrival was the adoption of a “golden doodle” puppy they named Percy.

Just as an aside, wouldn’t a cross between a poodle and a golden retriever be something more like a “golden poodle” or a “goodle” or possibly a “golden roodle”? Not too sure where that “d” comes from.

At any rate, Percy attended to his master like a new footman to a butler he was hell-bent on replacing. 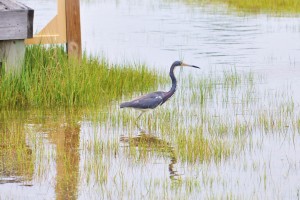 A blue heron stalks through the marsh grasses

On day one we headed north and crossed to Assateague via Maryland. At the Visitor’s Center I submitted two entries to a lottery whose winner will get to name a lovely pinto mare. Dan suggested “Ondine.” According to Paracelsus, Ondine was a kind of water nymph who would become human if she fell in love with a man but is doomed to die if he is unfaithful to her. This naiad is clearly a cousin to the little mermaid as described by Hans Christian Anderson. Given the dangers posed by humans to the ponies of Assateague, it seemed the perfect name.

Day two brought us down to Virginia and across Chincoteague Island. Nature looked pretty similar; the environment was quite different. Thanks to films and presentations, we learned two things.

The second was that squirrels, if we saw any, belong to an endangered species known as the Delmarva Peninsula Fox Squirrel. We saw two of these bushy-tailed, silvery beauties.

The first was that the ponies of Assateague do not belong to a single herd.

In Maryland, the ponies are managed by the U.S. Fish and Wildlife Service. They roam pretty much wherever they please which brings them into regular and unfortunate contact with humans who insist on trying to get up close and personal. Sometimes the results are very unhappy for the humans. More frequently, the outcome is painful for the pony. The ponies belong to small bands, each guarded by a stallion and managed by a lead mare. A lead mare on one band took issue with my getting too close as I photographed. Her clear hostility made me back off. I respect any woman who runs the show. 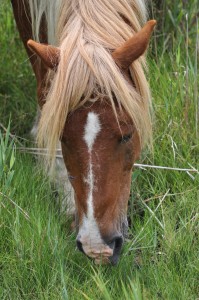 The Maryland herd is kept small—around one hundred horses—through the use of birth control. Each animal is monitored from birth and fillies are about four before they are permitted to breed and in most cases, one foal is all they get. Park Service rangers have to stalk the ladies each year and shoot a syringe full of hormone into those round little rumps, no easy task.

Winds off the Atlantic eased the hellish temperatures. Egrets, eagles and water fowl filled the marshes and the skies. A herd of Sitka elk basked in the sun.

Everyone was on vacation.