A Costume Drama for the World

A student stayed after class this past week to ask a question.  She seemed a little hesitant and I encouraged her to go ahead.

“Are you watching The Borgias?” She blushed.

“Now in what universe would I not be watching a costume drama with Jeremy Irons in the lead role,” I answered.

In what universe indeed.

I discovered the BBC while spending a post-graduate year at Princess Helena College in Hertfordshire in 1969-70. We were riveted by The First Churchills starring Susan  Hampshire as Sarah Churchill, John Neville as the first Duke of Marlborough, and the magnificent Margaret Tyzack as Queen Anne. Subsequently I wallowed in Upstairs, Downstairs, The Forsyte Saga (both versions), I, Claudius, The Jewel in the Crown, and all the rest up through the recently ended return visit to 165 Eaton Place.

I am a devotee of HBO and Starz miniseries: Deadwood, Carnivale, Rome (I have such a thing for Titus Pullo), Pillars of the Earth (despite the presence of Ian McShane, nowhere near as good as the books). I happily pay the bill for premium channels.

Needless to say, the prospect of a real-life costume drama with a famously interesting ensemble cast thrilled me to the core.

This morning I bounded out of bed when my alarm rang at 5:30 am. The coffee was already made and waiting in the thermos jug. As I turned to the Today Show, a Bentley came into view and there were the princes Wills and Harry, in scarlet and black regalia complete with gilt braid and gleaming medals.

I settled on the couch with milk carton, coffee pot, and bowl of rice pudding. I watched as those remarkable brothers entered Westminster Abbey, saluting fellow officers and greeting the Archbishop of Canterbury and the Bishop of London. The rest of the wedding party and most honored guests arrived: bridesmaids and pages, Kate’s mom and brother, Prince Charles and Camilla, the Duke of Edinburgh Prince Philip and Her Royal Highness, Queen Elizabeth II. Everyone looked perfect. Mrs. Middleton in pale blue held her head high in company I cannot imagine she ever thought she might join. Camilla knows that silvery shades of toast and taupe are her colors and she looked like the perfect English country gentlewoman. The Queen was bright as a buttercup in spring sunshine in yellow coat and hat. I could have sworn I saw her Prince of some 64 years sneak an adoring look at his bride.

The bride’s dress was perfect.

I don’t know what all that carping was about, that it was too fifties, too Grace Kelly, too, well, plain.  Didn’t they look at it? The lines flowed, the silk and lace were ethereal against the red carpet and there was just as much fabric and train as that fragile frame could carry with dignity.  The dress had a medieval look to me with the waistline that dipped slightly in front and wide pleats that framed the center panel. She was regal—and seemed to have stepped from a portrait in one of England’s stately homes.

There were even disapproving comments that the bride had been too involved in the design.

Kate took a degree in Art History from St. Andrew’s University in Scotland. I wonder if perhaps she did not find something during the course of her studies that inspired her, some exquisite garment that called out for a modern adaptation. I find a certain resonance between the dress worn by 13-year-old Princess Elizabeth Tudor in Lavinia Teerlinc’s 1546 portrait that hangs in Windsor Castle and the one created by Sarah Burton for today’s wedding. For the record, the embroidery was work of magical fingers at the Royal School of Needlework, based at Hampton Court and just down the road a bit from Windsor Castle.

Fashionistas seem happier with Princess Catherine’s choice of dress for the evening dinner and dance. Hard to imagine that fuzzy cardigan, though, in the Gothic glories of Westminster.

But enough about the dresses. The ceremony was lovely and the bishop’s homily got the tears flowing more than once. Their happiness was obvious; the deep affection radiated by sudden smiles and confident physical closeness bodes well for their future.

My best wishes to you, Wills and Kate. May your very public costume drama leave you with a lifetime of happy and private memories—and thanks for letting me watch. I loved every theatrical moment. 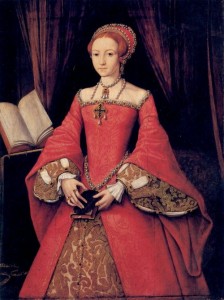 Wills, Kate and the Wedding Dress