Sid Vicious Is Back!

Genuine April weather it was, air soft from yesterday’s rain and sunlight occasionally reaching through the clouds. I was at my desk, focused on the needs of students desperate to improve grades who were finally willing to invite my tutelage on the last paper of the semester. My Dear One tapped on my window, beckoned me out into that sweet afternoon.

“Come,” he said, “I want to show you something.” He paused. “Bring your camera if it is handy.”

My camera was handy. As I stepped onto the patio, I saw my Dear One ambling downward toward the Lower Forty. “Do I need shoes?” I asked. “Up to you,” he said. I’ve walked stranger places in my stocking-feet, so I followed him. He stopped below the retaining wall, waved a hand vaguely toward the upper edge and said, “Look.” 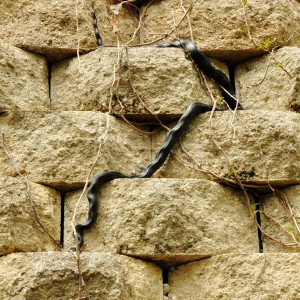 Sid Vicious not looking his best

It took a minute but I saw it some ten feet above me—a lumpy black swag draped across the trapezoidal protrusions of the blocks. It was Sid Vicious, our black racer, Coluber constrictor. He had slithered by my bare foot one July evening in 2008 into a thicket of silver-green artemisia and burgundy euphorbia. A few days later he managed to get himself snagged in the netting we had wrapped around the tomato cages in an effort to defend our produce from the deer. Getting him disentangled was a two person job—my gloved Dear One kept Sid’s hostility distracted from me as I snipped at the plastic threads wound around his back end. Sid subsequently took up residence in the tool shed. We discovered this when he assaulted my Dear One, then reared cobra-like as I cautiously prodded dark corners with a bamboo stake. The next sighting was in the garage where our ophidian friend found quiet, comfort and an ample supply of rodents. He settled under the lawn mower and we thought it best to leave sleeping serpents lie.

We hadn’t seen Sid for more than a month when noticed an item in the “Police Blotter” section of The Record, our local paper: “A woman in the 500 block of Windemere Drive told police Sunday a snake was blocking her entrance.” We nodded knowingly; it had to be Sid, Windemere is just a couple streets away.  A month later there was another complaint: “A woman in the 900 block of Oxford Avenue reported Wednesday a snake near her truck was trying to attack her.” The shortest route from our house to Oxford Avenue is the CSX tracks, and we imagined Sid riding the rails to a new neighborhood.

It was several years before we saw that scaly fellow again. One unseasonably warm afternoon this past November, we found Sid basking in a protected corner of the driveway, luxuriating in the late afternoon heat. He was somnolent, unusually pacific given his history of anger-management issues.

Today was a joyous encounter—for me at any rate. I knew he remembered me when he finally twitched and lifted his head, exposing his creamy throat and twitching a baleful eye my way. His lumpy form turned smooth as he slithered downward to the next block. More alert now, tongue darting, he halted his downward progress and reoriented himself south and west.

Sid wasn’t happy. Too many of my students are not happy and I needed to shift my attention to them. I trudged back to my desk, warmed by this reunion.