We are deeply grateful to be sitting at PHI and not at Dulles, the airport from hell that sits at the other end of the drive from hell. Nor did the choke points between our home and the departure gate make us gag. 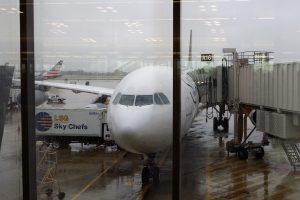 I-95 traffic was sluggish now and then but not jammed. A 1:15 departure got us to Philadelphia International Airport at about 2:30. The horror stories on the news about security taking so long that people missed flights two hours off got to us. My Dear One said parking was atrocious but found a slot in the “L” area. Unfortunately, Lufthansa wouldn’t let me check him in (seems to me that USAir used to…) and we had to stand in line a second time. The TSA line stretched into an adjacent hallway–getting prescreened and flaunting a Known Traveler Number doesn’t help on an international flight–but moved along. We settled in at Gate 16 before 4:00 for the 5:45 to Frankfurt.

Ample time, therefore, to explore the food court offerings. They’re okay. I’ve seen worse. But I’ve seen better. The jelly doughnut from Dunkin’ was stale. The lo mein, whoever produced it, was meh.

I think boarding will begin around 5:15. 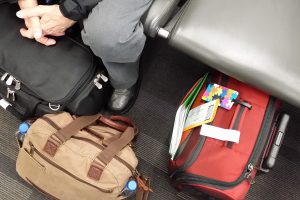 My Dear One and I have anticipated this moment for a year and a half. We get a lot of travel mailings because between 1999 and 2014 we took two tours. We are on lists. So when the Viking brochure came in I flipped through it with the same detached curiosity with which I treat clothing catalogs and the grocery circular. We did notice, however, that the trips scheduled for 2016 were a two-fer. Hmmm.

Viking Cruises. As heavy consumers of the Public Broadcasting Service, we can recite the sales pitch verbatim and describe the videography with our eyes closed. But we are their target audience. Grownups who enjoy cultural activities, travel, food and wine. And they know how to market to their target audience.

After a couple weeks of hemming and hawing and checking the budget we decided on the “Romantic Danube” package: Nuremberg, Regensburg, Passau, Krems, Vienna and Budapest. We had until the end of August to pay the balance; at that point it was only March. So we hauled out the charge card and didn’t give anything much more thought for twelve months. Once that Master Card monster was paid.

We are looking forward to dubious weather: temperatures ranging from 58° F to 81° F and the near certainty of rain. Time at each stop is limited, so I created tiny maps and mini-tours so we can see the same things everyone will but on our own, separate from the herd, more in keeping with our independent habits.

Oooh, the flight crew just strolled down the gangway. Staff are making like it is time to board the passengers. And here comes the announcement.