My Dear One pointed it out to me on our first stroll: “Mr. Softee.” 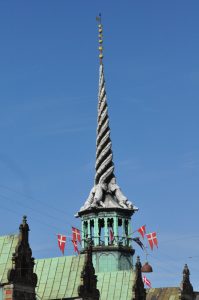 The spire of the of Børsen, the Old Stock Exchange, with its quartet of dragons, tails entwined, does indeed look at first glance like an attenuated tower of soft-serve ice cream. Above the dragons, three orbs symbolize the nations of Denmark, Sweden and Norway. The dragons grasp the eaves of the tower roof with clawed feet, demonstrating ferocity individually and in union.

I am not clear on what they symbolize. The number four suggests the points of the compass and the elements of the cosmos. Once home I turned to a favorite reference, Gertrude Jobes’ two-volume Dictionary of Mythology, Folklore and Symbols (The Scarecrow Press, Inc., 1962. In a veritable laundry list of meanings, the dragon is associated with water as a sea serpent, air as a creature of flight, and the fire that it is said to breathe. Jobes brings the elements up to four with the following: “It also has been worshiped as an earth deity and a lord of the underworld guarding hidden treasures.”

Another source says, “Dragons are as rich in symbolism as they were said to be rich in treasure… [D]ragons represent both great strength and great danger. With their association with hordes of gold or as the captors of beautiful women, dragons can represent opportunity through risk.”

That makes sense. The Børsen was the center of financial dealings. King Christian IV, ruler of both Denmark and Norway from 1588 to 1648, ordered it built; the spire was completed in 1625. Christian IV intended to make Copenhagen a center of trade and wealth and the dragons glare into the four corners of the world as they defend their hoard. (Shades of The Hobbit!)

More dragons congregate at the Rådhuspladsen. Some lounge along the railing in front of City Hall, others around the Dragon Fountain (the Dragespringvandet). The fountain itself seems randomly sited at the corner where Hans Christian Andersens Boulevard forms a “T” with Vesterbrogade. 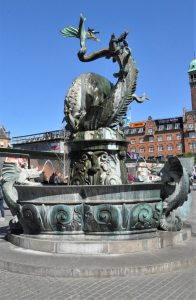 The titular dragon of the fountain, however, is in combat with a bull. I don’t really know why. There is no specific episode I can find as a source of the imagery, but lindworms, these two-legged dragons, originate in Norse mythology. Saxo Grammaticus (c.1160-c.1220), a Danish historian and writer, authored the Gesta Danorum, the first recounting of the history of Denmark. Saxo tells of Ragnar Lodbrok who liberates Thora Borgarhjört from the lindworm she had raised. (Game of Thrones, anyone?) The adult and ill-tempered dragon demanded to be fed an ox every day. At least the story brings together a dragon and a something bovine. In the Dragespringvandet, though, the bull looks to be winning.

That brings to mind a different bronze fountain, the Gefion fountain (Gefionspringvandet) adjacent to the Anglican church on the edge of Kastellet Park across town.

No dragons in this Norse myth. According to a legend dating to the 13th century. King Gylfi of Sweden promised Gefion, a goddess of vegetation and fertility, all the Swedish territory she could plow in a single night. She turned her sons into oxen and the land they plowed was tossed into the sea. Tourists are told that the hole in Sweden—which does, more or less, match the shape of Zealand, the island on which Copenhagen was built—is Vänern, although scholars argue for other identifications.

Designed by Thorvald Bindesbøll and Joakim Skovgaard as part of a competition for a monument for Amagertorv, Dragespringvandet lost out to the Stork Fountain (Storkespringvandet) by Edvard Petersen and Vilhelm Bissen. A few years later the Bindesbøll-Skovgaard group was chosen for the Rådhuspladsen. The composition went through several incarnations; large dragons originally on the basin were moved to the balustrade of City Hall and smaller ones put in their stead. The Dragespringvandet has been moved three times since its completion in 1923, always to make space for the street, most recently in 2001. 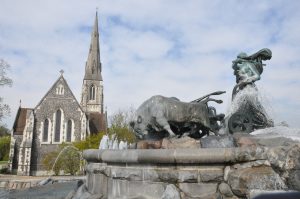 The Gefionspringvandet, financed by the Carlsberg Foundation to celebrate the 50th anniversary of the founding of the brewery, was also intended for the Rådhuspladsen before the site adjacent to the Kastellet was chosen. It was begun in 1898-99 by Anders Bundgaard who sculpted the figures; the first jets of water sprayed into the air on 14 July 1908. Renovations began in 1999 and were completed in September 2004.

All this makes me realize that I know nearly nothing of the history of the Scandinavian countries, Norse culture and mythology, and Danish art and artists. But then, learning just how little one knows is one of the reasons to travel.