It Can Always Be Worse

The phone rang. Caller ID said it was the Tattooed Boy, perhaps to wish my Dear One “Happy Birthday” because, after all, it was February 8. But a woman whose voice I did not recognize spoke, saying there had been an accident and that Jay wanted to talk.  He had been hit by a car.

A piece of my brain exploded and then the rational part took over. No, I wasn’t mad I said to his frantic words. No, he wasn’t to stand up, he was to wait passively on the ground for the ambulance. It would be all right. It would be all right. I was on my way. I gave my Dear One the little information that had come with that call and asked him to stay put. If anyone called the house phone, it was imperative that someone be there to answer. I grabbed my phone and headed toward what I dreaded having to see.

I thought about text messages exchanged on January 7:

The next post was a photo of a framed certificate from the Hotel Monaco/B&O American Brasserie where he works: 2019 Employee of the Year. Could any January be more auspicious? Then it turned out that Maryland Hotel Lodging Association had held their 30th Annual MHLA Stars of the Industry Awards Luncheon on February 7. In fact, his invitation noted that “Your presence is requested as you will be honored at this event.” Yep. My Tattooed Boy was up for the award in the Food and Drink category. Being nominated at all is an extraordinary honor, but this was clearly to be his year. 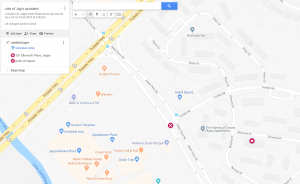 scene of the crime

I drove quickly and cautiously a few exits south on I-95 toward Joppa. It was fairly dark, after six on Eastern Standard Time, an overcast evening. When I arrived at the intersection of Joppa Farm and Trimble roads, the police car was still there but the ambulance was not. The officer handed me the Boy’s license and a print-out of the insurance and ID for the driver who hit him plus information about  the witnesses. The ambulance had gone to Bayview Medical Center he said.

Another twenty minutes or so elapsed before I walked into the ER. They were confused. There was no person by that name who had been brought in, they said. My self-control began to crack. Once he was located, though, I was whisked into a room where various staff hovered over him. The scissored remains of his clothes lay on a heap on the floor. Morphine was dripping into his arm. My Boy was shocky and overwhelmed by the idea that he was letting people down, not meeting commitments he had made, about to lose his job. I contacted his workplace—restaurants are pretty well staffed on a Friday evening—and tried to get him disengaged from the phone. 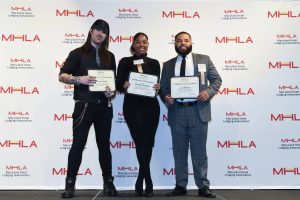 That was, in fact, when I found out about the MHLA event. That had only been the day before and he had not yet had the chance to tell me about it. The fact that my Tattooed Boy had not won turned darkly ironic. The lad that did—a person who is no doubt totally deserving and the salt of the earth—was cited, among other things, for never having missed a day in three years. My Tattooed Boy, one of the three employees who were hired before the hotel and restaurant had even been opened, hadn’t missed a day in ten years. He had, moreover, been Johnny-on-the-spot when someone else didn’t show up or someone needed a colleague to cover. I mean, this is Cal-Ripken-Iron-Man-league levels of performance.

He anguished about that, lying there on the gurney in every kind of pain possible. “Thanks for the awards, guys,” he muttered. “See you in two or three months.” My Boy was in despair at what seemed to him to be a catastrophic failure in light of his obligations.

The main injuries, apart from some areas of road rash, were a badly broken right tibia and fibula and a dislocated left shoulder with considerable damage to the rotator cuff. The leg had to be stabilized by hand pending surgery which would occur the next day. No other procedure or action produces pain quite like that of having his bones realigned manually and then splinted and wrapped. The shoulder was returned to its socket and his arm put in a sling to minimize movement. 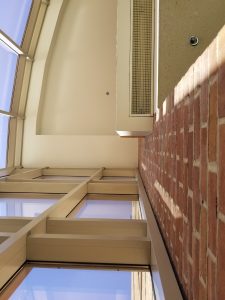 My Tattooed Boy was finally rolled up to a room on Floor 6 around one a.m.

Throughout it all, he has been magnificent. On Sunday, the first day after surgery and about thirty-six hours after he was hit, a pair of physical therapists eased him to his feet. He lost all color and his blood pressure plummeted. The next day, however, when I arrived for a visit, my Tattooed Boy was sitting up in a chair. Every day he worked with therapists for at least a little while, waiting for surgery on the shoulder (done seven days after the leg) and developing enough strength to be transferred to rehab. He moved to rehab on February 19 and took on the challenge of multiple sessions of physical and occupational therapy each day. During the sojourn in rehab, he made friends with his roommate Walter, victim of a severe stroke, and endeared himself to every staff member.

There has been so much to do. Find a lawyer. Done. Kennel his cats (subject for a later post). Done. Collect his mail. Done often. Get repairs done on his apartment (garbage disposal, overhead light, bathroom fan) that had been overlooked too long. Done. Get a temporary handicapped parking placard from the DMV. Done.

Today is Saturday, March 9. He was released from rehab on March 1 just a few hours shy of three full weeks after the accident. After fussing and fretting about whether the upstairs bedroom would suffice and how we would manage, it turns out that the upstairs bedroom is just fine—thanks to his friend Jamie who helped muscle the spare TV into that room when neither I nor my Dear One was up to the task. My Boy only needs one crutch at a time so there is an upstairs crutch and a downstairs crutch.  He manages the stairs (fourteen steps from entryway to second floor) with reasonable security as well as the “walk-in” shower that, it turns out, still has a significant edge to deal with. He has walked each day farther and farther into the neighborhood and now navigates from couch to refrigerator with no crutch at all. Last night he went out to a birthday celebration with friends. PT is not scheduled to start for another twelve days. 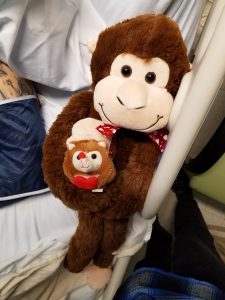 My Tattooed Boy is remarkable. Determined. Damned lucky. He has an extraordinary community of friends and coworkers, too. They called, texted and visited, brought sandwiches and salads, cookies and Gummi bears, sodas, toys and distractions. They confirmed over and over how much he is respected, needed, loved. Thank heaven for all that love.

I am lucky too. He could had died. He could have been left paralyzed or a vegetable. His desire to be back at work on April 1 is a pipe dream but his first day back will be soon enough.

It could have been so, so, so much worse.