We watched the advance of novel Corona, COVID19, as it engulfed Wuhan, spread into other parts of China, appeared in Italy, made its way to onto cruise lines and breached the borders of the United States. We remember SARS, H1N1, MERS and Ebola. This was obviously different. A couple of cases then popped up in Maryland, in distant Montgomery County.

I worried about a former student, Ting, now home in Taiwan. I knew she spent most of her time alone in her studio. I also knew about a recent gallery jaunt to Japan. She was fine, though, Ting assured me.

A Bad Time to Feel Sick

When my Dear One was feeling punk two Thursdays ago, then truly dreadful a day later, I hauled him to a nearby Patient First. They determined that he had no active infection. They also recognized that he was feeling utterly miserable. They recommended a trip to the local ER where at least there were more diagnostics available.

Admitted to the Hospital

After four hours or so in emergency and no conclusive evidence of any particular problem, they rolled him up to the fourth floor for observation and tests. By the next day, everyone entering the room had to suit up: gown, gloves and mask. Wearing a mask for hours at a time is horrible. It feels like you are suffocating in your own damp and germy CO2. 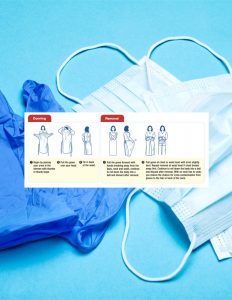 I knew that visitor hours were limited, just ten to eight, given that it was flu season. On returning to the hospital, I discovered that visitors had to provide a driver’s license, sign in for the room to which I was headed and slather on some handsanitizer first.

Countless nurses, technicians, physician’s assistants and specialists were in and out of that room. I kept struggling to understand words muffled by masks. (It’s difficult for everyone. Being half deaf means I have extra trouble decoding speech when I don’t see lips move.) Eventually they moved him to a new room, dropped the isolation gear and continued with the tests.

It Can Always Get Worse

My Dear One called that Sunday night because he felt so awful. Moments after I hung up the phone, I fielded a robocall from our county executive. In reassuring but firm tones he notified us that the first case of corona virus had been documented in Harford County. The patient, he said, was an “…86-year-old…”—my heart utterly stopped because my Dear One is 86—“woman…” What a huge amount of time lapsed between the statement of age and the identification of gender.

By Monday, COVID19 had supplanted seasonal flu as the hospital’s main concern. Administration ordered two more hours cut from visitation and visitors were allowed in only one at a time. Thursday past, they sent him home. Apparently, they were clearing a lot of beds; a second case of COVID19 had been diagnosed in Harford County.

Safe For the Time Being

We are now largely housebound. Getting necessaries means making a list and driving together to the store where my Dear One reads or listens to music while I dash in. We are not surprised that the bucket seats in our RAV4 are incomparably more comfortable than any chair anywhere in the hospital.

Ting checked back in, too. She is now worried about us. What goes around comes around.