The Flip Side of the Coin

It seems you now have to own a smart phone in order to buy a car. I guess it happened after we bought Ruby, our Toyota RAV4 in 2017 and replaced her with Garnet, another RAV4, on March 25, 2021. Four years ago, the cars seemed to function on their own. These days, paying for certain “optional” equipment means that a feature is, in fact, an app available through your smart phone—if you have one.

Designers work their Computer Aided Design programs to the bone to make each iteration of a product shinier and somehow more desirable. Some of them, no doubt, want to make the car genuinely better and not just different. So in the last four years, Not sure what they are thinking over at Toyota. The well between the front seats is less useful. The pockets in the doors have been rededicated to water bottles.(Putting the water bottle in the cup holder doesn’t work for most people?) It now takes two buttons instead of one to increase or lower the blower.

But the worst is the GPS. In Ruby, I got in, turned the car on, punched the navigation button and the GPS map came up along with the options for getting directions. Now I get in, start the car, plug my smart phone into the USB data port, open the Toyota app, wait for a security code sent to my email, punch that into the system and then I get Google maps. Straight from my phone and the service I pay for monthly.

I don’t like Google Maps in the car although I use them in other ways. I do like the maps provided by Garmin Nuvi. The maps that came with Ruby were just fine. Heck, the Tom Tom I used briefly in a car we rented in Vilnius, Lithuania, was okay. Google is useful when I am working at my computer; not so much when I am driving.

Ya Gotta Have a Smart Phone

In fact, a smart phone is indispensable to a host of modern inventions. My Dear One’s kids gave us an Amazon Echo and a video doorbell for Christmas. Neither can be set up or used without a smart phone.

From my point of view, it’s an insidious conspiracy of the digital-industrial complex. I resent everything about it with every fiber of my being.

And Ya Gotta be Good at Using It

I’m likely to deck the next person that tells me that using one of these devices, or the software that runs it, is “intuitive,” that the setup is “easy,” that I will “love it,” will incur the full force of this old crone’s wrath.

If the claims of simplicity are not a flat-out lie, then they are a delusion harbored by youngsters born to the digital age. For many of the not-yet-dead for whom transistor radios were an astonishing development,  there is nothing all that intuitive about using software. The fact that said software is rewritten and “improved” with the same regularity that I replenish my wine supply? Well, let’s just say the wine goes down easier.

Progress for me is little more than a conspiracy. The nexus of progress—the point at which toys, technology and tools essential to modern life intersect—is the smart phone. It is the embodiment of evil. QAnoners think that the great conspiracy is a cabal of Democrats and liberals intent on the murder of children and the exclusion of Donald Trump from the White House. The “research” they tell me to do, however, requires a device connected to the Internet and loaded with software that tracks one’s every key stroke and movement in space.

Progress is clearly the process by which the rich become immeasurably richer through the miring of the general population in the quicksand of their digital devices.

Progress can be good stuff. But beware of the flip side of the coin. 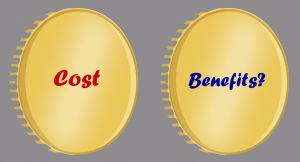 flip side of the coin