The Longest Seven-Tenths Of A Mile

My Dear One and I headed out that sunny Memorial Day to Swan Harbor Farm. A pleasant stroll down by the Chesapeake Bay. Just the thing. Swan Harbor Farm is administered by the Harford County Department of Parks and Recreation, has agricultural education opportunities for school kids and is a popular site for weddings. A gazebo sits just above the pier that thrusts out into the Bay. This is the main attraction for most people. Mostly people go there to fish from the pier or attend weddings. The setting is lovely and the view rather wonderful. 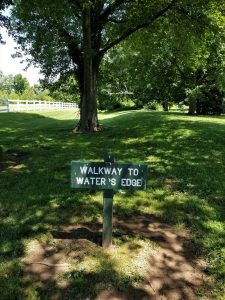 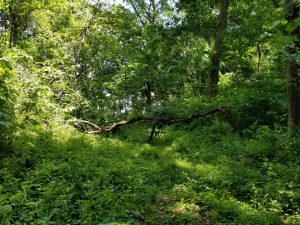 Plans for improving the facilities are floated with regularity. Quite some time ago there was a piece in the paper about how they were going to surface the path to make it more accessible. On the map provided by the Birders Guide to Maryland and DC, a tan line indicates a paved or gravel walkway. Green lines indicate a “natural surface.” This should have been a green line because it is definitely a “natural surface.” With abundant natural obstacles. Fallen trees. Plenty of poison ivy.

We had, however, dressed sensibly. My Dear One wore boots, jacket and cap. Eschewing long sleeves lest I overheat, I was in jeans and teeshirt and Walmart’s version of Wellie boots. We both carried walking sticks and I had a camera slung around my neck. 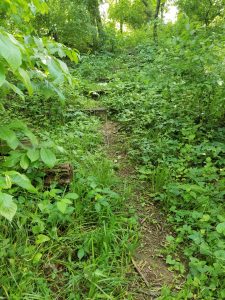 It was high tide at the Old Landing; after a moment or two we headed back. My Dear One suggested we take the shore path toward the pier. We were certainly under the impression that there was a shore path. I mean, there are, in two places off the Old Landing path, stairs built into the hillside and beyond them, tracks worn through the woods. I  briefly considered the advisability of walking there in short sleeves, threw caution to the winds. Well, to the very slight breeze that shivered the foliage of the canopy now and again. 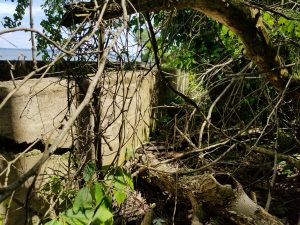 That track was fairly well worn into the ground, although rosa rugosa, briers, assorted vines and other growth reached out to scratch and entangle us. The waters of the Chesapeake Bay remained visible a precipitous thirty feet or so off to our left.

We bushwhacked onward, conquering the massive trunks of fallen trees that blocked the way. As we neared the pier—or seemed to—the brush grew denser and our sense of there being anything like a path faded. The shoreline moved from concave to convex and back, and the land rose sharply away from the water.

Remains of Times Past 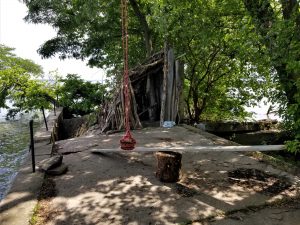 someone hangs out here

Concrete ruins sat entangled in growth like some set for Indiana Jones. Really a lot of concrete.  The remains of a wall held back the Bay and brought us to the slabs of a platform now transformed into a sort of playground and campsite. Clearly you could paddle in; could we also walk from there to the Swan Harbor pier? Surely our destination was within reach.

Uh-uh. More barely penetrable undergrowth, another fallen tree barring the way, as we persisted. Suddenly we were at the edge of the water. Driftwood bobbed in the waves. There was no way ahead on land, only a slog through waist deep water and muck. Going forward was no longer an option. We had to turn around and retrace our steps. 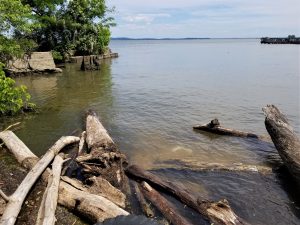 the end of anything resembling a trail

As we struggled back up and over the concrete ruins, I wondered if I needed to call 911 and tell them that a water rescue was in order. We scrambled up a steep slope, hopeful of locating a more direct route toward the pier or farmhouse; no such luck. I slid downward, mostly on my butt, feeling the muddy damp seep into my jeans and worried that one of us was likely to sustain a serious injury. What exactly did we–a pair whose ages average seventy-eight—think we were doing? We had clearly moved from senior citizenhood straight into senility.

With Our Sights on Home 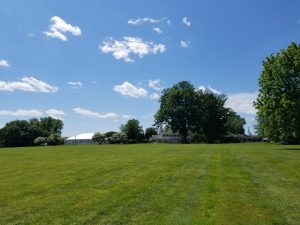 Back on the trail we plodded toward safety. Motivated by the prospect of an icy vodka-tonic generously flavored with lime, we returned to the place where three roads diverged in a brambly wood. The one most traveled by, for us the choice of exhaustion, returned us across the lawn and thence to the parking lot and our car. A hike of about seven-tenths of a mile that felt like miles. 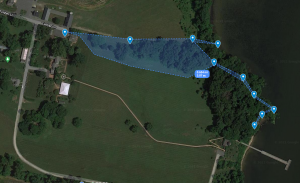 about seven-tenths of a mile

Back at the house I scrubbed up in the shower, trying to forestall the inevitable case of poison ivy. They say if you get that urushiol off, you should be okay. That may well be true but I have a rash up and down my left arm, anyway.

The vodka-tonic, though, was really, really good.