Reading the Fine Print on Politicians

I had just gotten comfy for my months-overdue fix of “Last Week Tonight with John Oliver” when the doorbell rang. It was Republican Christian Miele, come by to stump for my husband’s vote for state senator in District 34. My Dear One is still a registered Republican so he can vote in Maryland primaries; by the time the January 6 Insurrection rolled around he was no longer a member of the GOP. 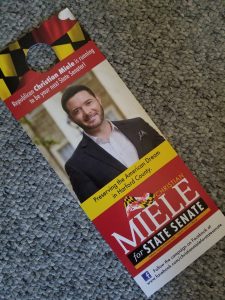 Miele was freshly-scrubbed, well-dressed and cute as a bug, clutching a fistful of  door-hangers in Maryland’s official colors of black, red, yellow and white. He seemed likeable.

After informing him that my Dear One doesn’t talk to strangers and that I am a Democrat who talks to everyone, young Christian soldiered on. I provided him with some insight into my loathing for the GOP—but nicely–and gave him an opening to make his pitch. My husband, I said, remained registered as a Republican only so that he could vote in primaries for the least terrible candidate of that party.

Miele spoke about cooperating with Democrats. He said he believed in getting things done for people, not getting lost in partisan issues. I suggested that he give me a flyer so that my husband could read it before deciding on his vote. We waved goodbye, parting amicably.

It didn’t take more than a glance at the door-hanger and a few minutes on Google, to separate fact from fiction in his pitch.

That apparent paradigm of civic responsibility and moral rectitude is a wolf in puppy’s clothing. He lies. He dissembles. Everything he printed on that door-hanger directly contradicts the words he spoke to my face during those few moments.

The statement there is that despite the criminal and treasonous acts of Donald Trump, while in office and in fostering the January 6 Insurrection, he is a Trumpublican all the way. The scarlet ground of his campaign signs all but screams “MAGA!”

Not sure how he gets from working for people with enough wealth to write estate plans to protecting working families who can’t earn what it takes pay the rent and utilities, put food on the table, cover medical bills and cover the costs of getting to work.

A leader with a strong conservative record. As a member of the Maryland House of Delegates from 2015-2019, Christian Miele voted to repeal O’Malley’s “Rain Tax” and opposed every tax increase pushed by the Democrat politicians in Annapolis.

Now we are getting down to his agenda. He is against efforts to clean up the Chesapeake Bay, despite its core importance to Maryland’s economy and ecology. He is against the idea that rich people and large corporations should pay their fair share of taxes.

If there is any doubt, listen to that echo of Trumpist disdain in “Democrat politicians.” He knows that’s grammatically wrong but that it rings the bell that summons the reactionary faithful. 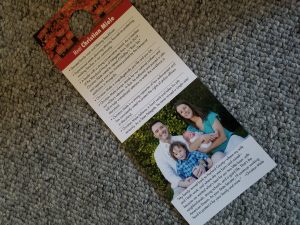 Is he “pro-life” or merely anti-abortion? Miele asserts that the government has the right to make a woman’s health care decisions for her. He therefore believes that they should choose how and when she will have children, control whether or not she will be able to have personal autonomy in life and be able to work toward a prosperous future.

About that being “unapologetically…pro-2A.” I had to look up “2A.” 2A is an arm of the National Rifle Association and its PAC, the Institute for Legislative Action (NRA-ILA). The first impression I get from the 2A website is that its members are hell-bent on turning us into paramilitary society of vigilantes. This is unquestionably not about the rule of law; it is about the rule of guns.

Christian Miele always stands for our national anthem and our military veterans. In fact, he authored and passed a jobs bill to help unemployed veterans re-enter the workforce in Maryland.

He always stands for the national anthem? Just as the Ten Commandments draw a clear distinction between the worship of the true god and false deities, I discriminate between doing my patriotic duty to this country and simply hollering, “My country right or wrong.”

Exactly how many jobs did Hire Our Veterans Act of 2017 create for our veterans. How, moreover, has Miele worked to improve health care and housing for veterans? Plenty of bills get proposed and passed; this was a feel-good bill, fast-tracked for success. What was the outcome?

Christian Miele is a strong supporter of law enforcement and has consistently voted to protect the rights of police officers in Maryland.

Let’s just whistle for that dog, shall we? Why not just say outright that Black Lives Matter is a criminal organization? Why not confirm that in “upholding” the law, police officers are exempt from the law? The problems with this position are inextricable from Miele’s fealty to 2A.

Christian Miele believes in hard work and takes his job seriously. As a State Delegate, he never missed a single vote!

Oh, bravo. This definitely earns him a gold star for attendance. If Christian Miele, however, has consistently voted for legislation that is pro-gun, anti-Black and LGBTQ+, for the rich and against the poor, I don’t think attendance is much of a selling point.

Does Christian Miele work honestly and collaboratively across the aisle? Clearly not. Consider the peculiarities of the election he narrowly lost to incumbent Democratic Senator Kathy Klausmier (8th District). She was primaried at the 11th hour by faux-Democrat Max Davidson, a lavish funder of the campaigns of Miele and other Republicans. He claims in his campaign literature that “My family moved back to Harford County…because we wanted what’s best for our two little boys: safe neighborhoods, strong schools, and a good life.” That’s GOP code for life with fewer Black Lives in it. And an electorate that is bright Trump red. 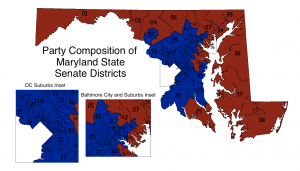 Miele’s door-hanger has a sharp design and expensive production values. It presents him as the white Christian male version 20.22 of the GOP, without the fetid swamp oozing from the Trump spawn or the lunacy of a Madison Cawthorn or Marjorie Taylor Greene. Yes, that pun was intended.

Christian Miele is to me all the more dangerous because he is not what he seems to be.