Detroit I: The Gap-Toothed Smile

So many bad things are said about Detroit. Television programs show a city that appears to be abandoned and newspaper headlines focus on criminal proceedings against elected officials and a devastated economy.

What I found was a place of broad straight avenues carrying little traffic, astonishing architecture, some well maintained and much in ruins, and a pervasive cheery kindness—sort of an aged and gap-toothed smile. 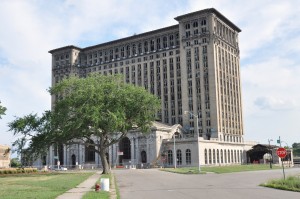 Lynn found me at the baggage-claim area of the Detroit Metro airport, a thoroughly nice facility. Rather than going straight to the apartment in the Royal Oaks suburb, we drove around the city. It was hot under a fiercely blue sky and suddenly I saw off to the right, like some abandoned castle in its empty keep, the Michigan Central Depot. One of the grandest–and certainly the tallest—of American train stations, it now looms over an elegant geometry of intersecting and curving streets. The emergence of Detroit as America’s Motor City is evident in its placement some distance from the Campus Martius and urban center as well as access that focused on the arrival and departure of travelers by automobile.

Amtrak abandoned the station in 1988 but hope remained that this gorgeous hulk could be saved and would inspire a neighborhood renaissance. The City of Detroit still considered the building a “Priority Cultural Site” in 2006 but in 2009 the City Council passed a resolution calling for its demolition. A local resident immediately sued to halt the razing, citing the National Historic Preservation Act of 1966. Research suggests that asbestos abatement activities were to have begun in June 2011; there was no evidence that I could see of any such work. 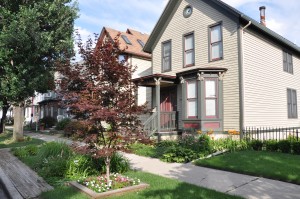 From there we rolled past blocks of eviscerated homes, neighborhoods I could easily imagine filled with productive and happy families. Suddenly a left turn brought us into a magical place of colorful bungalows and beautifully tended gardens. Michigan Avenue was a few blocks away and the skyscrapers at Detroit’s heart saluted us from not so very far away. Lynn parked and wandered as I took pictures of what seemed like the dream of Oz in the midst of Dorothy’s dreary Kansas. Flora welcomed me from her porch. Oh my yes, she said, she had lived here all her life, more than fifty years.  In fact, she had lived at the house next door—she gestured to the right—before moving into this one. She had worked at a building on Michigan Avenue, just a short walk away. Her accent told me that she was born south of the Border. Her dignity and optimism demonstrated why a country built by immigrants holds such promise.

Before heading to Greektown and dinner at Mosaic (If you go, order the fried calamari. It is the best, simply the best, and the portion is large enough for an entrée), we drove to Belle Isle—the beautiful island that Frederick Law Olmstead shaped in 1883—and looked eastward to Canada. A curving roadway winds through overgrown wetlands, gardens gone wild and lively with birds. All alone on a slight hill, the James Scott fountain cascaded and spouted and sprayed water. The designer of this marmoreal splendor was Cass Gilbert (1859-1934) best known as the architect of New York City’s Woolworth Building and the Supreme Court in Washington, D.C. I wish the following anecdote had been known to me as I took pictures: 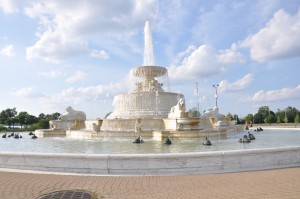 Scott’s Last Will and Testament devoted his fortune to the erection of a fountain on Belle Isle… [along with] a life-size statue of himself… [T]he executors of his will appointed four of the nation’s leading architects, including the son of Frederick Law Olmstead, to supervise a competition to select a designer… The well-known New York architect Cass Gilbert won that competition in 1914… Gilbert selected the New York sculptor Herbert Adams to design a life-sized statue of James Scott.

Controversy continued about the Scott Fountain… Scott’s estate kept appreciating… By the time building started, more than one million was available to add almost 1,000 yards to the west end of Belle Isle to accommodate the…Fountain. 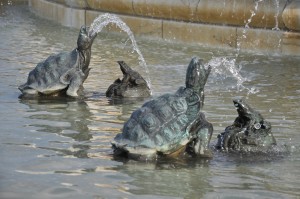