Lynn is a natural caregiver and that means she nourishes, certainly the spirit and absolutely the body. She comes by it naturally. Her late father, Joe the Plumber, was a marvelous cook; Hungarian-kitchen lore plus the resources of Cleveland’s West Side Market meant that his dining-room table needed sturdy legs even for the most ordinary meals. Lynn saw my Detroit excursion as a series of restaurants interspersed with museum visits. Venues were chosen with care: recommendations were sought from epicurean locals and much research was done. The best laid plans, however, et cetera, et cetera… Neither of us still boasts the robust appetites of our girlhoods and the refrigerator soon overflowed with doggie bags and boxes.

Flash fried calamari, lemon beurre blanc, capers, tomatoes and scallions (I think they forgot to mention the hint of pepperoncini) at Mosaic on Friday night was easily twice the size a starter needs to be and most of Lynn’s platter of pesto fettucine with steak tips had to be packaged up. At one o’clock on a Saturday afternoon, the line at Zingerman’s Delicatessen in Ann Arbor wound up the sidewalk and down a tunnel, and the prospect of a forty-minute wait was more than I, at least, could tolerate. Strangers we stopped in the street recommended Gratzi nearby on South Main Street where individual pizzas and a glass of house Chianti gave perfect satisfaction… and two half-pizzas came home with us in a box.

That evening it was on to the Forest Grill in the suburb of Birmingham. This was the place recommended in particular for its wine list by the proprietor of Simply Wines in Ferndale. He should know. What a place!  No booze, no beer, just a breathtaking array of still and sparkling wines. Caution restricted us to the appetizers list: white corn and lemon glazed shrimp risotto with bacon lardons, parmesan reggiano, mascarpone, and black truffle for me, French onion soup and potato gnocchi and lobster for Lynn. The wine was a tremendous red, spicy and full of fruit, although darned if I can remember what it was. Thank goodness there was room for dessert. Mine involved white cake, fresh mango and grated coconut, and strawberry gelato. Lynn brought home the remainder of her bread pudding.

Sunday was to include the popular brunch at Whitney’s down Woodward a piece from the Detroit Institute of Art but we decided we couldn’t spare the time. It took us a full hour to wander just the Dutch galleries and we fortified ourselves in the museum cafeteria instead.

Art, after all, and not food, was supposed to be the main event, and who knew there were such beautiful Joan Mitchell paintings in the area. Ann Arbor’s University of Michigan Museum of Art—they call themselves UMMA, which sounds something like the Japanese sense of the savory—is a jewel box of modern paintings, Asian art and Tiffany. They shooed visitors out at four-thirty to set up for an engagement party—best wishes to that happy couple—and I regretted that the show of modern Chinese woodblock prints was too much for me to take in.

My list  of “must-sees” at DIA included Jacob van Ruisdael’s, The Jewish Cemetery (1654-55), The Wedding Dance (c.1566) by Pieter Breugel the Elder, and the painting the English critic John Ruskin reviled saying “I have seen, and heard, much of cockney impudence before now; but never expected to hear a coxcomb ask two hundred guineas for flinging a pot of paint in the public’s face.”  James McNeil Whistler’s Nocturne in Black and Gold, the Falling Rocket(1875) did not disappoint. Nor did Cotopaxi (1862) by Frederick Edwin Church. Unanticipated delights included George Bellows, A Day in June (1913); Otto Dix, Self Portrait (1912) and Paula Modersohn-Becker, Old Peasant Woman (c.1905). 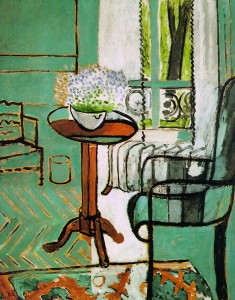 I did not expect to find The Window (1916) by Henri Matisse although I should have. I am not an unequivocal Matisse enthusiast. His works from the later teens, though, with their Cubist structure, subtle chromatics and probing exploration of the nature of optical experience are for me a pictorial Cogito: “I paint so that I may know.” In this canvas blues and greens interact warily across black lines; light shines through curtained casement windows, making translucent the petals of the bouquet on an umber candlestick table, and coming to rest on the figured oriental carpet as a patch of purest white. It is a work of such philosophical severity and poetic intensity. It is what it is and I can only look at it and wonder.

We passed on hotdogs at the Coney Island chain that night; instead we munched on leftovers and raised a glass of chilled pink effervescence from the region of Alsace. It was a feast and the friendship that brought this weekend a work of art.