Before we travel, of course, we contact credit-card companies and our bank lest they get perturbed at withdrawals and expenditures in far-flung places. At least we do that now ever since Bank of America slapped a freeze on my money when I tried to make a withdrawal at the Milan airport a few years back. Getting scolded half a dozen times by separate BoA employees before I finally got given to one (who also scolded) who could defrost my account possibly was worse than not receiving the expected handful of notes, so lesson learned. This time BoA—which sadly has no “partner bank” in these here parts—also raised our daily maximum so we could make a gift to the Balbieriškis cousins.

Not that it makes any difference. 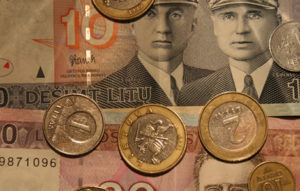 Yesterday our requests for cash were denied. Feeling a little concerned—those warnings about ATMs stealing financial information get one paranoid—we went inside to consult a teller. She seemed unconcerned.  “Just ask for a smaller amount,” she said. Paranoia, however, took over so we returned to Nemunas Tour where we could log into our bank accounts and make sure there had been no unauthorized actions.

Dank, raw weather notwithstanding, we returned to Kaunas this morning to see a few sights in the Old Town and try wheedling money again. This time a Swedbank coughed up 1,000 litas (about $370) but a DNB limited us to 500 litas. We stopped at another Swedbank ATM at the Maxima grocery store in the village and the most it permitted was 200. We’re covered for tonight’s festivities with the cousins (we also have a Maryland Institute College of Art canvas bag, some MICA teeshirts, a couple Johns Hopkins tees and two hand-printed scarves from the Baltimore Museum of Art) but gee willikers!

BoA, we thought, was a little tight-fisted with our allowance but at least it’s consistant throughout the institution. Lithuanian banks, it seems, leave ATM limitations entirely up to the individual branches. And you know what that means, don’t you? Yes, indeedy, big fat transaction profits!  Every swipe of the card comes with a percentage charge and a transaction fee. Any belief that we might just take out a big chunk of cash when we arrived and make it last eight or ten days was purely delusion.

While we are busy spending money, the Dow-Jones exchange is suffering another plunge. In the immortal words of Alfred E. Neuman, however, “What, me worry?”