Lietuva 5: Cuckoos, past and present

Yesterday as we walked through Grūtas Park, my Dear One halted and said, “Hear that? The cuckoo?”

I listened and heard twitters and warbles and caws, but no cuckoo.

A cuckoo on a wire

No, I couldn’t. But later on, back at Romove Homestead, I thought I had wandered into a Swiss seller of carved timepieces. “coo-cooo… coo-cooo… coo-cooo,” for about an hour. Cuckoo (Cuculus canorus) came back this morning to inquire if we had slept well and a stork stepped daintily among the rushes edging the pond at the bottom of the slope.

Romove has been an enormous surprise. Vazgaikiemo, the location, is not precisely a village despite the presence of a few farms on the perimeter of the establishment. It is a resort and spa intended to be a spiritual retreat, “Harmony Park.” A road leads through fields and woods past an equestrian club that includes a vast stable and deluxe stadium and grassy paddocks in which well-groomed, well-bred horses graze and gallop. The main building is the Hotel Simboly, identified by an immense golden statue of a seated Buddha. The cluster of villas that includes ours is another kilometer or so farther in and there are other groups of cottages under construction. This place is Land’s End, or possibly Eden, all greenswards, ponds, birch groves and wide sky. You want a place of quiet and solitude, a Spartan but modern accommodation that is mostly expanses of glass and fieldstone piers? Come in low season when the weather is good, like May (although the mosquitos are large and aggressive); I suspect it is gorgeous in October as well.

We chose this place for its proximity to the cousins—the village of Balbieriškis is a few minutes south on 130. It has turned out to be perfect for exploring the southern regions, too, hence the excursion to Grūtas Park, then on to Druskininkai and back via the scenic lanes that wander through farms and national forests.

Grūtas Park boasts an IgNobel Award given it in 2001: the Peace Prize for “Viliumas Malinauskas… for creating the amusement park known as “Stalin World.” (I love the IgNobels. Cousin David and his kids Helen and Calvin have several times attended the ceremony held at Harvard’s Sanders Theater; I am so jealous.)

Before leaving the subject of IgNobels… The 2011 Peace Prize went again to Lithuania, to Arturas Zuokas, “the mayor of Vilnius, Lithuania, for demonstrating that the problem of illegally parked luxury cars can be solved by running them over with an armored tank.” I think I want Mr. Zuokas to be the next mayor of Baltimore.

In 1990, Lithuania reestablished independence and began the complicated process of emerging from the Soviet entanglements in which it had been trapped since the end of World War II. Malinauskas, a mushroom magnate and general entrepreneur watched the statuary and monuments of the old régime dragged off to storage or destroyed and imagined instead a place, something between an entertainment, cautionary tale and history lesson, where these works might be preserved.

Grūtas Park was the answer, but an answer fraught with controversy. Many people saw the destruction of the works as just, a cleansing of Lithuanian life and spirit. Others simply wanted to eradicate all memory of that time, distance themselves from the pain and terrible losses it represented. One of the delights is a wall by the entrance plastered with enlargements of articles and commentary from around the world, including a piece in Newsweek magazine.

from Marx to Stalin

Relics are not restricted to artworks. An engine and boxcar used during Stalinist deportations to exile hundreds of thousands of Lithuanians from their homes to gulags and terrible deaths in Siberia sat silently on a track. (This is the story imagined so eloquently by Ruta Sepetys in her 2011 novel, Between Shades of Gray.) A waterway along the forest edge is lined with guard towers and barbed wire. The main exhibits, though, are the eighty-six statues by forty-six sculptors. The most common faces are those of Vladimir Lenin and Joseph Stalin. Karl Marx, the author of The Communist Manifesto is there, too.

monument to an executed Lithuanian communist

So are numerous Lithuanian communists, converts to the cause, organizers of the Red Terror, and criminals in the eyes of their countrymen. A few represent the martyrs of Communism, mostly young Bolsheviks, many of them women, captured and executed by the Partisans.

It was a relief to leave Grūtas and continue into the center of Druskininkai. We halted briefly for a glance at the ornate yellow exterior of the Jacques Lipchitz museum and visit the blue-and-purple Russian Orthodox church.

The Lipchitz museum opened in 1996 is listed by the Thomas Cook guide as welcoming visitors only from June through August. It was shabby and silent as I peered through the windows. I could see panels with photographs in some rooms. In a space at the back stood an enormous plain metal menorah. Lipchitz (1891-1973) was born in this town, presumably in this house. His father was a building contractor and so the exuberance of craft may have been intended as a sort of advertisement.

The Orthodox church sits in its own tiny park at the center of a sort of rotary. It is a dollhouse of a place of worship, a centralized design rich with ornament, paintings, icons, and carpets, and redolent of incense. A woman sits in the corner selling cards, reproductions of the icons, and presiding over the selection of books. I did not see one in English; most were published in Lithuanian and Russian.

As we prepared to leave Romove, the air was cool, and the early bright sunshine eased into a gentler light under skies more cloud than blue. A tiny bird we see everywhere, a lively creature with a bobbing tail, a “white wagtail” (Motacilla alba alba) and the national bird of Latvia, skips around the deck outside the door before taking wing. 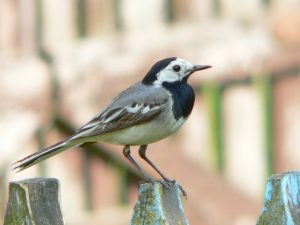 A breeze is up and we have a four or five hour drive to the Baltic Sea ahead of us.