The Seven Hills of Rome (well, eight if you include the Pincian and ten if you cross the Tiber for the Vatican Hill and the Gianicolo) feature in legend and history. Sensible ancient Romans, Princes of the Church and the one-percenters of the 16th and 17th centuries built their summer palaces on those summits to escape the torpid heat of summer: the views are panoramic and the breezes fresh. 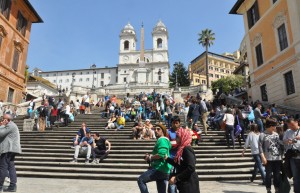 There are, of course, famous stairs like the Spanish Steps that lead from the Piazza di Spagna and the charming little pool, the barcaccia di Fontana (1627), built by Bernini father and son, Pietro and Gian’Lorenzo. (The English poet John Keats listened to the splash of its water as he lay dying in the Pink House just to the right of the Steps, and said it brought to mind lines from an old play, words that adapted served as his epitaph: “Here lies one whose name was writ in water.”) One descends to the Piazza, from the church of Santa Trinità dei Monte above, from the Pincian Hill and the summit of the via Veneto. The steps were designed in the 18th century by Francesco de Santis and function as a social hangout for local folks and legions of tourists. The steps curve up and up with landings where one may pause to catch breath and try to elude the aggressions of trinket sellers.

Rome has far more ancient stairs as well, like the pair that rise from a single point up the Capitoline, to the door of Santa Maria in Aracoeli on the left and the Piazza del Campidoglio on the right. The Aracoeli steps, all one hundred twenty-four of them, were built at the order of Cola di Rienzo (1313-54), medieval politician and erstwhile dictator of Rome. The Divine Michelangelo (1575-1664) created the graceful cordonata with its wide balustrades. In either case, spiritual, cultural and political illumination demand strong knees.

Cheek-by-jowl with these gems is the blinding whiteness of the Monument to Victor Emmanuel II, the Altare della Patria, “Altar of the Fatherland,” or, less grandly, the “Wedding Cake” or the “Urinal of Rome.” It fills an entire side of the Piazza Venezia and became part of the scenery for Mussolini’s orations from a nearby window. (The back door of the Cake, in fact, exits onto the portal of Aracoeli.)

The architect Giuseppe Staccone designed it in 1885, distributing the sculptural elements to a number of neoclassical artists. Its most useful feature is the viewing deck at the very top, a place that now can—thank heavens!—be reached by the ascensore panoramica and a payment of 7€. Of course, getting to the elevator requires climbing a couple of flights, turning right and hiking up to a landing, then moving up more steps, following the signs to the ascensore and winding up a long stair that finally brings you to that terrace where one may finally take advantage of the mechanical lift.

I grant you, the vista is amazing. Definitely worth the hassle.

But stairs—grand, inconsequential and pedestrian—are ubiquitous. The Botanical Garden has its own Scala Grande leading eye and feet upward; the heights of the Gianicolo are accessed by moss-cushioned steps that cut down its slopes. What looked like a reasonable walk to the Villa Sciarra Gardens in Trastevere turned out to be a hike up rising sidewalks and one hundred twenty litter-laden steps to the Scalea di Tamburino. The vast gardens of the Villa Doria-Pamphilj—sadly not seen on this excursion—are higher still. The popular Villa Borghese tumbles mostly downhill from the Roman walls on the Pincian to the basin of the Piazza del Popolo.

What Roman guidebooks really need are clues that some destination involves a climb, you know, contour lines or isohypses as the cartographers call them, or “hypsometric tints” than identify hills and their heights.

Because then you know when to hail a cab.