The Eternal City 5: Architecture of Visions

In 2005, Jake Morrissey published a book called The Genius in the Design: Bernini, Borromini, and the Rivalry that Transformed Rome. Haven’t read it? Do. It’s brief, fascinating, dense with information about the birth of the Baroque in Rome, and it makes you care about these extraordinary artists.

Mostly it made me care about Borromini.

Francesco Borromini (1599-1667) was born in a small northern village practically in what we think of as Switzerland today. His father’s family name was Castelli. Young Francesco, however, took the name Borromini, a name connected to his mother’s family; through his maternal line he was also distantly related to the prominent architects Domenico Fontana (1543-1607) and Carlo Maderno (1556-1629). Papa Castelli was a master stonemason and apprenticed the lad to a sculptor in Milan. Borromini’s story was complex and melancholic. In his lifetime, his art astonished many but was underappreciated and inspired no followers; unlike Bernini’s robust classicism and naturalistic qualities, Borromini’s art was abstract and mystical; it was “modern” in the sense of being before its time.

Maybe that is what draws me, an art historian and modernist, to this Baroque master.

At any rate, I had three “I want to sees”: the Borromini staircase at the Barberini Palace, the illusionistic arcade at the Palazzo Spada and the Church of Sant’Ivo all Sapienza.

That is not all there is in Rome of course. It was, however, what I needed.

I started with an old friend, San Carlo alle Quattro Fontane on the Quirinale (1634-77). It is, is some ways, Borromini’s first great project and his last, as it took forty years to complete from housing for the Trinitarii Scalzi dei Riscatto de Spagna, the “Barefoot Trinitarians” to the cloister adjacent to the church, the church itself and finally the façade. The modern architect Frank Gehry says is the greatest building every built, and I find it hard to disagree with that.

So much of what Borromini created is small, and in that sense intimate. Yet his buildings transcend their scale to express the infinite of the Almighty. It seems to anticipate the ideas of the English poet and painter William Blake (1757-1827), who opened an untitled poem from his Auguries of Innocence with this verse:

To see a World in a grain of sand,
And a Heaven in a wild flower,
Hold Infinity in the palm of your hand,
And Eternity in an hour.…

The space below the dome undulates with the columns that are set forward and back. Apses cup the dome like the hands of a divinity lifting water to the lips of a parched soul.

Early in his career, Borromini worked alongside Gian’Lorenzo Bernini (1598-1680) for Carlo Maderno on the Palazzo Barberini. Each designed a staircase for a wing of what was functionally conjoined villas. Bernini’s is grand, regular and rectangular. Borromini’s syncopates its way upward, opening on to the Gran Salone with ceiling decorated by Pietro da Cortona, The Triumph of Divine Providence (c. 1630). In 2001, when the building was under renovation, I sneaked through an unattended door, up a stairway, and into this room, where I caught a glimpse of the magnificent painting before being caught by a guard and sent back. It turns out that the stairway was Borromini’s stairway.

The Palazzo Spada near the Campo di Fiori houses a fine art collection—although the dense hanging and limited information makes it hard to discover and enjoy the particular gems. Outside, however, in a sort of orangerie, is the folly known as the Prospettiva that Borromini designed in 1652. An arcade of paired Doric columns support a coffered barrel arch and seems to lead to a garden; there is now a statue as a focus where once there was a painted landscape that expanded the illusion of distance. The walkway is less than nine meters in length—about ten or twelve steps but appears to be much longer. The math was worked out by an Augustinian friar; the execution is all Borromini.

looking up into Holy Wisdom

Sant’Ivo alla Sapienza. This is the church of Holy Wisdom, originally the chapel of the University of Rome. Saint Ives, born in France, lived in the 13th century. His great cause, according to a leaflet provided by the church, was “the needs of the poor and oppressed.” Ordained as a priest, “he transformed his house…into a hospice for the infirm and destitute.” 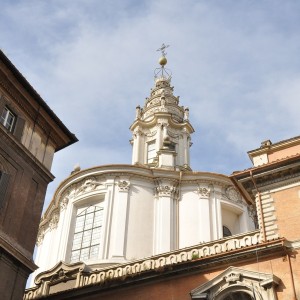 Wisdom seems something more akin to enlightenment than knowledge, something intuitive rather than empirical. The cupola of Sant’Ivo, a miracle of geometry and asymmetry, takes reason and revelation and makes of them something infinitely greater.

There is more Borromini in Rome. I once tossed a coin in the Trevi Fountain, and since then I have returned. I hope the coin brings me back again.