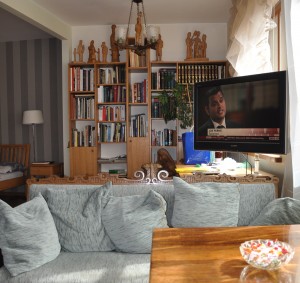 at home in the Republic of Užupis

We could not have imagined what a good choice the apartment at Užupio 26-11 would turn out to be. My Dear One found the listing online. We both loved the old-fashioned blue-upholstered furniture and the sunlight flooding in the window. The apartment claimed a view of Gediminas’ Tower, that famous ruin on a Vilnius hilltop. On a map it looked more or less like it was in Old Town. Convenient to it at any rate. And there was the promise of convenient parking for the car. 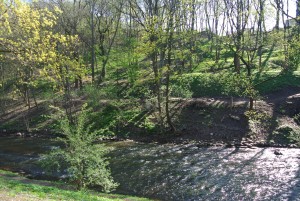 Užupis (OO-zhoo-peess) is a distinctive neighborhood that lies, as the name claims, across the Vilnia River from Old Town. In the 16th century most of the residents were Jewish and it must have remained relatively well into the 19th century, protected as it is by steep hills on three sides. Užupis has a long-standing reputation as a Bohemian locale, a place favored by artists and writers, intellectuals and revolutionaries. By Lithuanian independence in 1991, it had fallen into serious disrepair. A great many buildings are still little more than walls, window spaces and broken roofs. But the area is also something of a construction site with buildings being renovated and new residences underway. Buildings line the streets but gateways lead to courtyards with space for cars, garden plots, laundry lines and swing sets, and street noise gives way to birdsong.

In 1997, local folk declared Užupis a Republic. It has its own flag, currency, president, cabinet of ministers, constitution (see next post), anthem and army. (According to Wikipedia, the army is eleven men strong.) Independence Day is April 1 when visitors and residents alike may have their passports stamped as they pass in and out of the Republic.

There is, however, no embassy to Lithuania. 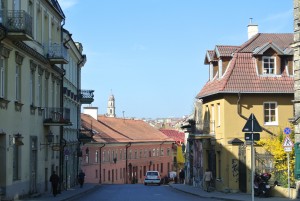 The Republic does celebrate “Iceland day” on June 15th, though. “Iceland Day” pays tribute to the first country to recognize Lithuania as an independent state, which Iceland did on 11 February 1991. A version of the Constitution in Icelandic is included in the array on Paupio gatvė.

Streets are lined with little art galleries, eccentric clothing stores, restaurants and real estate agents. Small bridges span the Vilnia and footpaths follow the river’s edge. On our first night we dined next door at Užupio Klasika, a small and old-fashioned restaurant where we were lucky to find a tiny table for two unoccupied in the space between two large, celebrating families. Their mushroom soup is simply ambrosial. Directly across the street from us was Thierry Kepykla, an outpost of what by all accounts is Vilnius’ best pastry shop. We stopped in almost daily, buying baguettes, vanilla éclairs and the flaky rounds they call pain aux raisins in France. We had a very satisfactory meal down the street at the Sole Respublika by the square dominated by our herald, the angel born of the egg that now resides on Pylimo gatvė near Šv. Stepono. The picerija (or pizzeria) on Paupio gatvė just across the street is always busy. Užupis Kavinė occupies prime territory on the Vilnia by the bridge entering the Republic. If you need to stock up on kitchen basics, there is a small Iki grocery store on the corner of Užupio and Paupio. On Saturdays, a farmers’ market bustles just over the river from the Paupio bridge. 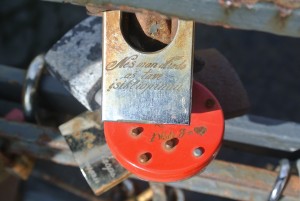 Must locks be affixed to bridges?

One morning I went out shopping for the kids; got distracted and came back with something for myself. I loved “peupeu.eu.” funky designs and total comfort. Nothing was quite my size, however, although the proprietor said to send my measurements and she would sew me up whatever I wanted. I believe I will. Then I stopped at “Touched by Alice.” It was just…so…odd. But I poked through the rack and asked about sizes. Everything was “one size fits all”? Really? I don’t know if that is true but I tried on a couple of things that fit me—and if something fits me it fits a lot of people of larger proportions. Came home with my “hairy Lithuanian sweater.” Pink and multicolored, nubbly, different. I love it.

One evening, my Dear One and I went for a stroll, just to see what was there. We wandered into private nooks, courtyards demarcated by apartments and homes similar to ours. Some of them were projects waiting to happen—masonry ruins looking for a vision supported by deep pockets. Wish our pockets were deep. We walked along the Vilnia and thought wistfully about living on the river’s edge. My Dear One is not a city person but I could see him contemplating the possibilities. There are certain charms for me in city living and I could, as they say on those television programs, “see myself” a member of this neighborhood.

On our last day we packed up, left Užupio 26-11 and drove across the bridge. A parking spot on Marionio gatvė kept us within eyeshot of the Republic. With a couple or three hours to spare before we needed to be on our way to the airport, we wandered into the gardens behind the Bernardin.

It was a glorious morning all blue skies and warmth. Children and elders bloomed with spring flowers in the sunshine. The Vilnia burbled between the park and the steep hillside beyond. A light breeze kept us cool. Should we climb up the Kalnia Hill to the Three Crosses? I dunno. What do you think? It’s a pretty steep climb. You’re willing to take a shot? Well so am I. 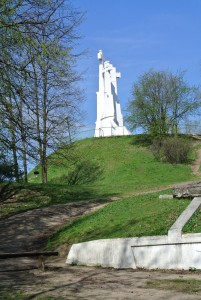 The wooden steps had seen sturdier days but we began the hike, pausing every so often to catch breath, to look out over the scene below. Eventually we reached the summit, at about the same time as a group of Japanese tourists. They did not stay long and we had the place to ourselves as well as a 180-degree of view over the city.

But we could not stay.

We stepped cautiously down the creaking stair, ambled back through the park, and spent our precious final forty minutes at a table outside the Užupis Kavinė. Fresh salads. Two last glasses of Svyturys Memelbrau. The last notes of the Vilnia’s burbling song in our ears. 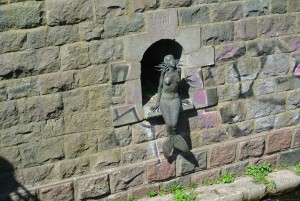 Mermaid of the Vilnia