Researching my Dear One’s Family Tree has been, shall we say, a slow process. Facts and documentation, though, when found, bring a thrill, a surge of excitement that renews belief that the project isn’t fundamentally doomed.

The problem is two-fold.

Records pertaining to impoverished Lithuanians who immigrated to the United States from the 1880s to the 1920s are, shall we say, fragmentary. These people were often illiterate, couldn’t always communicate their own names, and their identification documents and tickets were rudimentary. They embarked often in Germany, sometimes stopped in England or France, and much was lost in translation. In the United States, names were misspelled, shortened and changed and details scrambled.

The key piece of paper, however, remains the ship manifest. It conjoins name with year of immigration, place of embarkation and debarkation, and all-important information about where the individual was born, where he was living at the time of immigration, the name of the closest relative left behind in that home town, the specific destination to which the émigré is headed and often the name of the person waiting to welcome her in the US.

The ship’s manifest is the Holy Grail of documents for the genealogist.

My Dear One has four grandparents and a mother who theoretically should show up on manifests. His maternal grandparents can be tracked; finding his mother required a more complicated search and we finally found her listed as “male” and “Bronė” misspelled as “Bunrich.”

The fact that we are in contact with cousins in Balbieriškis in the Kaunas region means that we know more about his maternal line, the Levinskas and Kurpavičius clans. Among the cousins, moreover, there is still some living memory and that is invaluable. At a family dinner we met Marijona who has begun work on her own tree. She started with her mother who is ninety years old (and possessed of an impressive memory) and debriefed her in detail. I can tell from her notes that she has much material I do not. An information swap is underway.

Details such as the ones Marijona and I have assembled make it possible to move on to the National Archives in Vilnius and see what shakes loose there. And for my Dear One’s maternal line, a few things did indeed shake loose at the Archives.

Lacking a convincing spelling of a name and a secure place of origin, however, lost ancestors remain lost and the Archives will not consider taking so much as a look. So the Tamkus and Zigas lines were looking pretty hopeless. Then an old post on the Fodor’s website directed me to a fellow, Vilius Vaseikis, who runs a business called “Lithuania Visits” helping people like my Dear One sprout that tree.

I laid out my research problem to Vilius, sent him copies of my reports from Family Tree Maker, and forwarded scans of the scraps we got from Church archives in Scranton, Pennsylvania, and Baltimore, Maryland. Vilius was dubious that any success was to be had with Tamkus, unless and until we could pin down a village or other place of residence. Zigas was another matter.

Zigas, he said, was a name common in the Dzukija ethnic region in southern Lithuania, an area that includes the village of Balbieriškis. I hadn’t been able to find any immigration records for Ona Z but a pair of her siblings, brother Jurgis and sister Marija, did appear on a ship manifest, destination Baltimore. More importantly, in legible handwriting, their home town was list as “Puny.” Could that be a variant of “Prienai”? No, Vilius said, it was probably “Punia,” a village just upriver on the Nemunas from Balbieriškis. 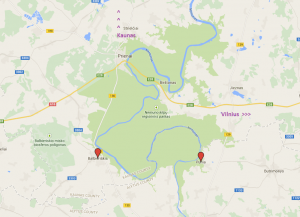 the loop in the Nemunas

It was straight to Google Maps. There’s a big oxbow in the Nemunas there and the villages sit on the opposite banks of the river and on opposite sides of the bulge.

I was all a-twitter. I arranged with Vilius to see what he could find on our Zigases and hope that somewhere along the line the name Tamkus would just show up. Meanwhile we added Punia to our itinerary.

What did we expect to find there? Well, a really lovely old church, an ancient mound and a cemetery. We hoped that in the cemetery there might be names: Zigas and maybe even Tamkus.

We found Zigas, several stones with that name. We also found a cluster marked “Cipkus.” Now that was interesting. My Dear One’s Great-Uncle Juozas Tamkus had also immigrated to Scranton, and there he had married Justine “Susie” Cipkus. The folk who went to Scranton predictably married other Lithuanians—but not just any Lithuanians. There seemed to be a clannishness, a preference for partners who came from the same or neighboring villages. Connections may or may not have been forged in Lithuania prior to arrival but families not already known to each other were certainly friends of friends.

Those roots have life. They are generating branches.