The most common comment on any report card I received in elementary school was, “Ellen would do well if she would just learn to follow directions.” Teachers stopped saying that as I got older but only because the grading system was about the mark and not about any insight into my approach to learning and life.

They were right, all those teachers. I don’t really listen to instructions nor do I internalize the approach and go with the flow.

My Tattooed Boy was insistent about the importance of “staying left” as we exited I-95 south at White Marsh. Our destination was the Park-and-Ride more or less behind the IKEA store. As it turns out, neither my Dear One nor I had been to this mall area since the highway and exits were entirely reconfigured and that unfamiliarity did not serve us well. We slid off the highway on the ramp for route 43 and simply followed the sign for “White Marsh.”

We ended up on the wrong side of the barrier that funneled traffic bound into the shopping areas from the road we were on. So I u-turned at the next light, came back and all was well. But it could have been easier if I had listened to the Tattooed Boy. 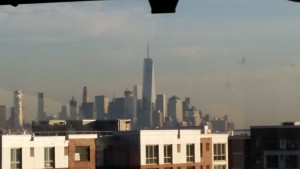 first glimpse of the Big Apple

The Megabus was part of the adventure: a two-decker bus that would get us to New York and back with reserved seats for $60? Pretty good, that. Amtrak stops at the Aberdeen station about a mile from our house, but two round-trip senior-fare train tickets would have run us $224 at minimum. More convenient, maybe, but more money. Leaving from Wilmington DE didn’t improve the costs and added a fee for parking. And the departure schedules were ghastly. Driving the car probably comes to about $50 round trip including gas and tolls, but that means staying at our preferred Hampton Inn in Secaucus NJ. Comfortable and easy to get to, with free parking and free breakfast, but then there is the travel in and out of Manhattan, and the point of going to the Big Apple was to be comfortable enough to really enjoy the Big Apple.

Megabus is definitely the good deal.

The drop-off is at 7th Avenue and West 27th street. Except that I read that as drop-off/pick-up. There were lots of little Megabus icons scattered around and I looked at those but I didn’t read the first and most critical description of the pick-up locations in New York: “The Megabus stop for all departures is located on 34th St between 11th Ave and 12th Ave across the street from the Javits Center.”

So there we were at 7th and 27th at 3:15 with our scheduled departure at 3:30. I was just back from my search for bottled water and travel snacks that had taken me to the Whole Foods on 7th Avenue and 24th Street. There were buses coming and going but no obvious arrangement for boarding. I inquired of the fellow slinging luggage. No, he said, departures were from West 34th and 11th Avenue.

Crap. We had just picked up our luggage at Schwartzes Luggage Storage, a luggage storage place, on West 37th and 9th Avenue.

I leapt at the cab that happened to be paused nearby. We piled in and I said, “We have to be at the Megabus at 34th and 11th in less than 15 minutes.” Bless his heart and driving bravado, we arrived with an entire minute to spare. 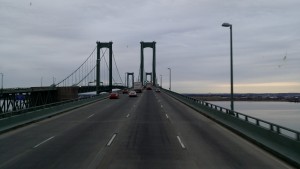 The ride back was exceedingly relaxing. I played with my phone and wondered how the kid in the adjacent seat was creating all those adorable posts that combined videos with text and graphic overlays. I gazed at all the views invisible from the driver’s seat of a car. And when we arrived at White Marsh, I noted that the bus driver kept far to the left, just as my Tattooed Boy had told us to, and that there actually was a sign that said “White Marsh Town Center” and directed vehicles going our way onto the circular ramp custom-constructed to get us where we need to be.