Beautiful Blue Danube 8: There and Back

Was getting a bit worried we weren’t going to get out of Budport. No, not a bar for rowdy boys but Budapest Airport aka Liszt Ferenc Airport.

We are charmed that the airport is named for one of Hungary’s creative greats. Sort of like Rome’s Fiumicino being Leonardo da Vinci. My Dear One and I concur that travel hubs should be named after artists and not after politicians. It’s not that artists are without their foibles but they–particularly those who created very great works and are very long dead–are easy to embrace and unlikely to have ugly bits of personal information subsequently emerge.

But back to the trip.

Business and First Class had two agents checking them in and that line was both short and speedy. Economy had one hapless fellow working desk 3. I finally started timing him. On average he was confirming reservations and checking in bags for one pair of passengers every 15 minutes or so. Three young red-shirts from Viking Cruises were there to help us as busloads of departees arrived, and even they were looking a little nervous. The lad with the man-bun chatted with a supervisory type and finally desk 4 opened. Then desks 5 and 6 and the fellow at desk 3 was relieved by a woman better able to work the system.

Budport also has the most rigorous security I have evah encountered. While standing in line I watched amusing animations intended to educate passengers about how efficiently to clear that hurdle. Felt I had a good grip on what to do. Out came the tablet into its own bin, my satchel that passes for a purse went into another, my carry-on into the third. When the woman ahead of me put her watch in a bin, I unbuckled mine and tossed it in with the tablet. So far so good.

Then I set off the buzzer. I got patted down top to bottom, front and back. My bra was carefully investigated and hands went up under my tunic and around the waistband of my leggings. Then I was wanded front and back. Finally, I was sat in a chair where I removed my shoes to undergo a careful examination of my feet, after which my shoes were evaluated. All very businesslike but yikes. Then I moved to pick up my bins. My carry-on was on the suspicious side of the barrier. I was asked to open it. The agent explored the contents, noted the cameras, which I unpacked for him. The entire contents of the bag were spread out and sent back through x-ray.

Meanwhile, my Dear One is looking at me from the bench where he has been sitting for ten minutes, utterly nonplussed.

My stuff and the bag came back down the not-suspicious side of the barrier. I repacked the case and we left security.

The nicest, newest, most spacious side of Budport is the gateside. Lots of shopping, lots of amusements, lots of chic. Perhaps they could put a few more resources into the departures area?

We arrived at Frankfurt–“Fraport”—feeling nervous. (Budport, Fraport. These seem to be standard abbreviations.) Our arrival from Philadelphia a week earlier had been, shall we say, a less than felicitous experience. 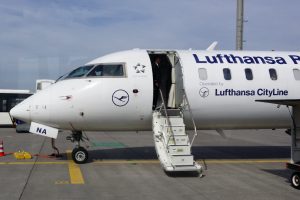 The Frankfurt-Main Airport is about a half-marathon from one end to another. Few planes, moreover, board passengers or deplane them at the gates. Most aircraft –from puddlejumpers to big Airbus trans-world workhorses–park out on the tarmac. Passengers are herded into buses (however many buses it takes) and taken to a place that appears to be in the middle of nowhere.

On the inbound leg we had disembarked onto a bus that drove us some distance to a terminal door. Next we were sent one way toward passport control. Then a fellow with a bicycle demanded the “A transfers” follow him. Some ten minutes of brisk walking found us at a different passport control. Once we cleared that, a sign informed us that the A gates were an “11 to 18 minute” walk distant.

Eventually we arrived at A-64. A couple minutes later we rode a bus for ten or fifteen minutes to our shuttle where it was lined up neatly with its fellows. Exhausted and disoriented, were were finally on the way to Nuremburg.

On the outbound trip (Frankfurt to Philadelphia) we started at the “11 to 18 minutes” sign and only had to get as far as Z-21. Once again onto a bus and from thence to the plane.

By the time were were about an hour fifteen into the journey, I was grateful for the double vodka-tonics my Dear One ordered.

We requested of the young couple in front of us that they not recline their seats all the way. Doing so reduced the space between our faces and their seatbacks to about twelve inches. They were surly and tried to tell us that we should just recline our own chairs. I pointed out that there were people behind us and that I was only asking that they find a happy medium, recline less, give us a little more room. With poor grace they acceded.

I totally get how episodes of rage break out in the cheap seats.

It’s a full plane. If they eliminated a row or two of seats in economy, that would be a significant reduction in fares as we are eight seats across. But just imagine the good will that Lufthansa might incur.

And it seems that squirming my way down toward my bag dislodged the wonderful green leather coin purse my Dear One bought me in Venice and which held a wad of euros. Wish I could get the coin purse back.