On the Erie Canal 2: Not Quite As Expected

I don’t know, because I have never used a dating site, but this must be what it feels like when you show up for that introductory coffee and the person waiting for you has only the vaguest (and not in a good way) resemblance to the picture that originally caught your eye.

Hotel Utica Lobby as presented on the Expedia website

According to the description, the Hotel Utica (opened in 1912) was recently renovated to its 1920s glory. The photos exuded an appealing retro pizzazz: soaring ceilings, sparkling chandeliers, elegance to spare. So I was up for it.

There were a couple of rational reasons to stay there, too. First of all, there was no Hilton group hotel in Utica with an available room. Gawd know why. In addition, Hotel Utica advertised free parking and breakfast. We could patronize one of those interesting eateries I had found while researching the city. Then, of course, Utica moved us past our final destination of the day, Fort Stannix in Rome, and into the immediate local of our next day’s destination, the Munson Williams Proctor Arts Institute.

We spotted the hotel sign as we ramped off route 49 but the block the building occupied looked like Isis had just been through. Disturbing. Was that bombed-out lot supposed to be the parking area?  Hand-scribbled notes saying “Guests use other entrance” were taped to the doors on Seneca Street. The entrance on Lafayette was entirely blocked by equipment and trucks. 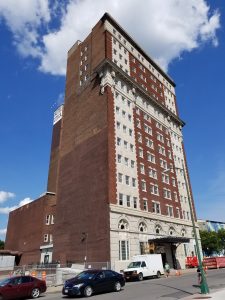 I parked across the street and left my Dear One with air conditioning and music while I went in to investigate.

What a mess. There had to be a couple dozen workers laying new floors, schlepping materials and doing other things. Yellow tape and barriers blocked off most of the ground floor. There was dust. There was mess. The young woman at the desk said in a voice that lacked confidence, “But the rooms are brand new.” 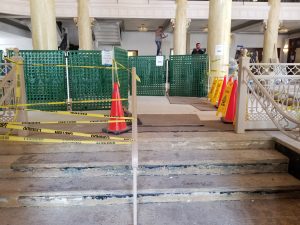 Maybe they are, but this is just not what I had paid for. It certainly doesn’t match the image of the lobby on the hotel website. We aren’t light travelers—a camera bag, computer case, suitcase and carry-on filled with miscellany are always with us in the car. And a cooler with our supply of vodka, tonic and limes. We normally unload onto a luggage trolley. How were we to get all that, creaky and aged as we are, up all the steps, past the barriers, across unfinished floors to the elevators?

I canceled and, having conferred with my Dear One, made my first-ever reservation using an app. Fortunately the Hampton Inn back in Rome, twelve miles or so away, had a room.

After a strong-ish drink and dinner, I took to the Internet to see how I had been led astray.

The picture of the lobby on the Hotel Utica was a fake. I don’t know whether it is doctored or whether it represents the lobby at its gleaming finest at some time in the past, but it is way beyond misleading. 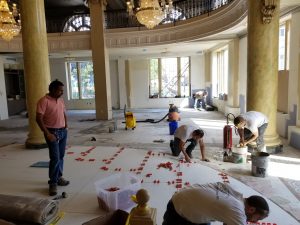 Turns out that the Hotel Utica is also the Doubletree on the Hilton site advertised as “opening soon,” which is to say after October 15, 2017. Same photographs, same text. Seems that Hilton doesn’t want to lay claim to that mess even though they own and operate the hotel. By forcing me off the Hilton Honors website (we are members) they also get to collect my money without allocating points to my Dear One’s account.

Once home, I called Hilton to complain. The first person I got seemed confused. It took a while for her to grasp that I felt bamboozled and why. She sensibly moved me on to an executive in the appropriate department. That woman was smart and funny and, once she compared the two websites to see what I was seeing, agreed that it looked indeed like rather like bait-and-switch. She couldn’t recall a similar circumstance in her experience and would be passing the information along to her higher-ups.

Meanwhile—although it wouldn’t undo my inconvenience—she would put some points in our account, if that would be okay by me. 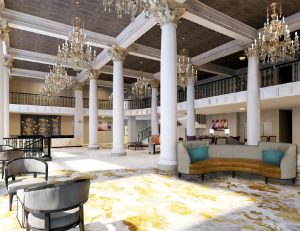 Yes, thank you, it would certainly be okay.

We don’t expect to return to Utica any time soon—but if we do, I might well book a room at the Doubletree by Hilton Hotel Utica. I think, after all, it will be dazzling. Next time I book anywhere, though, I am going to check review sites. Tripadvisor made it abundantly clear that now was not the time to get a room at that particular inn.