On The Erie Canal 3: The Saints That Guided Us

The more we travel, the longer our list of patron saints becomes. When our divinities—not all of whom, we believe, have made themselves known– bestow grace, we appreciate our good fortune. When they are cranky or generally feeling punitive, appeasement is not an option.

Prominent among them are:

San’Verde and Saint Espace join us in our daily life. Some saints occasionally work as tag teams. On the jaunt along the Erie Canal, San’Serendip was along for the ride.

history of the bridge

Of course one must be alert to communications from above. As we glided along the curves of New York’s scenic route 13 toward Ithaca, past farms and homes and patches of woodland, a sign told us a “historic covered bridge” was coming up. I slowed. My Dear One and I considered what to do. Was this a sight just around the corner? Maybe it meant “If you go down this road and have persistence in looking around, you will eventually arrive at the advertised destination.”  We swung right.

Newfield Bridge, barely a moment off route 13, crosses the Cayuga Creek and brings one into Newfield Hamlet. There is parking for a handful of cars and a scenic overlook dedicated to Marie and Grant Musser for their tireless efforts in preserving the bridge. Danged if San’Serendip wasn’t also inviting strangers along on our happy detour; they parked two very large SUVs so as to block the best camera angle on the bridge and then kept loitering in my pictures.

A left turn about twenty yards away brought us back to route 13 and back on our way to Ithaca.

Saint Accomode was whispering in San’Serendip’s ear when we arrived in Utica (see “On The Erie Canal 3: Not Quite As Expected”). Having retreated to Rome from our intended lodgings in Utica, we programmed Bridget, Ruby Rav4’s GPS, for the Munson William Proctor Institute. Route 49 is the main drag between the two towns and as we resumed our travels eastward, another sign beckoned: “Lock 20 State Canal Park.” What the heck. We had plenty of time before the museum opened.

Down River Road we went. And went. And went. And then we were crossing the line into the City of Utica. Somehow we had missed the turnoff. Bridget seemed lost so I consulted the map on my mobile phone: there it was. Using both devices, we managed to get back to River Road, this time moving at a diminished speed and searching for anything that would point us in the right direction. There it was, the sign, embraced by tree limbs, draped in August foliage and all but invisible.

Lock 20 is on the New York State Canal System, not exactly on the Erie Canal. This is the relatively new stretch that conjoins the Erie Canal in the area of Utica with Oneida Lake farther west. This morning was quiet, glassy waters reflecting true blue sky. Clearly Sainte Temps was smiling. A boat was moored at the dock, and passengers stirred from their night’s rest. A fellow came out of a tent pitched next to his truck with a fishing rod and bait. Not noticing warnings to stay on our side of the fence, we walked along the embankment, studying the machinery of the lock, imagining the pleasures of a modern float down the canal. A lock employee arrived to attend to his duties; we left, a little regretfully, the peace and calm.

Finally we were on the outskirts of Montclair, New Jersey, headed home to Maryland from Albany, New York. Our plan was to stop for lunch and a pop-in at the Montclair Art Museum. Bridget was guiding us but for some inexplicable reason we took a turn that we thought was right and she clearly thought was wrong. Bridget was right but patiently recalculated the route to the museum sending us past stoplights that San Verde was not inclined to turn in our favor. As we came into the center of Cedar Grove, several restaurants advertised their offerings: deli, sushi, pizza. It was a few minutes past eleven; we were hungry and tired of sitting. We pulled into a convenient lot and hoped the sushi place was open. 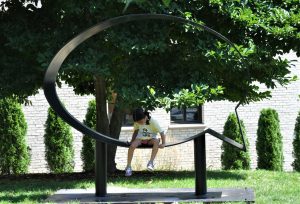 It was open and Kyoto Sushi III served us the best, freshest and most generous sushi-sashimi combo we have ever had. It was fantastic. And not expensive.  We thanked Saint Comestiblé and San’Serendip both.

The Montclair Art Museum was half closed off, but then it always is. Somehow in four tries we have never been able to time a visit when all the galleries were filled with art.

But no matter. The saints that mattered were with us.