I had known the exhibition was coming, noted it when it opened and then was all but resigned to missing it, as I do so many shows. But no, My Dear One and I occupied that empty day between Christmas and New Year’s with a drive to the Barnes Foundation. 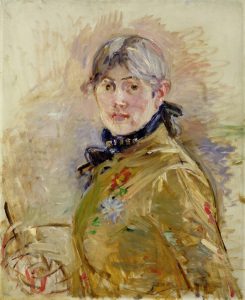 Damned awful title they gave it: “Berthe Morisot: Woman Impressionist.” It sounds rather like a drag act, as though a performer with that stage name does impressions of women. In the art world, of course, women are judged by how well they impersonate their male peers, in their drinking habits, their carnal behaviors and, of course, their artistic expression.

I wanted to see the exhibition because, while I am not a particular fan of the Impressionist movement, which is too soft and squidgy and Romantic for me, I do like the work of Edgar Degas (1834-1917) and Berthe Morisot (1841-1895). Both seem to wrestle with the nature of painting, the problems of pictorial structure that exist in a tenuous relationship to transient perceptual experience. Degas is the great master of course, and the painter who rarely engages with the individual but finds in human activity the patterns and spaces that inspire him. Morisot also distances herself from the figures who are her subjects—and yet her subjects, so often women and girls, offer an iconography of social constraints. These constraints, however, seem to highlight the strategies intended to weaken them, , the tactics devised to cope with particular situations, which must be devised by all women.

Morisot said famously in 1890, about twenty-five years into her career, I don’t think there has ever been a man who treated a woman as an equal, and that’s all I would have asked for—I know I am worth as much as they are. Her irritation and impatience are audible. Her complaint is certainly about those men—Claude Monet, Pierre Renoir, even Alfred Sisley and Camille Pissarro—whose signatures accompanied hers on the document that created the “Société Anonyme cooperative à capital variable des artistes, peintres, sculpteurs, graveurs et lithographes,” or a joint stock company one might call “Artists Inc.” This was the structure that made possible the exhibition that incited the epithet “impressionists.” 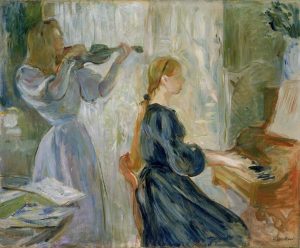 These upstarts shocked critical and popular sensibilities with their first exhibition in 1874. By the eighth and final show in 1886, there were few of the names one associates with impressionism—only Morisot, Degas, Pissarro and the American Mary Cassatt—and none of the movement’s icons, such as Monet and Renoir. The emergence of the Symbolists, those artists who saw themselves working in an imaginative realm quite opposite the realism in which impressionism was rooted, is evident in the checklist. The new generation is that of the postimpressionists, of Paul Gauguin, Georges Seurat and Odilon Redon. The flattened shapes, languorous curves and a sense of dematerialization one associates with the postimpressionists and symbolists emerge in Morisot’s paintings of the 1890s. Was she looking at Edvard Munch by that time? She was not, I think, benefitting creatively from her close friendship with the increasingly reactionary Renoir.

There were many questions I came to the exhibition with and almost none of them were answered. “Berthe Morisot: Woman Impressionist” turned out to be a thesis long on emphatic assertions and short on new perspectives and nuanced discussion.

The labels were thin and dull with few stories or insights, little that might pull one in to examine more closed any particular work. The thematic organization of the installation raised ideas but did not elucidate them. The arc of Morisot’s development from the student of Camille Corot (1796-1875) and the acolyte and later sister-in-law of Édouard Manet (1832-1883) through explorer of impressionist light and color to tentative symbolist was largely ignored. 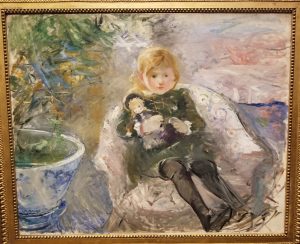 Most peculiarly absent was that part of the story that focused on Morisot as a “Woman Impressionist.” Her sister Edma had also been a painter who, the text claims, “gave up her professional ambitions after marriage.” Did she really? And if Edma was no longer painting, was she not discussing painting as she still sat for pictures Berthe painted? What impact did her sister’s choices have on the life Berthe chose to lead? 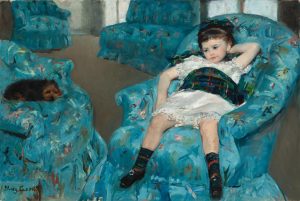 What about her social peer and artistic colleague, Mary Cassatt? The two occupied similar rungs on the economic ladder, faced similar challenges in choosing the painter’s life, chose comparable subjects (women and children, bourgeois settings and domestic landscapes). Does Morisot’s Young Girl with Doll (1884), which is in a private collection, speak to Cassatt’s Little Girl in a Blue Armchair (1878) in the National Gallery in Washington DC?

What about that free spirit, Suzanne Valadon, in the 1880s one of Renoir’s most valued models and later an accomplished painter working in a distinctive and sensuously realistic style? Valadon also worked regularly for Degas and Pierre Puvis de Chavannes (1824-1898), both friends of Morisot. Unscalable social barriers might have existed between Morisot and Valadon, the respectable married mother and the disreputable unmarried mother. We know that Valadon knew of Morisot and was affected by her passing in 1895. Might that familiarity have gone both ways? Renoir could have recommended Valadon as a model to Morisot, as he did to others.

The exhibition was launched at the Musée National des Beaux-Arts du Québec; from the Barnes it will travel first to the Dallas Museum of Art and then it will close at the Musée d’Orsay in Paris. Dallas has planned a two-day symposium replete with eminent scholars. That won’t change the dreadful title of this exhibition. Maybe, however, it will offer someone something that I certainly felt lacking.