The Painter and Modern Art

I think the studio teacher said something like “What is that supposed to be?” during a painting critique.

The comment is a variation on an old, old theme in since “Modernism” earned its capital M: “whatever you are doing, it clearly doesn’t meet the standards of ‘good art’.”

The Impressionists earned their name from hostile reviews that said “Bah! They are nothing but impressions” and describing works as “palette-scrapings.”

Rodin responded to criticisms of the design commissioned for the city of Calais, France, the magisterial Burghers of Calais, saying “I read again the criticisms I had heard before but which would emasculate my work [and] submitting to the law of the Academic School… I am the antagonist in Paris of the affected academic style… You are asking me to follow the people whose art I despise…”

No less singular a member of the avant-garde as Henri Matisse was bemused by the paintings Georges Braque exhibited in 1908, grumbling about Braque’s “petits cubes” and inadvertently coining the term “cubism.”

Pejoratives have long made the most lasting descriptions in art history. Renaissance writers maligned the barbaric features of the “Gothic” period. Eighteenth-century Neo-Classicists denigrated the excesses of the “Baroque.” Modern artists tried to change that. In the twentieth century, artists from the Italian Futurists to the Dadas chose their own monikers. In 1950, Willem deKooning said, during a symposium attempting to analyze the goals and ideals of the new American art, It is disastrous to name ourselves. DeKooning and his peers got stuck with “Abstract Expressionists” anyway.

Art history has established that “good” art, in twentieth- and twenty-first-century terms, is “Modern” art. That means it is original, experimental, edgy, disruptive, and frequently unintelligible to all but a small group of intellectuals and dealers who make their livings parsing it and selling it. Now the great pejorative is Rodin’s “Academic.”

Which brings me back to Matt Adelberg, whose work so challenged his instructor. 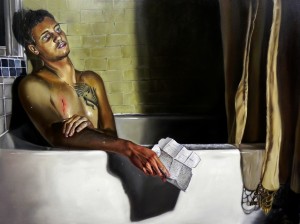 Matt is a painter, a real painter, the kind who thinks about color and light and space and how brush, palette knife, rag and other implements can cover a flat surface with paint in order to invoke form that carries meeting. He has a passion for the Old Masters: when I met him, nearly the first thing he said to me was that he was crazy for Caravaggio and that he had just read the 2010 biography by Andrew Graham-Dixon, a book I was part-way through. He demonstrated great appreciation for the artists we explored in Renaissance to 1855. He’s perceptibly less enthused in my Modernism and Beyond, but has found artists that pique his interest.

As an art historian I’m delighted that he wants to look at “old stuff.” As a gray-haired geezer, I love that there are young people enraptured by the idea of painting, the problems of representation, and the possibilities of expression. 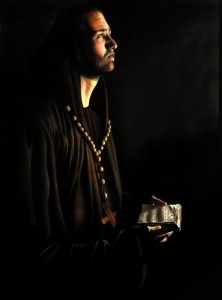 He is in his hommage phase of growth. He is inspired by Caravaggio, of course, but also by Francisco Zurbarán and Jacques-Louis David. Matt is filled with the passions and anxieties of the young; his emotions and aspirations are at the center of his universe and he has begun the thesaurus that will give him the wherewithal he needs to merge his universe with the cosmos, to find in the personal a metaphor for the universal.

In this day and age, it is hard to grasp even the idea of art. Painting and sculpture have moved over to make room for video, digital mediums, and performance. The possibility of the lasting and archival has made way for the ephemeral and its attendant documentation. Concept is elevated and execution is often given short-shrift. Grandiose ambition is applauded even when it is mainly grandiosity.

And “Beauty”? The closing lines John Keats wrote in his Ode on a Grecian Urn are often all we remember of the poem, but perhaps there is a reason for that.

When old age shall this generation waste,
Thou shalt remain, in midst of other woe
Than ours, a friend to man, to whom thou say’st,
“Beauty is truth, truth beauty,” – that is all
Ye know on earth, and all ye need to know. 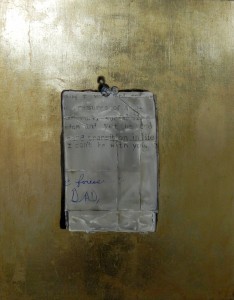 Truth and beauty cannot really be severed, at least not in my mind. Truth is not an absolute, something that can be quantified or framed in language suitable for FaceBook likes or bumper sticker proselytizing. Beauty is not a condition of prettiness, a quality of optical seduction. Truth can be harsh and beauty can be searing.

Matt walks the secure ground of his own truth now. That has given him a good start down the rocky and challenging trail of truths we all share.