On The Eve Of The First Democratic Debates

Twenty-four? Twenty-five? The special supplement to The New York Times lists twenty-two. And I thought seven candidates was a lot in 1992. The first “debates”—which is to say the first round of televised statements sanctioned by the Democratic National Party—will showcase twenty of them, those that cleared the bars of name recognition and fundraising. I think in general that is a reasonable bar, for most of them will forever be trees crashing in the deep woods where there has never been anyone to hear the noise they might or might not make. 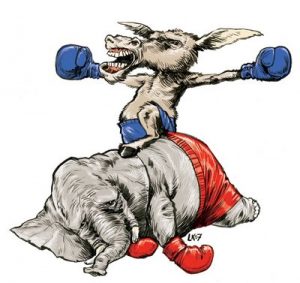 At this point I am just watching and listening. I want the Donkey Triumphant, the asinus triumphantes, after the 2020 Convention to crush TRE45ON and even more to unite voters sufficiently that there are some coattails turning seats from red to blue in both the House of Representatives and the Senate. A lot of seats. Especially in the Senate. Everything is at stake but I have only two words to offer, the same two words I kept screaming in 2016: Supreme Court.

At present, the list of candidates in descending order of viability is as follows.

Senator Cory Booker, 50, Mayor Pete Buttigieg, 37, Senator Kamala Harris, 54, and Former Representative Beto O’Rourke, 46, and are in the next pack.

Representative Seth Moulton, 40, and Governor Steve Bullock, 53, missed the cutoff for the first debate. While not listed in the Times, so did Mayor Wayne Messam, 45, Former Senator Mike Gravel, 89, and Former Representative Joe Sestak, 67. 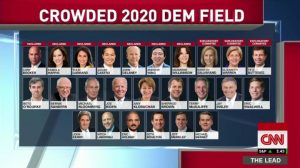 Are their ages important? Yeah. At 67, I am finding it hard to get behind a candidate who has crashed the eight decade. We need to look forward and that means finding a candidate with an understanding of where we came from but with eyes, heart and mind fixed on where we might possibly go.

If I were speaking for the DNC I would start by instructing Reps. Gabbard, Moulton, Ryan and Swalwell, and Gov. Bullock, to forget about the presidency in 2020 and focus on keeping their seats, developing seniority for progressives like themselves in the Party, and working to flip as many red seats in their state, whatever the office, to blue. Creating the votes that ensure that a Democratic president can actually get something accomplished, because it is abundantly clear that obstruction will remain the Republican modus operandi for the time being. Sens. Bennet, Gillibrand and Klobuchar? Frankly, your greatest short-term value is as Democratic senators. Yes, it breaks my heart that I cannot get behind Gillibrand, a fellow alumna of Emma Willard School. But I can’t. Not in this primary.

Those running who have never held elective office, or not held office recently? Go back to doing what you do well, raise campaign funds for other Democrats and otherwise get out of the way.

That would reduce the field by fourteen. The group would still be too large but at least we voters could begin to distinguish between candidates and benefit from organized, meaningful debate. I truly hope that after the pair of “debates” in Florida, the field is winnowed to a maximum of ten. Those who would extricate themselves from the fray would be, in my opinion, making a selfless act of patriotism and setting the best of examples.

As for the next few weeks and months of the primary campaign, I ask only this. Don’t go out of your way to dig dirt that will ultimately be useful only to the GOP for the mud they intend to sling. Be clear that Trump is an incompetent and unethical president, but do not make this all about running against him. Make yourself and the Democratic Party stand for something: healthcare, jobs, dealing with climate change, education, decency, freedom, and American values in general. 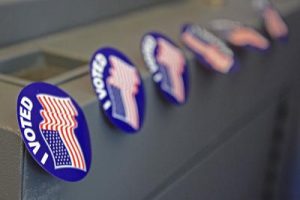 You white candidates? Stop acting as though you really know what systemic racism is all about because you supported civil rights in the past. Uncle Joe, I am talking to you. And Mayor Pete, the African-American citizens in your city are up in arms because you are clueless and not making any real effort to hear them.

Sen. Klobuchar, figure out why your interactions with your staff are abusive and stop it. Stop it right now. That is Trump’s bag and I will never countenance it in a politician from my own party.

Sen. Warren, I know I do not have to invoke the word “Pocahontas” for you to understand how have you brought unnecessary s*** down on your own head. Those white papers are excellent; keep it up but keep it real and within the realm of the possible.

Sens. Booker and Harris, God love you both, you have succeeded in the past by being authentically who you are and keeping your noses to the grindstone. Cory, put down the weights—that’s just asking for ridicule. Kamala, don’t run risks being clever. I love it when you are clever but I love it even more when you are precisely right and deadly in aim. 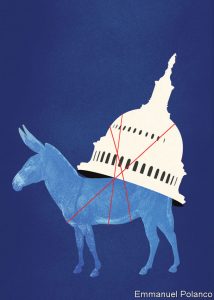 Beto O’Rourke, it takes more than a dazzling smile and Spanish as a second language. Sen. Gillibrand, you have changed camps on guns and the Second Amendment and you have been quick to condemnation, as you were with Sen. Franken. Don’t be in such a damned hurry to be out ahead of the crowd just because it allows you to stand in the spotlight of empty space.

And Bernie. I get that you aren’t really a Democrat and there seems to be some issues there in playing nicely with them. You really contributed to Hillary’s loss in 2016 because you handed–gift-wrapped–a damaged Democrat to Trump to chew on. You successfully suppressed Democratic turnout. You really f***ed things up. While Trump’s election wasn’t all your fault, you made a significant contribution to his campaign. I only pray that no Democrat this time around does a Bernie on whoever emerges as the Party’s candidate in the general election.

I know who I would choose were the election tomorrow. We will see how long I stick by that person.

I know who I will choose in November 2020. I will choose whatever Democrat heads the ticket. Let’s do what we can to ensure the asinus triumphantes emerging from the Convention in Milwaukee will kick TRE45ON’s ample derrière.