And Then There Were Two

Last year and the year before, mostly in the colder months when leaves litter the ground, a red-shouldered hawk (Buteo lineatus) frequently lounged in a tree a little to the southeast of our house. Not all the time, but just at the moment daylight arrives. The tree, like so many in that nontidal wetland behind us, is dying from the top down so he’s easy to see. I named the hawk Rufus; we name all our creatures. I often hear him vocalize–“KEE-aah“–when I fuss in the garden, and occasionally catch a glimpse as he soars through the canopy.

on the sofa and out of focus

It became a habit to glance up at that tree every morning when I fetched the newspapers or returned from a walk, and every so often he will be there. Often I look through the field glasses, especially when he basks in the xanthous glow of the rising sun.

A couple weeks ago, to my surprise, there were two hawks there.

They sat companionably close on a slightly lower branch of the tree, a sofa branch, a bit below the pedicle Rufus prefers. They seem about the same in size, similar in markings.

There had been no event that thrilling since some years back when I startled a fawn hiding under the astilbe in the front garden. Dazzled, I ran in and grabbed My Dear One’s small camera with the long lens and took a picture. A bad picture as it turned out because the dial was jogged onto the “timed photo” setting.

Adults are colorful hawks with dark-and-white checkered wings and warm reddish barring on the breast. The tail is black with narrow white bands. Immatures are brown above and white below streaked with brown. All ages show narrow, pale crescents near the wingtips in flight. 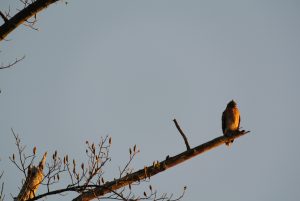 Carmina Burana in the northeast tree

It was perhaps a week later when I stepped outside the door just as a red-shoulder swooped in front of the house, perhaps twenty feet off the ground. It came to rest on a high branch of another half-dead tree. Owl-like, my head swiveled back toward the tree where Rufus was wont to rest. And there he was. So this other bird had to be the new friend. 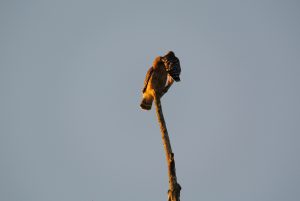 billing and cooing on the pedicle

Back I dashed to the kitchen table to grab the camera, this time making sure it was set to take a single photo. I took a picture of the newbie. Then I turned and took a picture of Rufus. Then I turned back in time to see the newbie lift off and glide over to where Rufus calmly sat. After a moment of hawkish billing and cooing, newbie sailed away and out of sight. But what to name her? Rusty has been allocated to red-breasted nuthatches. Rosie? Carmine? Am I sure it’s a girl? Both birds look mature; I do so hope they are a mated pair. So she has become Carmina Burana.

While I live for the cooler months of the year, I am also sorry when the leaves drop because then I see the houses, whose lights glitter into the night, on the opposite side of the woods. This year, however, is different. Have Rufus and Carmina built a home where I can see it?

Nests are typically built at a crook of the main trunk in deciduous trees, more than halfway up the tree but within the canopy. Both males and females are involved in nest construction.

And maybe next spring we’ll see a little Orff take to the sky.