They Keep Pouring that Whine

The triumphs of Senators-Elect Reverend Raphael Warnock and Jon Ossoff in Georgia were the best birthday gift ever. Their swearing-in will demote Mitch McConnell to Senate Minority Leader; his pocket will no longer entomb bipartisan legislation. This does not guarantee the positive change so many of us hope for from the Biden-Harris administration, of course. It does, however, clear a few obstacles from the legislative road. 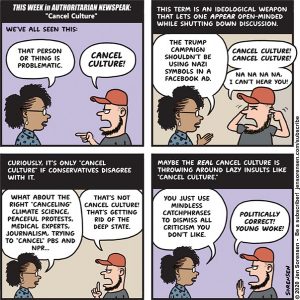 An article in The New York Times quotes soon-to-be-former Senator Kelly Loeffler whining about “cancel culture.” She co-owns the W.N.B.A. team the Atlanta Dream, a team whose players dislike her, her politics and her values. Loeffler objected to their support for the Black Lives Matter movement. She was angered by players promoting the campaign of her election opponent, Reverend Warnock.

“Cancel Culture.” There’s a phrase I would like to see canceled in 2021.

The white, male power structure of this country has been engaged in systematic Cancel Culture since the get-go. The Founding Fathers allowed enslavement of Black people, canceling their humanity entirely. Among other parts of culture canceled was the culture of marriage and family. Then the Founders agreed that an enslaved individual was three-fifths of a person, cancelling two-fifths of their political being.

The voting rights of African-Americans are still being canceled today. Opportunities for education, financial advancement, even home ownership are still systematically undermined. Legal systems across the nation are applied in such a way as to cancel the lives and futures of too many people of color. 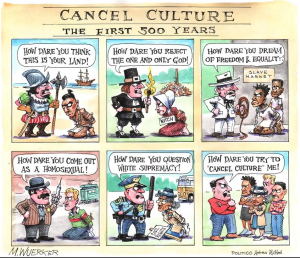 The cultures of Indigenous peoples were canceled the instant Europeans set foot on this hemisphere. White invaders made and broke countless treaties. They celebrated genocidal massacres and relocated Native children into White schools and families. Their goal was not just the extermination of the gene pool but the eradication—the total cancellation—of culture.

Women in general, too, know a little something about being assigned the value of a cancelled stamp.

“Cancel Culture”?  No. That is just an accusation flung at any suggestion that the heroes of dead White men might have feet of clay. The words signal anger when the accomplishments of women, members of the LGBTQ community and people of color join the mainstream of history. There is no grip tighter than the death grip of the status quo on their power and privilege.

A Day That Will Live In Infamy

On January 6, 2020, thousands of Trump’s most ardent supporters gathered in Washington DC. Their intent was to overturn the election of Joe Biden and Kamala Harris by any means necessary. Trump and his surrogates had been laboring for fully four years to convince his cultists that elections are rigged, that the press is the enemy of the people. Conspiracy theorists invented and disseminated lies–and fabricated evidence–of the fraudulence of any government action not blessed by Trump himself. Following Trump’s mantra of “winning,” they painted terrifying scenarios about the meaning of “losing.” 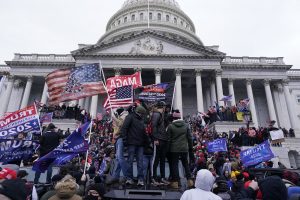 the Constitution under attack

Several recounts and the dismissal of sixty lawsuits came in the wake of the Biden-Harris victory. In anticipation of the certification of the 2020 election by Congress, Trump, his minions in Congress and assorted cultists laid a political bonfire and doused it in gasoline. The morning of the Joint Session of Congress, Trump (flanked by his capo Rudy Giuliani and his son Donald Jr.) put a match to that explosive heap. Eight Senators and one hundred thirty-nine Representatives in the GOP contrived to prevent certification, warming themselves at the conflagration.

Trump’s mob paraded from the Ellipse to the Capitol, broke through barriers, shattered windows, smashed doors, and vandalized halls and office, and laid waste to the laws of this country. They waved Confederate flags and firearms. It wasn’t a protest. It wasn’t a howl of patriotism. It was a temper tantrum, a riot, an act of terrorism.

Five people died. One of them an instigator of violence and member of QAnon. Another a veteran of the Capitol police who defended lives, our national heritage and our democracy.

It was an effort to cancel the Constitution. They fought to undermine the journey of this nation toward a more just and perfect union. The Party of Cancellation decided to eradicate democracy.

We will not, however, let that happen.