A Tale Of Two Funerals

I remember my mother glued to our old black-and-white television in November 1963 and Kennedy’s funeral procession as it wended its way ultimately to Arlington National Cemetery. I watched some of it—I was eleven—and remember the views of the caisson and the riderless horse, empty boots turned backward in the stirrups. The shock of the assassination lingered everywhere, in my house, in our church, in the community.

I didn’t really understand why my mother stared at that flickering gray footage. 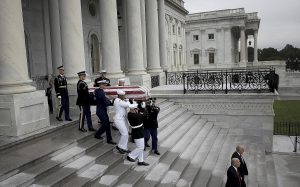 Military Honor Guard on the steps of the Capitol

On Saturday morning I started watching coverage of the McCain memorial at seven o’clock and did not move my eyes from the television until it had concluded, until the talking heads began rehashing the history that had just unfolded before me.

I was uncertain about the message conveyed as retired generals and Trump administration members Mattis and Kelly escorted Mrs. McCain from the Capitol to lay a wreath at the Viet Nam Veterans Memorial but I sensed the decency of the military family. I marveled at the in-the-momentness of the military honor guard who dealt with flapping plastic. When Ivanka Trump and Jared Kushner were shown to their seats with the White House delegation I was curious. What, especially was Ivanka feeling; did she feel any shame for the words and actions of her father, particularly since the last days of Senator McCain’s life.

a wreath for the Viet Nam Veterans from their comrade

As cameras scanned the congregation I named to myself every face I recognized, and there were many. The Episcopal liturgy began, familiar words, familiar rites; the first hymn, the Navy hymn, I hummed along, some of the lyrics coming back.

When Meghan McCain stepped to the pulpit, breathed deeply and then breathed fire on Trump, his base, and any American who would deny her father’s honor and sacrifice, the greatness of our nation founded on the highest human ideals, I sat riveted. This weeping woman was grieving something far more painful than the loss of an adored and loving parent.

One by one the speakers rose and songs were sung. Ms. McCain’s oration formed a mighty foundation on which a vision of American transcendence and McCain’s place in history formed a visionary architecture. Senator Joseph Lieberman, his friend; Dr. Henry Kissinger who honored his tortured years as a prisoner of war; President George W. Bush who bested him in an ugly Republican primary; President Barack Obama who bested him in a historical general election. All spoke of struggles, of discord and failure. All spoke of a shared love of this country and its people. All spoke of lasting respect, admiration, appreciation and love for John McCain. 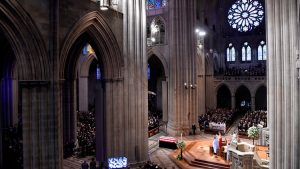 memorial at the National Cathedral

The national anthem, which the man whose name was never spoken once has made a dog-whistle for racist sentiment, was forgotten for the inalienable right, glorious landscape, and incontrovertible truths of My Country Tis of Thee, America the Beautiful and the Battle Hymn of the Republic.

I did not move from my seat in front of the television. I didn’t say more than a few words to my Dear One, sitting often next to me, occasional tending to tasks nearby.

I witnessed history. I saw, at least for a moment, a grand unity of patriotism, decency and sorrow that made me proud.

With the opening bars of Danny Boy, Mrs. McCain, whose dignity and stoicism had armored her upright, wept and bent into the comfort of her son John. Tears brimmed in my eyes and a lump ached in my throat.

My mother had watched all those hours commemorating the end of the life of President John F. Kennedy because she recognized, somehow, that she was not just audience to a particular performance but witness to historic change. There would be the time before the Kennedy administration; by the end of 1968, there would be the upheaval that followed the deaths of the Reverend Dr. Martin Luther King, presidential candidate Senator Robert Kennedy, riots, and the Democratic Convention in Chicago. Everything that followed belonged to a different era.

We are in the midst of cataclysmic historical change. No scholarly or journalistic analysis could better summarize that than the songs, readings and eulogies that celebrated the life of Senator John McCain. No call for decency and the moral height demanded of us by our founding documents and complicated, contradictory history could ring with more clarion urgency.