The Inferno That Destroys Democracy

I read newspapers, always have. Always one every day; oftentimes two or more.

When I was a child living in Cleveland OH, the choice was between the The Press and The Plain Dealer. My left-wing parents subscribed the The Plain Dealer. At my maternal grandparents’ home in Hingham MA, Nannie read The Boston Herald and Pop preferred The Boston Globe. Since 1989, my Dear One and I have relied on The Baltimore Sun and checked the local goings-on in The Aegis and The Record, the Harford County weeklies. While it was still being delivered, we also took The Philadelphia Inquirer; now we turn to The New York Times.

Our papers belong to a breakfast ritual of newsprint, hot tea and the Today show. We rise not long after six. We are ready to read by seven.

Disruption In My Routine

Timely delivery became an issue a few years back. The fault initially seemed to reside in the laissez-faire attitude of my driver, Shannon. After a couple years of complaints and vituperation, we were switched to Gordon’s route. What an improvement. Every now and again papers arrived just after six; they were always here before seven.

Recently—in the time of Covid and despite Gordon’s reliability—punctuality declined into late-ish delivery. It then went the way of newsboys hollering “Ex-try, ex-try, read all about it!” on street corners. On a good day we have our papers by seven-thirty; on too many days, they show up closer to eight. 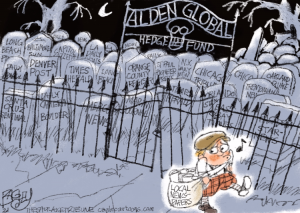 whistling past the graveyard

When my October 2021 issue of The Atlantic arrived, a bright, harsh light snapped on. My problems with my subscription to The Baltimore Sun weren’t about my driver or the person in charge of distribution in my area. It isn’t about the editors or the staff and their commitment to journalism.

My problems are with the new owner, Alden Global Capital, which has embarked on a project of slow and tortured death by evisceration.

The Value of Assets 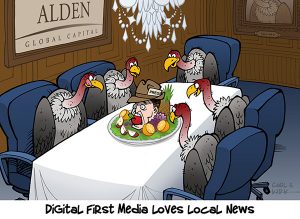 In May 2021 AGC bought the Chicago Tribune and the various papers it owned. Far from having any interest in participating in the great American institution of a free and independent press, AGC saw papers, their buildings and their equipment as assets to be sold off at a profit. Staff are a liability. They cannot be completely eliminated, however, until the organization is gutted and reduced to ash.

The Way It Used To Be

The Baltimore Sun barely qualifies as a newspaper anymore. Whole departments from education and the arts to the State House have fizzled. Bylines belong to news services. Investigative series on matters educational, political and environmental have fallen by the wayside. Monthly or weekly sections dedicated to individual counties disappeared eons ago. Moronic and irrelevant fluff provided by various syndicates fills the space once occupied by interesting features.

There is still a fair amount of sports coverage. But in Birdland, the Ravens and the Orioles, winning or losing, matter

You know what I miss? Regional content. Detailed regional content. The pieces culled from submissions by readers. There was a weekly travel piece that was way more interesting than anything Rick Steves has ever written. “My Best Shot” was a photograph with a line or two summarizing the inspiration. The Op-Ed page was rich with essays by locals, famed, infamous and unknown, addressing subjects that mattered hereabouts.

All Journalism Is Local 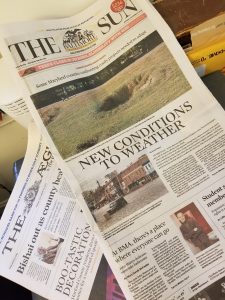 The Baltimore Sun and The Aegis

Until a fortnight past, Harford County had two weeklies, The Aegis and The Record. Peter Jay, a journalist and gentleman farmer from Churchville, edited The Record when I moved here in 1989. He was a conservative, a little Libertarian for my taste, but an excellent writer who deeply loved and respected the land and his craft.

The Aegis has always been more Bel Air-centric, a little tonier, more pages and multiple sections. Both published the items essential to small-town life: births, marriages, divorces and deaths; high school honor rolls, and college acceptances and graduations; notes about residents lives and congratulations on various anniversaries. Oh, and the police blotter. Let’s not forget the police blotter. Letters to the editor were published, mostly in full, irrespective of content or author.

Now the two publications have been merged. Local news and human interest are notably absent. PP&T, “People, Places & Things,” has shrunk from a section to a page. I couldn’t even get them to print the photograph I took of my Dear One and the handful of classmates who gathered to celebrate the 70th reunion of the Aberdeen High School Class of 1951.

The End Is Nigh 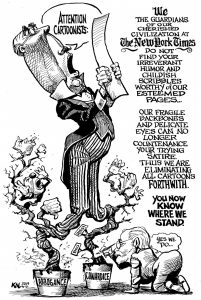 The sun has long set on the halcyon days of The Aegis & Intelligencer (1864-1923), founded as a mouthpiece of the Union cause. It’s a damned sight different paper that it was as a property of the Times Mirror Company, then owner of The Baltimore Sun, which bought it in 1986.

The staff of The Baltimore Sun once boasted the likes of the Sage of Baltimore, H.L. Mencken (1880-1956), the divine Russell Baker (1925-2019) and the splendid Gwen Ifill (1955-1026). Thank heaven, for the time being, the art of Kevin Kallaugher (KAL) grounds the Sunday editorial page. There were Pulitzers, sixteen of them, and other awards, but laurels won’t pay the bills.

Just as Agatha Christie picked off her unprotected victims until there were none, Alden Global Capital picks its debt-ridden newspapers clean and scatters the remains in the inferno that destroys democracy.