An English Wedding 3: Attar of Roses 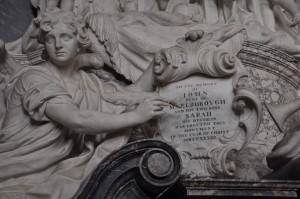 A Memorial to Love and Blenheim

Blenheim Castle is a much slicker operation than the last time I was there, and  much more costly. It would be.  I haven’t been there since 1975.

From New Cottage, Blenheim is a hop, skip and jump down Woodstock Road. My Dear One had never been; this was my third visit. Blenheim is, of course, the ancestral home of the Churchills, and the Dukes of Marlborough. Winston Churchill, a cousin, was born there and is buried nearby.

Blenheim, though, makes me think of the BBC series “The First Churchills” starring John Neville and Susan Hampshire. It aired in the fall of 1969, not long after I arrived at Princess Helena College courtesy of the English-Speaking Union. We students–certainly the sixth form, maybe some of the younger girls as well–gathered around the television on whatever night it aired and watched rapt as John Churchill and Sarah Jennings negotiated the intricacies of the English Court and fall in love and ambition. It was my introduction to the sublime Margaret Tyzack, who played Queen Anne, bosom friend and later betrayer or betrayed, depending on the version you believe.

Perhaps too much is made of Winston C. Winston is omnipresent at Blenheim. Smaller exhibitions document his birth, life, and accomplishments as a soldier and Prime Minister. Yet this was not his home, merely a place he was born and  loved dearly. Chartwell House in Kent is actually more interesting an exploration of that remarkable man. 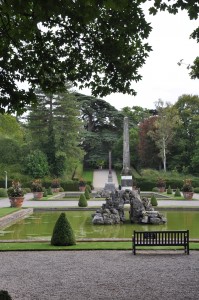 The Dukes of Marlborough were more frequently notable for their profligacy than their political acumen, intellectual accomplishments, or moral rigor. A Victorian duke, the 8th I believe, sold off a few hundred pictures and the library to pay for youthful indiscretions and inherited debts. As a modern man, a man of science, he did not see that such things were terribly useful, in any event. Fortunately the 9th duke and his successors were a bit more culturally inclined. Of course they had to marry American heiresses to rebuild the family fortunes, but then so did so many other European aristocrats of the era.

Ultimately we spent as much time strolling in the park as wandering the castle. Lancelot “Capability” Brown (1716-1783) did a heck of a job creating a landscape that seemed to come from the hand of God. Pheasants searched for grubs in the ground and a heron fished in the pool of the cataract. The air in the rose garden was pure Jean Patou Joy, each bloom offering a scent not quite like any of the others. 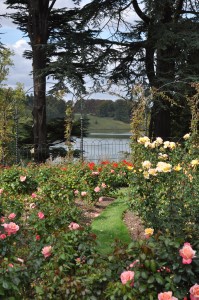