It was not that we didn’t have a plan.

Rooms at Grovefield House Hotel were booked a year ago. Everyone was up on time, bathed coffeed and nourished. The cars were loaded with wedding attire and other necessities. Only one run back in to close windows was necessary. Directions to the hotel were in every hand. The boys—Stephen and my Dear One—went off first in Stephen’s car. A few minutes later the girls—Ellen, Sami and Tali—were buckled into Baby Benz and Serena was fired up. Everyone agreed to the “no talking when approaching or in the roundabout” rule. And we were off.

All was well until we met the unspeakable traffic on the M-25. We had given ourselves three hours to drive to a hotel an hour away, get dressed and get to the church. We figured there would be no less than an hour for hair and makeup. There was, as it turned out, twenty minutes.

But we arrived at St. Mary’s and All Saints church in Beaconsfield, Buckinghamshire, before the bride and groom did and that is all that matters.

The Tower of St. Mary’s and All Saints, Beaconsfield, Buckinghamshireand that is all that matters.

It also matters, I think, that I got the opportunity to début my red velvet hat acquired during our October excursion to Cape May a year ago.  It wasn’t as stylish as I thought it might be, but no mind. Fashionable hats for English ladies in 2010 appear to be cobwebby things exploding with feather bits.

The church is modest in size and the pews were packed. Lots and lots of family and friends. We rose as the couple processed and noted that, contrary to American practice, the bridesmaids followed the bride, a girl so diminutive they could have set her on top of the wedding cake. Next to Clare’s petite person, Robert, a man of average stature, looked like a candidate for a basketball team. A most remarkable couple.

We sat a row or two back from immediate family next to a couple who were clearly expecting. Any moment I should have thought. It turned out that she was actually due that day. There was a lot of cooing over the bride’s infant nephew: “What a tiny baby.” I turned to my Dear One and said, “If we wait a few more minutes, there’ll be a much tinier baby.”

The vicar gave a rousing homily on the subject of love, its fluid identity in marriage and how it may be the ultimate defense against the buffeting of life. I hope everyone was listening. Tali’s reading of Paul’s words from 1 Corinthians (“…the greatest of these is love”) was simply charismatic and gave the vicar a fine opening. Annabel, “god-sister” as she is known to Tali and Robert, offered the poem Why Marriage? by Mari Nichols Haining. The hymns were three of my favorites and all more or less within my much reduced warbling range. 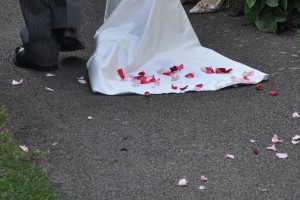 While the newlyweds, their parents and witnesses were signing the marriage registry, there was ample time for music. Two soloists and a small choir plus organist performed Schubert’s Ave Maria (soprano) and Mozart’s Laudate Dominum (mezzo). At the conclusion of the Mozart, my Dear One leaned over and whispered, “Well the mezzo was worth the price of admission.” It took me a moment to come to. Her performance had been absolutely mesmerizing.

We were welcomed to nearby Hedsor House by a “Master of Ceremonies” in scarlet cutaway. He was a delightful ringmaster, ushering us in to the reception rooms, then herding us in to what is quaintly called the “Wedding Breakfast” at 5:30 pm sharp, and subsequently announcing the toasts by father of the bride, best man and groom. Our table was all grownups. Pretty interesting folk, actually. Roger, on my left, owns a restaurant with his son and we had a most enjoyable time critiquing the meal and the flowery language of the menu.

A Scottish band—I do love men in skirts—providing a rousing ceilidh. The caller led participants through fairly complicated steps. The last dance—familiar to everyone except me of course—involved groups of three and a lovely couple, friends of Sami and Stephen, hauled me in. Fortunately he was an expert dancer and reasonably soon I was skipping in figure eights and ducking under arms with the best of them. The disco that followed included ancient music, and early Beatles and Motown still exert a certain allure. 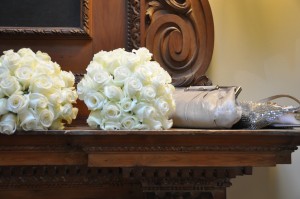 The van Stephen had sensibly hired to ferry us from hotel to church to reception and back to hotel arrived at 11:30. We stumbled up the stairs, I took only enough time for a whiddle and a face wash and collapsed.