Well we traveled from Maryland to Lithuania to learn more about my Dear One’s progenitors and all we discovered was that his maternal great-grandmother’s name was “Prana” not “Orene” (as it appeared to my eye in a scribble on a ship’s manifest). Apparent that “O” was a Cyrillic “P.” Anyway, it makes perfect sense: great-granny shows up in a U.S. record as “Frances.” Pranas always turned into Frank; Prana would have to be Frances. 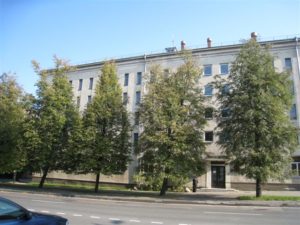 We learned that from a researcher at the National Archive of Lithuania in Vilnius, a blank and Soviet-esque building a few kilometers from the Old Town. I had come prepared with copies of my Dear One’s family tree (both ancestral and descendent formats) and the reports in which the genealogy program consolidates all the facts, notes, and miscellaneous stuff.

The fruits of my research did not impress her.

She could not, she declared, assume any of our facts were correct without copies of the original birth, marriage, death and immigration documents. Genealogy research done by amateurs such as ourselves involved “painting” of names—inaccurate guesses at what old handwriting represented—and connections that were more about fantasy and wishful thinking than history.

Forget the paternal line, we said. We don’t have certainty about the name, we can’t find anyone on a ship manifest, and we don’t have a village or parish in Lithuania, just the vague assertion that they came from some place in the Kaunas area. We will go back to bothering the folks in the Diocese of Scranton, Pennsylvania, for a search of documents from St. Joseph Lithuanian Church.

She asked did we read Lithuanian, Polish and Russian. Well no, we conceded. Then she would have to do the research for us. Each family name to be researched would cost 300 Litas; each document photocopied for our records would be an additional charge. No guarantees that there would be any results at all. And she was so busy—she indicated a deep stack of files belonging to people who got their inquiries in before we did. Don’t expect to hear anything until next year. That would be sometime in 2013, I guess.

Well, she wasn’t quite as bad as the woman at the archives in Kaunas. The Kaunas archivist just scowled at us and let loose with a lecture about how people expected to find ancestral records without knowing the correct spellings of their names, the exact place and date of birth, as well as details about their comings and goings.

Heaven deliver us from petty bureaucrats and the byzantine structures of organizations governmental and theological.

A family whose accents suggested Australia or New Zealand were seated on the bench awaiting their turn. We shared notes. They were headed to Kaunas next. “Don’t get your hopes up,” we said. “Have a great time there, it’s a lovely place, excellent restaurants, a really charming Old Town, but don’t be disappointed if the Archive receives you with all the animation and warmth of a concrete wall.”

Everyone has trouble with the family records in Lithuania. Nineteenth-century pogroms and the near-complete genocide of Jewish residents in the twentieth century left only fragments of records to posterity. For the predominantly Catholic and minority Lutheran population, it was one war, one régime change, one catastrophe after another.

We had hoped to find information in the archives, but we thought that we might learn even more from the cousins who still live in the old village of Balbieriškis near the Nemunas River. At dinner that night was my Dear One’s maternal cousin Bronė, his mother’s niece and her son and our host Rimantas (Rimas) Sidarivičius and his wife Angelė Valukonytė-Sidarivičienė. Also present were Bronė’s brother Jozuos Levinskas and their sister Stefa’s son and daughter-in-law, Vytautas (Vytas) Kiguolis and Beatrice.

What a family. Bronė, a tiny birdlike lady, reminded me so much of her namesake and aunt Bronė, my Dear One’s Mother, Bernice. Jozuos is an authentic old Lithuanian guy. He drinks like a frat boy and makes sure that all the other men do too. As a woman, I was exempt from his enthusiastic hospitality; my Dear One was not and I don’t know how he managed to last the evening, let alone get up the next morning.

It was a memorable night, a chance to embrace and hold hands after decades of letters and, more recently, emails. We exchanged gifts and looked over family trees, correcting errors and adding dates, children, grand-children and the great-grandchild or two. There were toasts and hugs and toasts and memories and toasts and discussions of gardening and toasts and feasting. Did I mention the innumerable toasts?

It was late when we left and after a final drink or two, for my Dear One probably three, we made our farewells. As we rolled north on 130 back to Kaunas, a sunset of rose and gold enameled the western sky.

the family church in Balbieriškis

A couple days later we were back in Balbieriškis to see the family church, the church Bernice had attended until she was fifteen, and to find the cemetery where the old folks lay. Holy Mary of the Rosary is a little Baroque gem, beautifully proportioned and full of light. The cemetery—once we found it—had more life in it than most modern towns.

a patchwork of gardens

Lithuanian cemeteries are wonderful. Instead of grassy swards dotted with markers in generally regular patterns, a Lithuanian cemetery is a patchwork of garden plots. Each space is large, often a rectangle six or so feet to a side. Markers can be wood, metal or stone or a combination. Many of the gravesites have low stone perimeters, like miniature walls. Inside the walls graves were planted with flowers—pansies and lily-of-the-valley, tulips and bergenia, pinks and all kinds of things I can’t identify; boxwood shrubs and ferns, too. Wild asparagus was growing everywhere. Some graves feature designs of white and black gravel; in others, clean and carefully weeded soil is raked in swirling patterns.

gardening for the dead

Throughout the cemetery people attended graves, old women, young men, mothers with toddlers in tow. In this land of people who constantly work the earth, gardening continues under the watchful eye of the dead.

In a few places, though, weeds grow where there is no longer anyone for the dead to watch over.

We walked from the sunny area where the graves are newest into the place of shade where saplings have grown large and birthdates move from the twentieth century into the nineteenth. We found many cousins there and other familiar names. People who had been neighbors in Balbieriškis were later neighbors in Scranton.

pinks in a mossy stump