On the Gulf Coast 1

We updated the the Garmin Nuvi and lost Serena. Serena’s charming English diction tended to break down with the letter “r” but that was kinda fun, you know, the “what on earth did she just say?” giggle.

With the update, the voice changed to something of slightly flattened affect, still distinctively English but something less human. The “r” problem was solved—from Garmin’s point of view—by eliminating street names almost entirely.

Now we turn and keep left and right, but with no articulation of the street name. The street name is still on the screen next to the arrow that points the direction of the upcoming change, but a key delight of hearing directions is gone. Sigh. No more Serena. Now we have Fiona.

Fiona also struggles because we managed to lose the bracket that affixes the screen to the mount. Somehow, in the process of turning off the power, setting the device in the back seat and then deciding to move it to the trunk while we visited the Ringling Museum in Sarasota, the damn thing simply disappeared. We searched the car. We searched around the car. We searched the car some more and rolled it back in order to look at the ground underneath. Nada. Zip. All gone. My Dear One, however, had strapped the screen to the mount with electrical tape bought at the grocery store where we stocked up on wine, olives and other necessities.

Ah, the John and Mable Ringling Museum–clearly a center of Roaring Twenties excess!

view from the Ca’d’Zan

I almost was persuaded that Florida would be a great place to live if I could take over the Ca’d’Zan and keep the art collection! This is a place where the certainty of turtles in the water and who knows what creatures in the banyan groves make a perfect location to nest.

The museum is much larger than I had imagined and we ran out of steam by the time we arrived at the photography galleries. I was a little disappointed in the interpretation options, you know, the label text that tells you a something about the object and the artist. David Ebitz was director of the Ringling for most of the 1990s, leaving just as Florida State University took over management in 2000. David—his 2011 death at youthful 63 shocked me—was simply one of the most gifted and inventive museum educators and college professors in the business. I thought I saw touches of this outlook still—but the stilted language on the labels, the dry art history and the hit-or-miss quality of attention reeked of the old academicism.

Yet… to have James Turrell’s Joseph’s Coat Skyscape! The installation is brand new. The website text calls it:

“a ‘gathering place’ for contemplation, sustained experience, and conversation. As you gaze up at the sky through the 24’ square aperture in the ceiling, you are invited to contemplate light, perception and experience. At sunrise and sunset, a sophisticated system of LED lights is employed to change the color of the space.  In doing so, the artist changes the context in which you view the sky and can radically change your perception of the color of the sky and its spatial relation to you.” 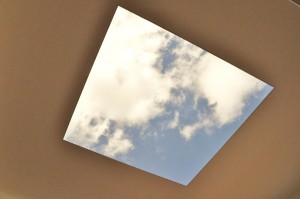 There were no LED lights at midday, of course, only the serenity of an exquisitely proportioned space and a square of blue sky, shifting clouds, and the occasional tiny passing airplane. The walls are a warm Mediterranean pink, the columns and trim white, and green vines twine toward the ceiling. We might have been in ancient Rome, or perhaps Herculaneum, in a villa far from urban noises and distractions. Benches provide comfort for private meditations, or perhaps quiet conversation of Epicurean notions of pleasure. Might Lucretius himself wander by? (That’s a reference to Stephen Greenblatt’s Swerve: How the World Became Modern, a simple marvelous book which I just finished. Read it!)

Way back whenever, 1984 or 1985 I suppose, when the “Contemporary” in Los Angeles was “Temporary” or occupying transitional housing at any rate, Jim created a skyscape open to visitors only at dusk and dawn. It was a small cube of a room with a perimeter marked by wooden benches and the same wood edging the door. I remember sitting there as the sunlight faded and a glow cast from street lamps and neon signs began to tint the sky. I had a sense of attunement, of perfect harmony in that moment. The sensation was not unlike the quiet that comes in Quaker First Day meeting—and it may be no surprise that Jim—I had the pleasure of meeting him a few times when his ex-wife was briefly director of the Des Moines Art Center—is a Quaker born.

Four years ago we froze our heinies in Miami—barely 40 degrees and sleety rain outside, air-conditioning inside. This time, record-breaking highs. It was 72 and muggy as we deplaned around eight o’clock last night and one forecast threatened 86 for that day; and 80 or above for the duration of our visit. We were hoping for a seasonal 60, maybe a luxurious 68. At 70 degrees, both of us get overheated. But the heat seems to come with a constant sea breeze and sits gently on us.

So this little January vacation bodes well for the year to come.