To experience this kind of luxury is to feel also the needling of guilt. Our cabin is made immaculate by our personal gremlin, the steward Erik, and someone hangs in a little linen bag several pages of articles from the New York Times (including the crossword puzzle) just before lunch. Organized meals—breakfast, lunch, tea, supper, evening snack—take place at intervals from 6:00 am forward. If one has a whim it seems half a dozen crew members materialize from the ether to ensure contentment.

We have been under sail since early afternoon and around five or five-thirty will return to diesel power as night falls. Among the Virgin Islands, one landmass, St. John Island, stands out: the few structures visible seem to be derelict; no roads have been cut across the hills and through the forest. St. John is, in fact, preserved parkland, a gift of the Lawrence Rockefellers. Other islands and islets mostly boast a tiny community or two on the shoreline, a few houses further up the slopes, but nothing like the development we encountered on St. Barts or Tortola.

Broken clouds hover low and sky visible through the breaks is bright blue overhead and pales to the faintest pastel at the horizon. Whitecaps are visible farther out to sea. The setting sun lights western-facing cliffs, picking out in bright gold-green what looks like meadows. We are sailing almost due west, the glare of the sun position just barely starboard, with the wind at our backs. The Captain has stepped from the bridge.   I’m hearing comments in German, Russian and Filipino—and of course in the lingua franca of the ship, English.

The lines from Baudelaire that inspired Matisse to paint his masterwork of fauvism in 1904 are in my mind: Là, tous n’est qu’ordre et beauté; Lux, calme et volupté. (There it is only order and beauty, luxury, calm and delight.) I can understand why the Huttons all but lived on the ship for a few years before their divorce in 1935.

The crew has dropped the sails and is securing them. Momentum is kept up as the engine is engaged. Plumes of black smoke billow from a low chimney and prompt the strangest thought: “Well that round of voting did not produce a new pope.” The boat stays approximately on course until the last crew member descends from the rigging. The slight arcing toward the south eventually becomes a u-turn in search of a protected anchorage convenient to our next destination, Virgin Gorda.

At the end of the day, there are coincidences and laughter. My Dear One was hopeful of an early bedtime—but something was amiss with the plumbing and a couple of crew members commandeered the room for repairs. He returned for a supper for which he had little appetite then steered the conversation in the direction of genealogy. Pam from Bonita Springs turns out to have the maiden name “Budd”; are she and I cousins of some sort?

It was time to call it a day. I was hopeful of getting a few more words down until it became apparent that the battery in the laptop was dead. Isn’t there a stash of adaptors somewhere on board? Would someone be able to help me this late in the evening?

Already in my Walmart jammies, I had no desire to change, so I wrapped myself in the lovely terrycloth robe provided by the Sea Cloud and went in search of help. Cruise Director Tom Hook understood my problem immediately and sent me to Bebot at the bar. Bebot poured me a glass of wine and disappeared down to his room. I sat with some of the ladies who were amused by my dishabille. In a very few minutes, Bebot was back with exactly the adaptor I needed. I fired up the computer. I completed these notes. 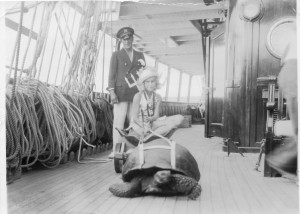