Back in the Garden

The ground is soggy, the sun is bright and the wind whips up now and then. Although there are patches of snow and ice here and there, there is no sense of winter, only the certainty of spring. 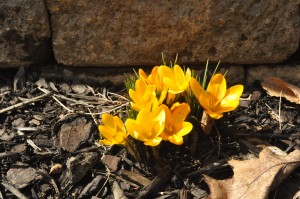 The garden is a wreck. There is so much dead foliage, not just the detritus not cleared from last fall but the destruction wreaked by this winter’s periodic storms. There were festive snowfalls before Christmas—what is not to love about that? February, however, was snow and ice and thaws, stretches of brutal cold at the edge of the polar vortex, moments of respite. March came in like a lion, but roars have been quieted by occasional sheepish smiles.

Three sallies into corners of the yard have left aches, concerns and some satisfaction. Stems and leaves seem dryer, grayer, more brittle. I pruned back the twisted branches of heather and what remains is sere. The creeping phlox that I depend on equally for a burst of color and feathery verdure in luxurious piles is spiny. Even the trees seem comatose—except for the weeping willows whose drooping twigs wave a promising gold. Hellebore seems late—the Lenten Rose seems not to know that Lent is underway—but as I nipped off damaged foliage I found robust buds in purple and blue and lemony green signaling their optimism.

No, Spring is not sprung and, compared to recent years, it appears loath to rise. Back in the garden, however, there are patches of yellow crocus, the first violet iris cristata, and the graceful milky petals of a snowdrop. A snowdrop. The only snowdrop, the survivor that I pray will thrive. Everywhere, though, the green fingertips of the daffodils reach from the earth to assure me that their sunshine abundance is on the way.

I am impatient. The equinox is five days off; the clocks sprang forward six days ago.