Thoughts on Flutterbys In The Garden

I cannot, of the life of me, get that pesky monarch to pause and pose for a picture. I have a pretty long lens on the camera and I don’t need to get very close, but still. Very irritating.

I’ve never spent much time watching butterflies. I learned to differentiate between moths and butterflies as a child. I can identify a handful of the members of Lepidoptera and I’ve seen and accepted the depredations caterpillars wreak on my gardens. This year I seem to have more and more kinds of butterflies and I want to give them names. It’s a bit like when we joined the Cornell Ornithology Feederwatch group. I hung up a feeder, got a bunch of birds and started paying attention to the diners.

common buckeye and a wasp on sweetspire

My gardening vision is less about elegant design than it is about retarding erosion and inviting wildlife. Every year I plant a few more Aesclepius tuberosa (butterfly weed) and Aesclepius incarnata (swamp milkweed) and that flighty monarch is the payoff. The Itea virginica (Virginia sweetspire) are thriving—nearly taking over—and bees of all kinds love them too. The dwarf Joe Pye weed (Eupatorium dubium) is looking awesome and attracts everything with wings. I have plenty of the other usual suspects: varieties of coneflower (Echinacea), bee balm (Monarda), and my Dear One has placed pots of petunias, heliotrope and marigolds all about. The herbs are overgrown, bolted and flowering in this withering summer heat but they attract the pollinators.

great spangled fritillary on a coneflower

My Dear One says that he is sure there are all kinds of skippers out there. He is no doubt right but it takes a while to find them, photograph them and identify them. So far my list includes five kinds of brushfoots (Brushfeet? Sounds like a name for a Hobbit.) I also have three varieties of swallowtail, two whites and sulphurs, two spread-wing skippers and one grass skipper.

silver spotted skipper on the buddleia

We humans attribute a lot to butterflies. One flapping its wings in New Mexico, it is said, can cause a storm in China. In Chaos Theory anyway. They are metaphors of frivolity, fragility but durability as well. Think of all those monarchs migrating from somewhere up north to winter digs in Mexico. It is emblematic of metamorphosis as it transforms in its cocoon from a caterpillar to a butterfly. For Christians it is a symbol of resurrection. The west wind Zephyr wears the butterfly’s wings in classical myth. In Mandarin Chinese, hu tieh, the butterfly, represents conjugal felicity and joy and yet a social butterfly epitomizes inconstancy.

Butterflies inspired Emily Dickinson (1830-1896) to poems as various as their colors and shapes. I think she was enchanted by the mystery they evoked.

Two Butterflies Went Out At Noon
by Emily Dickinson (1830-96)

Two butterflies went out at noon
And waltzed above a stream,
Then stepped straight through the firmament
And rested on a beam;
And then together bore away
Upon a shining sea,
Though never yet, in any port,
Their coming mentioned be.
If spoken by the distant bird,
If met in ether sea
By frigate or by merchantman,
Report was not to me.

Not so John Berryman (1914-1972) who apparently didn’t know one damned butterfly from another.

Dream Song 265: I don’t know one damned butterfly from another
by John Berryman

I don’t know one damned butterfly from another
my ignorance of the stars is formidable,
also of dogs & ferns
except that around my house one destroys the other
When I reckon up my real ignorance, pal,
I mumble “many returns”—

next time it will be nature & Thoreau
this time is Baudelaire if one had the skill
and even those problems O
At the mysterious urging of the body or Poe
reeled I with chance, insubordinate & a killer
O formal & elaborate I choose you

but I love too the spare, the hit-or-miss,
the mad, I sometimes can’t always tell them apart
As we fall apart, will you let me hear?
That would be good, that would be halfway to bliss
You said will you answer back? I cross my heart
& hope to die but not this year. 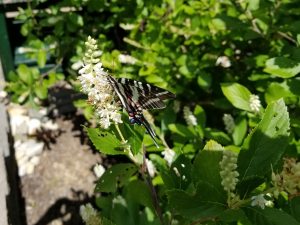 Nor do I, Mr. Berryman, know damned much about much of anything. So I sit and watch the butterflies flutter by.

red admiral and bumblebee on sweetspire