The Dallas-Austin Axis 1: A Bumpy Ride

Simply a coincidence no doubt, but at a doctor’s office we visited in Maryland this morning—just back from our week in the Lone Star State—there were several issues of Texas Monthly magazine lying about. I opened the one focused on the performance of Governor Rick Perry and had just enough time to read through “Guv Story” by Paul Burka. Mr. Burka is clearly my kind of guy. Here’s an excerpt:

Despite his long occupation of the governor’s office, Perry has few tangible accomplishments to show for his time as chief executive. Have public schools improved during his tenure? No—the funding crisis hasn’t been resolved, and no bold vision has been presented to solve the challenges and complexities of the modern classroom. Has health care been a Perry priority? No—not when 150,000 kids were removed from the Children’s Health Insurance Program after the budget crunch of 2003, and we blithely turned our backs on federal dollars for Medicaid expansion in 2013. Has transportation? No—highways have remained critically underfunded, and his most notable initiative, the Trans-Texas Corridor, blew up in his face and threatened his career. 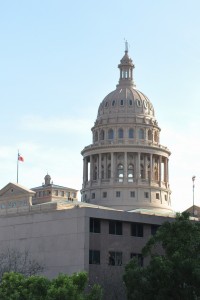 The Great Dome of Texas

But I will not digress into politics. Not right now, anyway.

The line about the highways particularly caught my eye. I have no idea how Perry or his predecessor George W. Bush can brag about the favorable business climate in Texas—or how Willie Nelson can get himself on those roads again—given the dismal condition of the infrastructure here.

Our rental, a silver Hyundai Elantra that seemed already worn out at 14,000 miles shivered down streets, bounced across corrugated pavement and shook over asphalt hillocks as I steered around orange cones and barrels and tried to dodge potholes.

“This is ridiculous,” exclaimed my Dear One. “It’s like Russia!”

And the names. What sort of name is “I-35 East” when I-35 is a north-south highway? And yes, there is also an “I-35 West.” When our GPS Fiona told us to “take the slip road to I-35 East south” it just sounded like instructions to dance with the unacknowledged spawn of Kim Kardashian and Kanye West.

Highways in the greater metropolitan areas—with their ramps and overpasses and frontage roads and u-turns—resemble visualizations of string theory and are nearly as bewildering. Traffic jams run almost continuously from early morning—say 6:00 am—to supper time. Vehicles enter, swerve across lanes, swerve back across lanes and exit. Texas drivers are real cowboys—or want to be—and steer with the awareness of posted speeds and other motorists as a 14-year-old kid bouncing the ancient family truck around the back forty.

Time for the Texas legislature to create a few jobs that will actually improve the quality of life for its residents and make things easier on its visitors. Spend some of those oil profits; put a few thousand civil engineers and laborers to work.