Museum labels—you know, those notes posted next to works of art? What’s not to dislike.

More often than not they are written in that impenetrable artspeak (of which curators and critics are so enamored) and filled with “facts” and observations the writer believes are essential to every viewer’s experience of that work.

Ironically, many curators (and most exhibition designers) believe that labels intrude on their carefully orchestrated harmonies of color and form. Rather than run the risk of a “gallery of Band-Aids” these experts will choose background colors for the labels that approximate the hue of the walls and a compatible font color that often is not legible to those of us with iffy eyesight. Don’t even get me started on museums that post labels at a height that falls between my navel and my ankles. Or use “expressive” font styles. Or ignore entirely recommendations from the Americans with Disabilities Act on font size.

Indeed, I have strong opinions about how labels should function and my first requirement is that they be both legible and address the needs of visitors.

What are questions that visitors are most likely to ask? How can a label turn the viewer back toward the work of art for another, longer, more thoughtful look? What part can the label play in reinforcing visitor confidence about looking, perceiving and engaging with art, even—and especially—if that art is unfamiliar to them?

Perhaps I should not be surprised that among this group of public, private and university museums on the Dallas-Austin axis, the most wonderful labels appeared in the two teaching museums: the Blanton Museum of Art at the University of Texas-Austin and the Meadows Museum at Southern Methodist University in Dallas. Are these labels produced with students in mind? Are they produced at least in part by students flush with excitement about discovering the artists and the power of their own eyes and responses?

Whatever. I just love great labels.

The Blanton’s collection has been shaped by philanthropy of the best kind that began in 1927: gifts of land, art, money all make this museum remarkable. And the labels certainly support the mission of serving as “a ‘cultural gateway’ between the university and the community.”

Their labels are a little hit-or-miss—but one of the coolest things in the label category is the Blanton Poetry Project (2007), a collaboration among the museum, the Department of English and poets from across Texas. Poems inspired by specific works—“Ekphrasis” is what the ancient Greeks called it, art, especially literature, inspired by art—are posted alongside the labels.

A modest number of works on display are accompanied by poems—and there are more poems in the project than presented in the gallery. 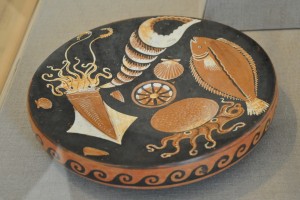 This one was taken by a piece of ancient Greek pottery.

Laying the Table
by Kurt Heinzelman

If I wanted to make you love me
I would make you seafood, Honey,
not pasta, bisque perhaps or chowder,
and I’d serve it to you in the thickest,
reddest, heaviest, fine-figured
terracotta plate I could find

for Apulians like you and I
know cuttlefish from squid
from octopus, a periwinkle
from a cockle, flounder from sole
or plaice, scallops from sand-dollars

—a plate, I mean, with a crater, a little
omphalos or enticing concavity
in the middle of it, inscribed
with signs that say dip things here.

But that was all before Darius, who worked it out long before I met you;
Darius, who isn’t “into” pasta,” who can’t tell bucatini from angel hair from al dente;
Darius, who is Greek and gay and has, I think you know, his eye on you.

Abstraction had its aficionados: 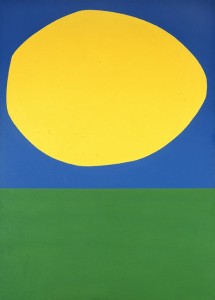 This is it. All you need. Though nothing
resembles anything you know. It’s neither
star nor flower, this imperfect oval more
like a fat yellow cigar floating in blue so dark
and bright it couldn’t be any sky that’s ever
filled your breath. And the bottom third of
the canvas: pure green. You don’t have to
do a thing. Can stop the churning of your
desire to turn this high-flying ovoid into an
ear of corn or a squashed halo. This is only
about color: yellow, blue, green. But your
mind is still recalling that the first two can
make the third. Like sun and sky make grass.
And you can’t help but keep on trying to put
names on these three shapes, but that wouldn’t
be the truth of the piece. It’s nothing to do with
names. Yet you can’t leave, because in this high
sky above this bright lawn, this widening sun
is about to drop the egg of itself into your lap.

The European collections reached out to many. 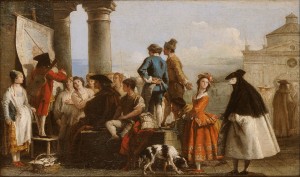 While viewing paintings over the internet
by Mike Henry

One must believe himself to be elsewhere,
fashion breath from the quiet hum of a bedside lamp,
stretch space from a library cubicle.

Shall I take a step back from the monitor? Tilt my head thoughtfully to the side as if
wishing a bird to right itself in a wind, as though the world is leaning, a dying flower
that hangs with heavy head, slowly reaching towards rest?

I make excuses for visitors to come, ask my neighbors
to return a shovel. Suppose that they’ll arrive in time to
see me, wonder what could be the matter?

There is no wind here, there are no flowers. My arms are crossed. I nod.

A boy named Giovanni Domenico Tiepolo learns to paint. He studies under his father.
His father dies. The boy draws a hundred and four sketches of a deformed clown called
Punchinello. Thousands of pictures of the clown are drawn by other people, made into
something called puppets. He becomes a clown called Punch in something called a
cartoon, which is named Punch and Judy. People watch the cartoon on something
called the internet.

Domenico breathes the musk of ink, makes many drawings, and becomes a fine
draftsman, although weaker than his father.

It says so on something called Wikipedia.

If my fourteen-month old son stands in the driver’s seat of my car
while it sits parked along the curb outside my house in the suburbs, his small
hands busy in mimic and gesture, eyes smiling into the graying afternoon,

if he squeezes the plastic circle, believes it into a sailing ship’s wheel, a frigate making
sail, the waves coaxing it to exhale from the lungs of its moors to pitch and fall towards
the dreams that he can’t yet make words to name,

then are there not oceans? Don’t we swim towards the mailbox?
In a picture of a painting, a man stands on a chair, gathers a crowd, tells them stories,
their eternal attention a graze of brushstroke. A woman in the back turns, glances over
her shoulder while the ginger dawn of her skirt brushes in the wind.

There is no wind here.
Turn mirrors to face each other.
Press refresh.

At some point My Dear One had asked how one could know where works came from before they ended up on a museum gallery wall. The provenance of a piece of art, though, is rarely offered to the public, inasmuch as the facts often fall under the heading “too much information.”

In the Meadows Museum, however, we were astonished to encounter precisely this kind of information. The writers here were fearless, undaunted by the prospect of largish sheets covered with smallish font, and explored with gusto the big double-yous of visitor curiosity:

Richard, our “gallery host,” provided an anecdote, possibly apocryphal but likely laced with truth, about the museum’s founder, Algur Meadows (1899-1978). Having been inspired to collect Spanish art by a visit to the Prado— and spending with the profligate abandon associated with big oil money—Mr. Meadows finally sought the wisdom of a scholar who also knew something about the care and maintenance of his treasures. He found such an advisor at Yale, a whippersnapper of twenty-six, who, after a perusal of the collection, offered the equivalent of “we have a problem Houston.” Apparently—and unsurprisingly—Meadows had purchased quite the heap of fakes.

Since then, however, acquisitions have been made with care, wisdom and extraordinary connoisseurship. Sharing that process with visitors invests the works with a special individuality, offering insight into the question, “What makes that object so special beyond the facts of its age and maker?”

Since 1967 several works by Picasso had been considered by the museum, but no works by the artist had yet been acquired. Finally in October 1969, this painting was bought by Mr. Meadows from Paul Rosenberg & Co. in New York. Rosenberg, who had been one of Picasso’s main dealers in America, had acquired the picture from another legend in the art world, Heinz Berggruen, dealer and friend of the artist. ..In 1989 the painting was cleaned at the Kimbell Art Museum, a process that transformed it by the removal [of] discolored varnish and overpainting that distorted its transparency. 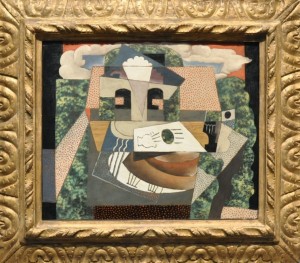 Picasso, Still Life in a Landscape, 1915

The formal and art historical analysis offered up was excellent, too, but to know that this painting had been owned by members of the Picasso’s inner circle made me think about why this painting in particular had attracted their devotion and their money. Dealers buy art for their personal collections, of course, but everything they buy is an investment in the artist, an investment in their own reputations as connoisseurs, an investment anticipating significant increase in value.

Isn’t it wonderful when great reading and great looking are in sync?