The location is still marked on Google Maps: Balbieriškio Švč. Mergelės Marijos, Holy Mary of the Rosary in Balbieriškis on Vilniaus gatvė. On maps.lt, the church is outlined, a classical basilica, a rectangular nave with a semicircular apse at one end.

Yet if you search the pictures that line the bottom of the Google map, three of the first dozen images show the ruins left after the fire in August 2013. 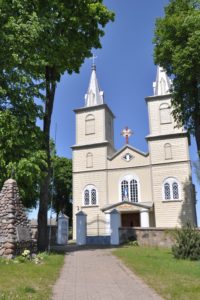 Holy Mary was a beautiful church, a wooden structure in a Baroque style, the third church constructed on that spot over the centuries. My Dear One’s mother was baptized there and received her first communion there, as did generations of her relatives and most members of the village. We stopped in twice in 2012, on a gray overcast day and on a day of brilliant sun, and I mentioned the church in passing in a post in this blog, Lietuva 8: Shaking the Family Tree.

Holy Mary on a gray day

We explored the interior back then, poking through old books and ephemera in a little room off to one side, and circled and recircled the church, bažnyčia, on the green lawn inside the stone walls. I am not Catholic, in fact a nonbeliever whatever the religion, but I fell in love with the space, the light that filled it inside, the inaudible but sensible spirits of countless worshippers, the creamy yellow of the outside, the red-painted cross.

Then quite by accident, in 2014, I was contacted by a woman whose ancestors had also come from Balbieriškis. We were talking about the village and I mentioned the church. “The church?” she said. “The church burned.” I was horrified. I know that where there is a fire there will be mobile phones, and I searched the Internet. A number of videos had been posted. One video stitched together more than nine minutes of imagery and I watched it over and over, a conflagration in the dark of night.

gates to an empty space

We already had planned our return. When my Dear One found another video that included interviews with his cousin Rimantas and the priest Father Remigius, we planned our contribution to the rebuilding fund. Rimantas could no doubt arrange a meeting for us with Father Remigius. Giving money wouldn’t change the pain in our souls, in the souls of those to whom Holy Mary of the Rosary had been important. But it was the only thing we could do.

We met Rimantas at the church. The wall and the pillars at the entrance were still there. But that was all. We parked the car, walked to the gate and entered the grounds. Scumbled dirt marked where the church had been but there was no charred remains, no residue of anything, just the good, fertile soil of the area around the Loops of the Nemunas River.

Father Remigius joined us, a young man, fit and handsome, early gray showing in his hair. He answered questions and our friend Neringa translated. The fire started in the early hours of the morning. Inspectors suspect that there was a short in the electrical wires that attach to the pipe organ in the loft. Nothing at all was left. It did not occur to me to lift my camera, to record that nothingness. 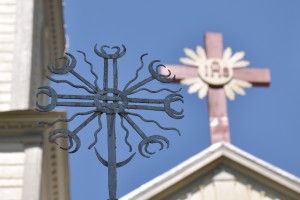 I moved a few feet away, looking at the clods of dirt and rock under my feet. A pale shape caught my eye and I picked it up, brushed away the soil. It was a piece of skull, two pieces of bone that fit together at a seam, one with an eye socket, the other curved and solid. I showed them to Father Remigius. There were many bodies that had been interred on the church grounds and under the church, he said. Shouldn’t they be reinterred? I asked, and he gently took those shards of humanity from me.

I said something about bringing in some of the archaeology students from the universities. Yes, we learned, if the decision is made to rebuild, archeologists are required by law to come in, dig, find what there is to find, before anything else is done.

Whether or not a new church ever rises on that ground I hope that the archaeologists have a chance to dig, to sieve, to rescue the remains that were meant to rest safely and invisibly until the end of time.

A temporary church has been created in the Community Center a little ways away. The Center is a handsome modern building with offices, activity rooms, and a gathering space. This is where they have set up chairs, placed an altar, and draped it in embroidered linen. It is a dignified place where all can convene and worship. Many of the old people refuse to come, though. They say it is not a church. It is not the place they know or recognize.

Their hearts, too, are left in ashes.