Šeima Means Family 5: In My Dreams

It was possibly the best day of the trip. Or maybe not best. Maybe it is the one most firmly nestled into my visual cortex, the collection of images most likely to reappear when I am asked about Lithuania, what I experienced, what I remember.

In television programs like Who Do You Think You Are? on NBC and Finding Your Roots on PBS, celebrities find themselves standing on emotional ground: land where an ancestor was once a slave, in a church or a jail cell in England that had shaped a clan’s destiny, or at a place from which whole families were deported to Nazi death camps. These are dramatic moments; from a production point of view, they are good “entertainment.” I think, however, that the feelings and the tears are not produced entirely for the camera.

Place, however, has inexplicable power. We go somewhere and we want to see something, find traces of the past, know the scene as my Pop did while an ambulance driver on the Western Front during World War I or as my Dear One’s mother Bernice did as a child in Balbieriškis, caring for the family’s cow or watching the seasons change. We dream of finding that perfect place where life might be close to perfect. 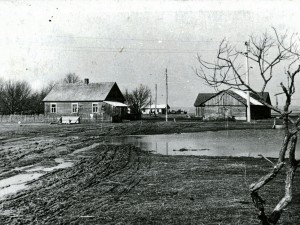 “Here we growed up, dead our father. Now that home is destroyed and moved to Kolkhoz settlement.”

We were curious about the old homestead in Balbieriškis. We had an old photograph of it but no clear idea of where it was. How far was it for Bernice to walk to church? What did she see when she watched storks poke through tilled ground and listened to cuckoos’ koo-koo? Rimantas took us there. The Soviet government long ago appropriated nearly all property to create collective farms. There is no sign that a homestead ever existed. 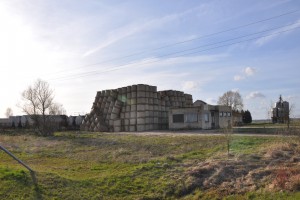 We—a group of five—had come from the cemetery where Rimantas had buried both his mother and his father during the twelve-months just past. They rest on a tranquil hillside overlooking the Peršekė River, where, as Rimantas said, they could “look at the land they had farmed.” We–just the two of us–came back the next afternoon, to bring flowers to Bronė and Motiejus, to stand by the river and try to determine which house had been theirs. Sun had muscled through the clouds although periodically it still had to elbow them aside. We placed white chrysanthemums on the graves (plus an extra, pink flower for Bronė), whispered our goodbyes. 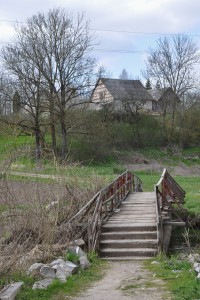 A wooden bridge across the Peršekė connects the center of the village to the cemetery. A footpath leads uphill next to a field where that day a farmer and his horse worked alongside a stork, tilling the ground.

We watched the farmer and the women working with him for a while. That sorrel mare bickered with the farmer over the job and the pair took on an aspect of an old married couple used to each other’s shortcomings. The stork ignored the back-and-forth of plow and cussedness, moving in to feast on bugs and worms exposed by the freshly turned earth. Then the mare halted near the end of one row, stretching her chestnut flanks and raising her blonde tail as a veritable Niagara of urine gushed forth. When a girl’s gotta go, a girl’s gotta go.

We walked up the hill on the other side and came out on Vilniaus gatvė, right by the statue of the Madonna and across the street from the memorial to the Partisans. We had stopped there before, in 2012. The walls and gate that marked the place the church had been were only a short distance away. An old women came out of an adjacent house, looked at us not unkindly. She said something. My Dear One and I resorted to gestures and a few words: “Bronė… cousin… cemetery,” and we pointed. She beamed. She understood. Ah Bronė! She had lived next door. This is my house. This one next door was hers. We bade farewell, shook hands, and she allowed me to kiss her cheek.

view to the south

Bronė’s house is a cream-colored cottage with a fenced garden with fruit trees and a view in the back over the Peršekė, past the cemetery to fields and forests that screened the wide waters of the Nemunas River.

A small cottage in a village in the countryside, with ample room to garden. A stream on the property where one might fish even if there were no catching. Several good-sized towns with considerable cultural offerings within thirty minutes’ drive. An airport with international flights somewhere around an hour and a half, an hour and forty-five minutes distant. A locale rich with nature, monuments, family and friends.

It was perfect, the house of our dreams. First home, second home, no matter. Had Rimantas inherited the house, we wondered?

Indeed he had, we discovered later at dinner; Neringa told us a story of extraordinary generosity while Rimantas sat by and blushed. Rimantas provides the house to a very young couple with two very young children at no cost save that they care for his father’s beloved dog and tend to the property.

Šeima means family in so many ways.