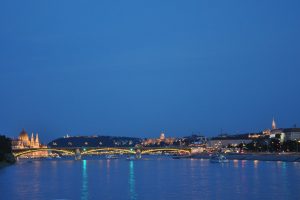 Pest, the Margaret Bridge and Buda

The evening on the Danube, buildings floodlit and bridges a-twinkle, was the cruise’s grand finale.

As Captain Igor set a course downstream, the breeze, after an unseasonably hot day, lifted spirits as well as locks of hair damp with sweat. We passed Margaret’s Island as the sun snuffed out behind low hills textured with trees. There the Alta came to a halt, swiveled through a U-turn and began a long last lap through the city of Magyars.

the local constabulary on Zrinyi utca

My Dear One and I had, in fact, seen little up close. We had, however, seen all of Buda and Pest from the walkway encircling the dome of Szent Isván Bazilika, views soft and pale in the humidity. We did not leave Pest at all, making a circle that began at our moorage, went east down Zrinyi utca, south-southeast to the Great Synagogue on Dohanyi, then west and south until we reached the Central Market. From there we curved along the river bank from the Liberty Bridge, under the Elizabeth Bridge to the Chain Bridge and our boat.

So many reasons to move at a snail’s pace. As we entered the Baroque dimness of Szent István, soaring sopranos and powerful basses, resonant strings, bright brass and winds, swelled, a fanfare for our arrival. It was rehearsal for the next night’s concert; what else to do but take a pew and listen. 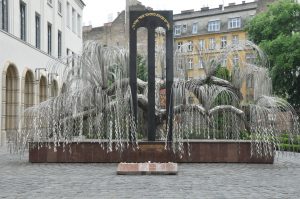 a name on every leaf

I hadn’t stopped to think that Hungary is not on the euro. Sometimes shop keepers price items in forints, euros and even pounds sterling. A few forints in the pocket, though, is a good idea. There are cambios every block or so on the main streets so I paused and swapped 25 euros for something over 7,000 forints. Hadn’t seen such large-denomination bills since I used French francs in 1970. But the cash covered a bottle of water, a couple of postcards and stamps, a few tins of paprika. 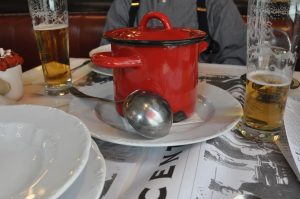 That it was a Saturday also slipped my mind. The Dohanyi Street Synagogue is a fantasy of Moorish style, all brilliantly glazed tiles and ogee arches on the outside. I pressed my face against locked gates to read names on memorials, and contemplated the Tree of Memory through the bars of a tall fence. The Tree is a weeping willow in steel and on every leaf is inscribed the name of a member of that community murdered by the Nazis.

Weariness and appetite overcame us just as we reached the Centrál Kávéház, a place recommended by my Estimable Dean for coffee and pastries. Famous and fashionable in the twenty years preceding World War I, it was the haunt of journalists, poets, intellectuals, politicians and the like. Its fortunes declined precipitously after World War II; after alternative incarnations, the establishment folded in the nineteen-seventies. It was almost lost forever, but resurrected in 2000. We ordered “ox cattle goulash soup with homemade bread for one or two,” then coffee and pastries. As I said, my Estimable Dean said I must have coffee and pastries there.

My Dear One and I did make it to the Central Market, apparently none too soon as closing time was imminent. The Market turned out to be the bright green and gold roof I had spied from the top of Szent István’s dome. The interior, an immense space under archways of cast iron, reminded me of the West Side Market in Cleveland, Ohio. I’ve heard it said that there are more Hungarians in Cleveland than any place outside Budapest. The markets share the smell of garlic and paprika, sugar syrup and too many people.

The walk back to the Atla seemed to take forever.

Or maybe it was just my subconscious saying, “the longer it takes to get back to the boat, the longer it will be before you have to leave.”