There is sculpture everywhere. Sofas, side tables and chairs in the park, children playing, bears looking confused, a marching band worth of horns, welded dinosaurs, silvery dancers, and even Frank Lloyd Wright looking approvingly at his hotel and bank downtown. Realism, abstraction, high art and humor. Who knew.

And who knew that Mason City, a town that rose at the confluence of rivers and railroad tracks and presumably had fallen there, would be a hotbed of Prairie School architecture and a cookin’ restaurant scene.

I knew that Meredith Willson’s boyhood home was there in this fictitious River City of “The Music Man.” I knew of the Charles M. MacNider Art Museum because that was where our niece, the bride-to-be, had discovered she was an artist. And I knew the MacNider had a beautiful little Arthur B. Dove painting from the 1930s and the Bil Baird puppets. But I didn’t know they had so many marvelous works, such a fine collection of modern ceramics.

…the day the music died…

All we really knew, my Dear One and I, was that Mason City was near Clear Lake where, on February 3, 1959, as Don McLean sings it, “the music died.” That was where Buddy Holly, J.P. “the Big Bopper” Richardson and Richie Valens—and a 21-year-old pilot named Roger Peterson—crashed into a cornfield. There had been a concert at the Surf Ballroom, a stop on “The Winter Dance Party Tour,” and Waylon Jennings had performed, too.

Can you imagine what an incredible rock-out that must have been?

We went into tourist mode.

Way out in the middle of nowhere, at 315th Street and Gull Avenue, we parked by the enormous black eyeglasses and walked down the lane between cornstalks easily as high as an elephant’s eye. Quiet. Blue sky. Tickling wind. A ways in, perhaps a quarter mile, is the memorial. I tried to imagine the bitter cold and snow, the wreckage, the death. I couldn’t, not in this place where black soil feeds crops and birds and critters thrive.

Frank Lloyd Wright’s 1908 Dr. George and Eleanor Stockman House has been relocated from its original site to a place that I think FLLW himself would have approved of. The Visitor’s Center next door offers an extraordinary education in Prairie School architecture, Wright, and the history of Mason City. Other modernist homes are scattered throughout the neighborhood just across Willow Creek and to the Winnebago River. Then there is Wright’s Park Inn Hotel and Bank Building downtown around the corner from the Sullivanesque Brick and Tile Building. 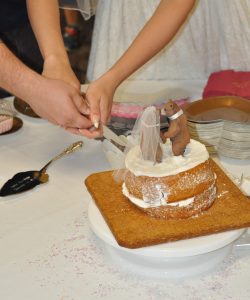 The nuptials took place at the Lime Creek Nature Center where birds wished we would move away from the feeders and autumn wildflowers bloomed. It was a homespun event in the very best sense and lunch was Iowa traditional: pulled pork, corn and jello salad. Small children ran amok, families filled the tables and the bride and groom filled the small hall with love.

But we knew they would.