WWI: City of Nature in the City of Arras 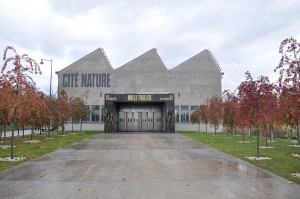 City of Nature in the City of Arras

What do you do with an old concrete building and barren land in the industrial outskirts of a gracious grande-dame of a city like Arras? Turn it into a giant and sneakily educational playground, of course! 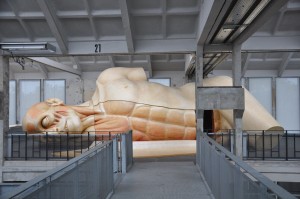 And what a playground Cité Nature is!  The conversion was designed by renowned French architect Jean Nouvel; the aesthetic is spartan and functional and the effect is mesmerizing. I suspect as well that with all that steel, Plexiglas and concrete, the place is deafening when full of kids. 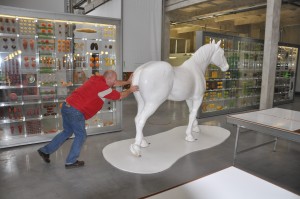 On the ground level, permanent displays explore the history of agriculture, the science of nutrition, and challenges of the environment. Huge transparent panels showcase fruits, vegetables, bugs, flowers, all manner of living things as patterns of color and texture. Computer stations and copiously illustrated didactic panels offer sequential lessons on particular topics—the production and uses of sugar, for instance, or medicinal and commercial uses of herbs and flowers, or the comparative implications of biofuels and petroleum for air pollution—and Q&A’s let me test my French vocabulary and all visitors test their understanding of the information conveyed. Two answers are offered for each question; buttons generate a green light for right and a red light for wrong. I guessed right that lavender is more common in men’s fragrances than in women’s, that diesel is cleaner than ethanol, and wrong on a whole bunch of stuff. 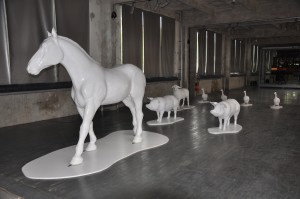 I needed at least fifteen minutes to assemble a puzzle identifying the parts of a cow from a charcuterie’s point of view. My Dear One and I had just been speculating on the precise location of the entrecote—the butcher at our Carréfour had, the day before, sliced a couple of steaks from a magnificent whole entrecote—and there were a number of other parts with which we were unfamiliar. My Dear One was right: the entrecote comes from the area of ribs behind the shoulder and in front of the loin. 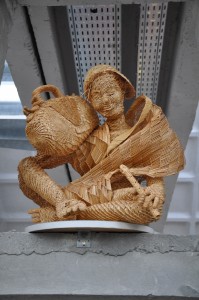 The upper level was dedicated to changing exhibitions, this one called Mille Pailles, “A Thousand Straws.” The straws in question ranged from the familiar bales to stems of rice and other cereals. They were snipped small and used in marquetry inlays; hats old and modern demonstrated inexhaustible invention and imagination.

The plantings we could see from the windows called to us, though, and time was short. 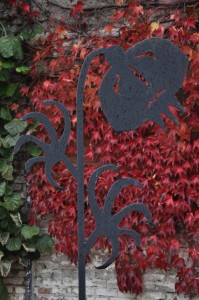 a flower of ambiguous expression

The gardens were laid out as pure geometric abstraction, shapes that might delight bird and pedestrian alike. Crimson vines clung to a long wall at the back, a theatrical curtain behind black steel sculptures of anthropomorphized flowers.

In the far corner of the gardens, a donkey and a miniature horse grazed contentedly while three white geese honked towards us, a surging, white-feathered line of defense. A worker shouted a warning to be careful, that they bite. Not to worry. I take hostile geese seriously. I stood a few inches outside the entrance to the animal area, just far enough outside their territory for safety. The alert goose-gaze kept donkey and horse safe from us; distance kept us safe from geese.

Roses still bloomed, the damp air heavy with the sweetness of one yellow cluster. Dahlias, those stalwarts of late autumn, collected raindrops on their petals. Delphinium struggled to hold cobalt spikes upright; pink and purple cosmos waved in the wind. Grapevines were pruned and staked, and majestic leeks awaited harvest. We followed this path then that one and wished there were no reason to leave.