Guns and Mental Health: Just Who Is Crazy?

On Valentine’s Day 2018, Nikolas Cruz packed up the AR-15 type rifle he bought just after his eighteenth birthday, and countless rounds of ammunition loaded into large capacity magazines, into a carrying case. He called an Uber and headed over to Marjorie Stoneman Douglas High School in Parkland, Florida (a town recently voted “safest” in Florida) where he had been a student. He killed fourteen children and three teachers before escaping into the terrified crowd of youngsters flooding out of the building. 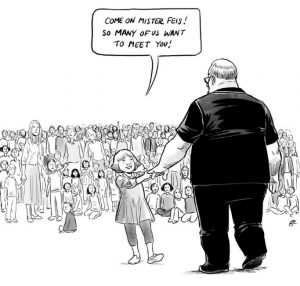 Cruz is nineteen years old and was expelled from Stoneman Douglas for deeply troubling and violent behavior. Neighbors had repeatedly called the police to his home. A YouTube subscriber had contacted the FBI when someone named “Nikolas Cruz” posted “I’m going to be a professional school shooter.” On January 5th, someone regarded as “close to Cruz” called the FBI again, describing Cruz’s “gun ownership, desire to kill people, erratic behavior, and disturbing social media posts, as well as the potential of him conducting a school shooting.”

As we consider those seventeen bodies, the fifteen wounded by gunfire and the countless devastated emotionally and psychologically by the attack, is the proper conversation about mental health?

Perhaps we should redefine “anger” as a mental illness and list it in the next edition of Diagnostic and Statistical Manual of Mental Disorders. Perhaps we should list “toxic masculinity” as a threat to national security.

School shootings were not unknown in the past. They have become more frequent and more deadly with the rise in gun ownership and the ready availability of semiautomatic and automatic weapons.

In 1976, 37-year-old Cal State-Fullerton custodian Edward Charles Alloway bought a semiautomatic rifle at a Kmart, killed 7 and wounded 2 in the campus library. He turned himself in and today is still held at Patton State Hospital in San Bernadino, California. He had harmed a coworker at a different job; he had been hospitalized for suicide attempts; he had been treated with aggressive electro-shock therapy. None of that interfered with his owning a firearm.

Patrick Edward Purdy, 25, killed 5 schoolchildren and wounded 32 others playing outside the Cleveland School in Stockton, California, then turned the gun on himself. He was a drifter with a well-documented history of trouble. He was interested in Aryan ideology and expressed hatred toward immigrants, believing that they took jobs for “native-born” Americans. His victims were predominantly Southeast Asian refugees. He had no trouble buying a Chinese-made AK-47 at the Sandy Trading Post in Oregon.

28-year-old Gang Lu was outraged that his dissertation did not receive the prestigious D.C. Spriestersbach Prize at the University of Iowa in 1991. He killed 4 faculty members and a student, and wounded another student, before killing himself. 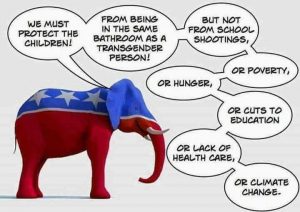 It’s the elephant in the middle of the room.

Middle school students in Craighead County, Arkansas, Mitchell Scott Johns, age 14, and Andrew Douglas Golden, age 12, fatally shot 4 children and a teacher, and wounded 10. They were arrested fleeing the scene, charged as juveniles and imprisoned until they turned 21. Both individuals have had gun-related legal problems since their release. Neither family situation was perfect, but both were stable and comfortable. In school the boys were known bullies, violent and profane. Andrew was given his first gun at age 5 by his grandfather, a wildlife conservation officer.

Eric Harris and Dylan Klebold, students at Columbine High School, were angry at classmates who bullied and abused them and faculty who did not protect them in 1999. They left a trail of 13 bodies; 21 others were wounded by gunfire; the emotional damage is too profound to assess.

In 2007, Seung-Hui Cho, a senior at Virginia Tech in Blacksburg, set new records for mayhem, killing 32 and wounding 17. Cho had been diagnosed with a severe anxiety disorder, for which he received years of therapy, but federal privacy laws prohibited Virginal Tech from being informed about his past and his needs. While at college, Cho was deemed mentally ill and ordered into treatment, but because he was not institutionalized, he was able to purchase handguns despite undergoing the National Instant Criminal Background Check System.

The Sandy Hook Elementary School shooting in 2012 brought a new level of horror to this litany. Adam Lanza, a twenty-year-old was retroactively diagnosed with Asperger’s syndrome, depression, anxiety and obsessive-compulsive disorder. That happened once he shot and killed his mother, 20 children between the ages of 6 and 7, and 6 adult staff members. His mother was highly protective. She bought him guns (including automatic weapons) and took him to shooting ranges. He too committed suicide afterwards. Lots of thoughts and prayers poured out but American politicians and the National Rifle Association rallied against any efforts to strengthen gun controls. 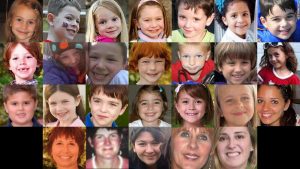 Chris Harper-Mercer, 26, killed 9 people and injured 8 others at Umpqua Community College in Oregon, in 2015. A Glock 19 and Taurus PT 24/7 were his weapons of choice. He also owned an automatic rifle. The details of the murders express an unimaginable level of sadism; his victims were his teacher and classmates in an introductory composition class. His background was troubled. He had learning disabilities. He had joined the army in 2008 but booted after five weeks for failing to meet the “minimum administrative standards” of basic training. His mother, like Mrs. Lanza, was protective. She claimed they both had Asperger’s syndrome. There were 14 legally purchased weapons in the apartment and she later stated online that she always kept full magazines in Glock pistols and an AR-15 inside the home. They also spent time together at shooting ranges. Harper-Mercer had a lot of anger. He was failing school. He was sexually frustrated and unhappy to still be a virgin. He was filled with animosity toward black men. He studied the actions and details of mass shootings, including the one at Sandy Hook Elementary. He wanted to be a “man who was known by no one, is now known by everyone. His face splashed across every screen, his name across the lips of every person on the planet, all in the course of one day.”

And then came Parkland on Valentine’s Day 2018. Seventeen—14 students and 3 teachers—are dead and 15 more were sent to the hospital.

The above list is incomplete. It is also only a list of school shootings. There are also the massacres in mixed use public places. 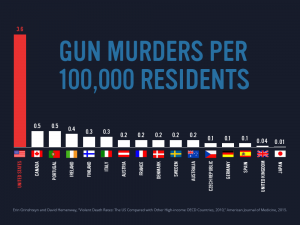 2017: 58 dead and hundreds shot and injured in the shooting by Stephen Paddock at the Route 91 Festival in Las Vegas, Nevada. The shooter committed suicide.

2017: Devin Patrick Kelley walked into the First Baptist Church in Sutherland Springs, Texas, killed 26 worshippers, including young children, and injured 20. He was shot and wounded by a civilian as he fled and was found dead from a self-inflicted head shot in his crash SUV.

2016: 49 killed and 58 wounded in Orlando, Florida, by Omar Mateen at the Pulse nightclub. Mateen was killed by the police after prolonged negotiations during which he killed more victims.

2015: a terrorist attack by Syed Rizwan Farook and his wife Tashfeen Malik took the lives of 14 people and injured 22 during a public health training even and Christmas party. They used a friend to purchase the arms.

2015: Dylan Roof, 21, an avowed white supremacist, gunned down the minister and 8 parishioners at the historic Emmanuel African Methodist Episcopal Church in Charleston, South Carolina. It was his intention to start a race war. He has been sentenced to death and also life without parole.

2013: Aaron Alexis, 34, fatally shot 12 and injured three in the headquarters of the Naval Sea Systems Command inside the Washington Shipyard. Alexis was killed by police.

2012: James Eagan Holms set off tear gas grenades and shot into the audience at the Century 16 movie theater in Aurora, Colorado. Twelve were killed and 70 were injured. Prior to the shooting, Holmes rigged his apartment with explosives. He was sentenced to life in prison, no possibility of parole. That’s a total of 12 life sentences plus 3,318 years for attempted murders and the explosives in his apartment. 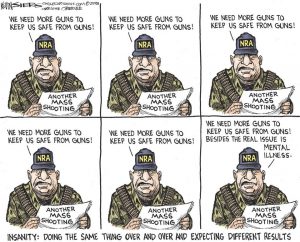 Insanity: Doing the same thing over and over and expecting different results.

There is no question that all of these perpetrators—and of the ones I mentioned only one was female—were of questionable mental stability. The assailants at San Bernardino were the most rational in their ideation although that organization was driven by terrorist convictions.

“Crazy people” as the spokesperson for the NRA, Dana Loesch, likes to say, should not be allowed to own guns. Yet the NRA has stymied all legislation that should deny a gun to anyone for any reason whatsoever. The NRA as assertively and successfully opposed legislation that would enhance background checks and close loopholes that allow purchases without background checks.

Human error was as central to these tragedies and inhumane attitudes as legislation that puts guns in dangerous hands. Tips were not followed up. Databases were not updated. There were many basic failures to communicate. In Parkland, concerns expressed to the FBI did not filter down to the appropriate individuals; evaluations made by government social services determined that Nikolas Cruz was in a safe environment and receiving the services he needed. His foster parents knew he was troubled, knew he owned guns, including an automatic weapon, and felt the matter was nothing about which they should be concerned.

In the case of Stephen Paddock, well, no one who knew him thought he was dangerous. They all thought he was a good guy, a successful businessman. No gun seller thought anything of the quantity of arms and ammunition he was buying, nor did the federal gun registry suspect that someone buying dozens of semiautomatic rifles in a twelve-month span augured anything of concern.