Down to New England 3: Jerry and Doffy

When last I saw him, the  blue and lavender and green plaid cotton shirt Jerry was wearing made his bleached-denim eyes bright. The reason to travel to Damariscotta, Maine, was to have more time with Jerry before he loses his way in Time, to have dinner with Doffy and make sure that she is not herself lost in the sometimes overwhelming world that must need center on Jerry’s comfort. 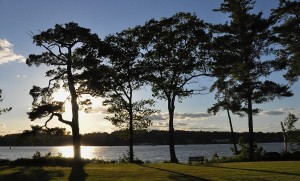 Jerry and Doffy (more formally Jerome and Dorothy) have been married for almost sixty-one years. Their sons and daughters-in-law and grandchildren feted them last October third, before Jerry fractured his back, before the little strokes made his words halting, his thoughts unpredictable in their appearance.

These two seemed always to demonstrate the attraction of opposites. He is the careful, conservative lawyer, analytical and methodical in his thinking and deliberate in his speech, dispassionate in his affect. She is the emotional artist, constantly distracted by the glowing of a color, the enthusiasms shared by a youngster, sentimental, emotional and fierce in her love. Jerry modeled the sober life of a businessman; Doffy ran the “Magic School” for her boys and a neighbor child, Oliver. Those boys grew up to become prominent writer/novelists and a medical doctor, and an art historian/museum curator. 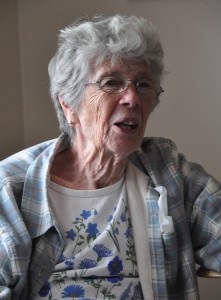 I have many reasons to cherish them. Jerry shepherded our legal and financial lives after my father’s death in 1964 and long after my mother’s release from a mental institution. Doffy distracted me , loved me, put the gleam of silver into the lining of the storm clouds that seemed constantly to threaten my skies. Jerry could be relied on for an objective discussion of potentially volatile subject matter. Doffy infused into everything the passion that makes life rich.

My Dear One suggested that we take a northerly detour en route to the bicentennial celebration of the Church on Rabbit Hill, the congregation founded by my ancestors. I mapped out the routes, calculated driving time. We planned a visit and dinner on Thursday, a second visit on Friday, and so it all worked out.

Our arrival was complicated by typical confusions and miscommunications. We agreed to meet Doffy at the apartment but were misled by their names on a door that went into her studio. Not finding her and the apartment around the corner, we left our grocery-store flowers in a vase and made our way to the nearby assisted-living facility. Jerry was dapper in checkered shirt and scarlet bow tie; he has always been partial to bow ties and I can’t actually conjure up an image of him wearing a long cravat. I had been warned that he might not recognize me; recently he had fretted that he had not called his parents in days, parents who had moved on to the next realm in the 1990s. I would not have been surprised had he mistaken me for my mother; I resemble her more strongly with each day. But he grinned, face aglow, held out his arms and welcomed me with an affection that as I write this brings me to tears.

Doffy soon arrived and I gave Jerry a copy of the cd-rom I made for my mother’s (his sister’s) memorial in 2007, a collection of songs that she had loved or that I thought she would have loved or that for various reasons reminded me of her. Presently Doffy, My Dear One and I left for supper, feeling guilty at abandoning Jerry to his supper on a tray but needing that moment, needing the more serious conversation that came later.

The next afternoon we were back. We played the disc, listening to Cat Steven’s Morning is Broken, Paul Simon’s Kodachrome, Mary Hopkins’ Those Were the Days, Edith Piaf’s La Vie en Rose, and Charles Trenet’s La Mer. Jerry is a devotee of the classical—one of his consuming involvements was the Handel and Hayden Society—but I could see him nodding, listening, enjoying.

We sat in golden light, in the glow of bright memories, in the warmth of intertwined lives. When that evening’s dinner tray arrived, we made our farewells.