What is it with making ordinary treats seasonal? 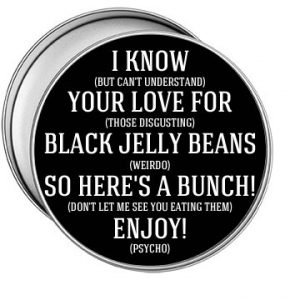 I already went cuckoo when I nearly couldn’t find peppermint stick ice cream for my Christmas dinner menu—and I don’t see why the flavor should be available only from late November to late December. When I was a child and subject to terrible carsickness—okay, I’m an adult and still subject to terrible carsickness—my folks would stop at a Howard Johnson’s (or most any ice cream place) and I would get a cone. That creamy, sweet peppermintness sat so lightly on the queasy tummy and delectably on the tongue. At Brigham’s, a favorite stop, a hot-fudge sundae on peppermint stick ice cream was a classic until my palette turned to the crisp and tart bubbles of a raspberry-lime rickey.

As the raven quothed, however, “Nevermore.” 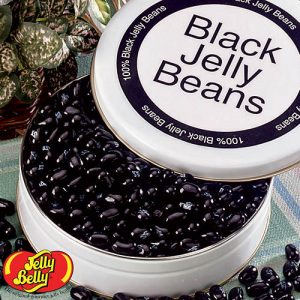 Jelly Bellys in a container

My Dear One loves black jelly beans but they have become harder and harder to find. Bomboy’s Candies has little bags of jelly beans nearly year-round but offers licorice only in the Easter season, which fortunately begins immediately after Valentine’s Day. Wegman’s offers black Jelly Belly beans most of the time alongside a host of other flavors, but those are very expensive candy and my beloved connoisseur finds their flavor lacking. Walgreen’s and CVS used to stock them but don’t anymore. In fact, I didn’t even see black jelly beans at my local stores this Easter.

It isn’t just licorice he yearns for. If the flavor were all that mattered some other form of candy would do. No. My Dear One loves black jelly beans.

Today is April 7, 2017, and Easter Sunday was six days ago. I checked my ShopRite, the Walgreen’s and Target and none of them had black jelly beans. For that matter, none of them had jelly beans. Apparently Jelly Belly has cornered the market on that confection for eleven months of the year. 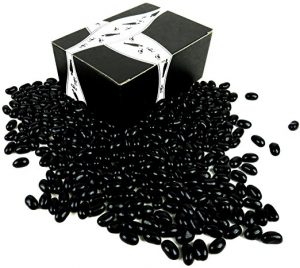 I gave up on stores and went online where I found quite a few manufacturers of black jelly beans. I also read through the ratings—I figure people going to extremes to get them  are likely to have opinions on how this brand or that brand tastes. They do and they ennunciate those opinions enthusiastically.

I bought Gourmet Black Licorice Jelly Beans by Cuckoo Luckoo Confections. They’re expensive but nothing is too good for my Dear One. Hope he likes them.