Books # 16 & 17 in 2018: Memoirs by Daughters Who Survived—Tara Westover and Jeanette Walls

Violence, incest, abuse of every stripe: such horrors fill both narratives by these relatively young writers. In the words too are moving reflections on salvation: the selfless love and sacrifice of siblings, the insight and enduring patience of peers and educators; serendipity and luck. Then there is hope, the force that did not escape Pandora’s box, according to the ancients. That “hope” also means “foreboding” fills both memoirs with tense uncertainty. While one could associate the books with Horatio-Alger-type stories of a child facing innumerable disadvantages and immense hurdles and triumphing through grit and determination, there is no such moral to be found in them.

Tara Westover’s Educated: A Memoir (Random House, 2018) is a meditation on fact and belief, on understanding built on empirical experience and beliefs instilled through propaganda and fear. As a child growing up in a sectarian Mormon family, her reality was a shaky construct of “truths” pronounced by her father and buttressed by her mother. The youngest of seven children, she does not know with certainty her date of birth; nor do her parents. Her homeschooling made enabled her to read and perform arithmetical tasks. Her father worked construction and dealt in scrap metal; her mother, a midwife and herbalist, moved from what might be regarded as mainstream holistic healing to magical thinking. Four of her brothers loved her, protected her and encouraged her first to attend school, then to apply to college and ultimately to wrest control of her life. Her fourth brother, Shawn, tortured her, assaulting her in ways that reeked of psycho-sexual sadism. 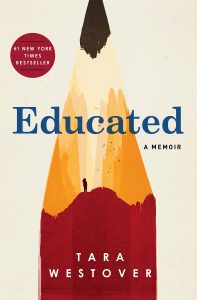 Westover’s future begins at Brigham Young University where she encounters the unimaginable extent of her ignorance. Blessed with extraordinary professors and classmates of inordinate kindness, she discovers her intelligence, her curiosity, her possibilities. An undergraduate summer program at Cambridge University in England leads to graduate school there and a fellowship at Harvard University. Lest this arc seem too easy, too much the stuff of fiction, we see that the journey is sabotaged by her parents, some siblings, and her own conviction of worthlessness, her belief that all punishments received are earned and deserved.

The chapters that take us from Tara, aged about seven to the accomplished writer and adult she is now are offered in a distanced tone. The conclusion—absolute estrangement from her parents and several of her siblings—seems inexorable. The reader breathes a sigh of relief that her brothers Tyler, Richard and Tony, their wives and her paternal aunts Debbie and Angie, tighten their bonds with her. Moreover, as the writer reminds the reader in footnotes and “A Note on the Text,” a memoir is a work of memory and memory itself is an unreliable witness. She has presented truth as best as she can, like the good scholar she is, doing extensive research, calling on the most authoritative primary sources, yet knowing that misapprehensions, misunderstandings and subjectivity have all shaped the outcome. And an education should be the means for achieving that.

A film based on The Glass Castle: A Memoir by Jeannette Walls (Simon & Schuster, 2005) was released in 2017 and I cannot imagine wanting to see it.

Walls’ family, like Westover’s, lives in a reality of the parents’ making. She is the second of four surviving children, three girls and a boy. Rex Walls grew up in West Virginia, Rose Mary Walls in Arizona. Rex was an intellectually gifted man with a grifter’s heart. Doing a “skedaddle,” escaping in the dark of night was a regular feature of their lives. Foraging for food in trash bins was also part of that life. 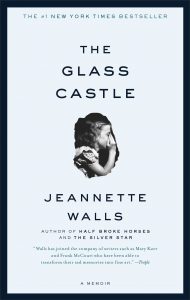 There is great affection in this family—parents to children and children to parents. And so much narcissism. Rex is perennially lost in his fantasies of deals and triumph and no action is taken in which the needs of comforts of the children matter. Rose Mary, an artist and writer, has a constant refrain about it being “her time.” Describing their style of “laissez-faire” would be an understatement, as well. Jeanette’s earliest memory is herself at age three, standing on a chair cooking hot dogs at the stove. Her dress catches fire. She spends six weeks in a hospital. During one visit, brother Brian’s head is wrapped in a bloodstained bandage. He had fallen and cracked his head open on the floor—but, Rex and Rose Mary agree, “one kid in the hospital at a time is enough” and they skedaddle before bills are presented or Child Services is summoned.

The family moves around Arizona and California and ends up in West Virginia. Rex, an alcoholic with a four-pack-a-day cigarette habit also has a gambling problem. He rarely has a job and jobs rarely last more than a short while. Rose Mary, a college graduate with a teaching credential, mostly refuses to work as she expects to make a living at her art. Rex steals money the four children earn at an array of jobs, planning to support the eldest, Lori, in moving to New York City. Lori does eventually make it to New York; Jeanette follows immediately on graduation from high school; Brian is next; then the three bring twelve-year-old Maureen up and enroll her in a good public school in Manhattan. Perhaps it is no surprise that Rex and Mary Ann migrate there as well—ending up living on the street and then squatting in a derelict building. Despite—or because of—the family values modeled by their parents, these siblings, certainly the three older ones, demonstrate immense work ethic, responsibility for themselves and each other, and a love for their parents that is both inexplicable and marvelous.

Walls’ story ends on a happier note than Westover’s. Lori, Jeannette and Brian all move forward in their chosen fields. They marry, sometimes more than once and have children; they are happy. Maureen seems the one to have sustained real and permanent damage. Rex dies, perhaps from tuberculosis and certainly from a lifetime of smoking and drinking. As the story comes to a close, however, Rose Mary makes a permanent home in that derelict apartment that the City sells to the squatters for one dollar per unit.

I had not intended to read these books sequentially. I had not intended to read them at all but while on vacation had to fall back on uploading material to my tablet. I had vague recollections that both memoirs had enjoyed some critical success. Each resonated with the other, however, offering comparisons, contrasts and evidence of the ability of children to survive and thrive, as long as there is hope and as long as luck, at least in retrospect, gets them what they most desperately need.