Books # 24 and 25 in 2018: “Renoir’s Dancer” by Catherine Hewitt and “Picasso and the Painting that Shocked the World” by Miles J. Unger

I have been reading a lot of books that focus on art and Paris from the 1890s into the first decades of the 20th century and these two followed one on the other. What is truly fascinating after a sequence that included Corbett’s Rainer Maria Rilke and Auguste Rodin, McAuliffe’s Twilight of the Belle-Époque and Ross King’s Claude Monet and the Painting of Waterlilies, is the very different lenses trained on figures who make an appearance in all the books. As I prepare to teach a seminar on Cubism this fall, I wonder how I might be able to open that story up, populate more fully the world in which Cubism emerged and the communities to which artists like Pablo Picasso, Georges Braque and critics and other practitioners of the new style belonged. 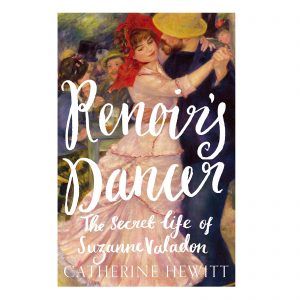 Renoir’s Dancer: The Secret life of Suzanne Valadon by Catherine Hewitt (St. Martin’s Press, 2017) starts with a perfectly awful title. Two things. First, the title suggests that Renoir’s role in the book is much, much greater than it is. Second, and much worse, it implies that Suzanne Valadon (1865-1938) somehow shielded the facts of her life. In reading the book, one discovers that Valadon was anything by humble, shy of the spotlight, retiring in any sense of the word. The book, however, does improve and Hewitt has done an admirable job in collecting the facts about this unjustly overlooked painter and weaving them into a cinematic narrative.

I found her attention to details of place and character admirable. I found her tendency to play loose with dates irritating. Dates, particularly when constructing a biography are hugely important because the sequence in which events occurred, works of art were created and so on is key. I persistently had the feeling that I had lost track of chronology and kept reviewing text and sometimes fact-checking things on the computer. (I am an art historian and I do care about these things.) Finally, while I want every biographer to feel passionate about their subject, I look for an awareness of alternative narratives, other explanations. In the end, Hewitt complains a lot that Valadon was overlooked both in the 1880s and 1890s but then overshadowed commercially by her artist-son, Maurice Utrillo (1883-1955). I did, however, find the detailed chronology of Utrillo’s alcoholism and institutionalizations interesting and useful.

Beyond citing sexism and her ongoing identity as an artist’s model, the author simply doesn’t offer any real analysis of why Valadon’s work received so little attention and why it was deemed not sufficiently commercial. Bear in mind that Valadon, essentially painter working in realist mode with symbolist overtones, emerged as an artist in the first years of the 20th century when brilliant Fauve and Cubist abstraction occupied the modernist critics and collectors and ruled in her neighborhood of Montmartre. (Picasso, for instance, moved into his apartment in the Bateau Lavoir studios on the Place Ravignan in 1905, then into an apartment on the Boulevard Clichy at the base of the Butte in late 1909 before decamping across the Seine to Montparnasse in the fall of 1912.

Picasso and the Painting That Shocked the World by Miles J. Unger (Simon & Schuster, 2018) is a solid addition to long, long, long bibliography already in place. I have read all three volumes of the biography by John Richardson and a hefty number of exhibition catalogs and articles. In fact, when I started organizing the Cubism course, I was startled to realize just how much stuff is already on my own bookshelves. In some ways, Unger’s exploration of Picasso youth and formative years is better than Richardson’s—perhaps because Unger isn’t speaking from the Mount Olympus of Picasso studies and goes to a great deal of trouble to detail the experiences that he will later use as evidence for his analyses of Picasso’s art.

Picasso and the Painting that Shocked the World

At one point my husband pointed out I was deeply into the book and still had not arrived at the Demoiselles. I wasn’t surprised. I knew the Demoiselles had to provide the climax to the arc; my only question was how the author would bring the story to a close. He did that effectively by situating the Demoiselles d’Avignon (1907) as the beginning of the seismic shift that changed Picasso from a symbolist painter of dark, personal and angst-laden narratives to a revolutionary who abandons message in favor of pure expressive form.

On the other hand, I find Unger, like many authors writing for the popular nonfiction market to be unreliable on facts. Another reader pointed out that Unger gives Georges Braque’s birth year as 1892 instead of 1882. Yes it could be a typo, but it is an inexcusable one. I made a number of notes when I ran into his assertion on page 222 that “[Matisse’s] Luxe, Calme et Volupté, completed in 1904 and exhibited at the Salon des Indépendants in 1905, a vision of a sensual paradise based on a poem by Stéphane Mallarmé, features Neo-Impressionism’s distinctive dots of pure color.”

Well no. Luxe was emphatically not based on a poem by Stéphane Mallarmé. It was based on the poem “L’Invitation au voyage” (Invitation to the voyage”) from the collection Les Fleurs du Mal (“Flowers of Evil”) by Charles Baudelaire. The relevant lines that I always share with my students are:

There it is only  order and beauty,

This is not an inconsequential slip, a typo. Unger goes on to embed the error a few pages later while discussing the magisterial Bonheur de vie (1905-06) now in the Barnes Foundation collection.

Mistakes like this bother me. I like to recommend readable books to my students, hoping that they will find such texts a pleasure rather than the burden they find most of things I assign. I don’t, however, want my students learning things that are incorrect and casual readers, readers not familiar with content in a more scholarly way, are not in all likelihood going to recognize errors when they encounter them.

Generally Unger has excellent insights. What he has to say about works including the juvenilia, the Blue and Rose Periods and the transition to Cubism is interesting and thought-provoking. He also has a real knack for description. Unger is, however, “judgy.” He dismisses the conclusions of various scholars, he makes assertions about what an artist thinks or intends, and when I look for citations that uphold his opinions either there are non or the sources are the words of the many not entirely reliable witnesses, many of them former partners, who subsequently wrote memoires. And, while the painter Françoise Gilot Salk (b. 1921), who lives in San Diego, California, still recalls well her “life with Picasso,” and her eponymous memoir has been mined repeatedly for films and other books, no single recollection, no single point of view ever tells a complete story.