We were in the car—mostly the only time I listen to the game shows on National Public Radio—and Ask Me Another with Ophira Eisenberg came on, broadcast from Orlando, Florida. This and that bit went by and a new contest started. The object of the game was to identify whether a particular quotation was from Pitbull, Mark Twain or a nursery rhyme. (Nursery rhymes are not the strong suite for either contestant, by the way.) 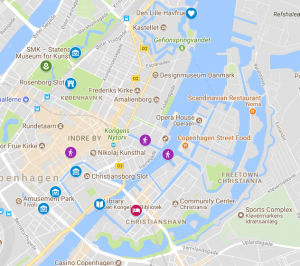 My Map of Copenhagen

Marc Ispass was player number two. Apparently, he is a transportation and urban planner. When asked by Eisenberg about his vision for Orlando he said, “I would love to have a place where everyone can ride their bike and take the train everywhere.”

Eisenberg confirmed that her guest was a big fan of bike lanes. When she asked about pedestrians he responded, “They could share the bike lanes,” which was a little obnoxious in my opinion. 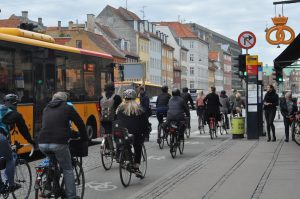 Not in Copenhagen they can’t. (Or in Amsterdam. Or on the Brooklyn Bridge.) In Copenhagen motor vehicles have streets, bikes have lanes and pedestrians have sidewalks. The system works well; all three groups seem to follow traffic laws consistently and to the letter.

From about 1970, Copenhagen has reduced the number of parking spaces in the city incrementally each year. Residents and visitors were gently forced onto bicycles, public transportation and their feet. Today, even at the height of rush hour, there are relatively few cars, traffic jams are uncommon, and urban roar hits far fewer decibels than one might expect. I noticed some noise on main thoroughfares like Torvegade, Hans Christian Andersens Boulevard and Vesterbrogade, but compared to most cities I know, not much. 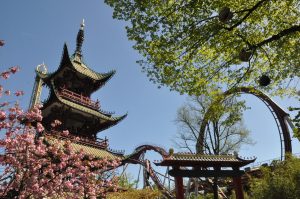 When I was looking for a place to stay, I opened Google Maps and timed the walk from any given location various tourist attractions. At 1.7 kilometers I start to think about the need for public transportation. That’s just about a mile. Wildersgade, 15, put us 1.8 km (1.1 miles) from Tivoli Gardens; 2.1 km (1.3 miles) from the National Museum of Art; and 2.9 km (1.8 miles) from the Little Mermaid. The area contained by these points pretty much covers the Old City of Copenhagen. And then some.

Enter the Red Bus Hop-On-Hop-Off option. I had anguished over that. Should we, shouldn’t we pay for something I wasn’t sure we would use. Should the ticket include a ride on a canal boat? I checked the weather. I calculated various walking distances. I considered the offer of a 72-hour ticket inclusive of canal tour for the price of a 48-hour ticket. I noted that stop 6 is immediately outside our preferred bakery, about three-minutes’ walk from the apartment. I bought the tickets. 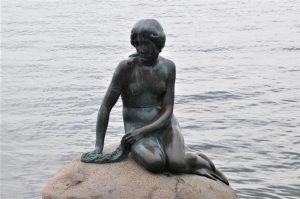 Our best bet for optimal weather seemed to be Thursday through Saturday so on Thursday we hopped on, exiting at the Anglican Church and Gefion Fountain, stop 10. We ambled through the Kastellet Park, took a look at Den Lille Havfrue on her rock and hopped back on the bus there at stop 12. The day, which had turned fine, clouded up and chilled down.  Our hop-off was ill considered but we ended up at Magasin, a grand department store with a monumental food court in the basement. We bought smørrebrød for lunch, gave into aching feet, and rode the Metro back to Christianshavn. 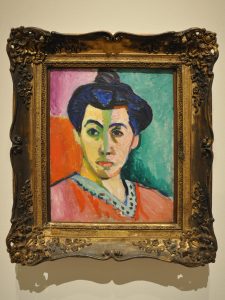 Matisse in the National Museum of Art

Next day we were back on the bus headed for the National Museum of Art, stop 20. Should have gotten off at Amalienborg Palace, stop 9, gotten pictures, visited the Marble Church and walked to the museum (1.3 km or just eight-tenths of a mile) but we didn’t. Following a marvelous time in the collections, we returned to the bus and determined that the fun part of the tour concludes by stop 21. The rest is all hanging out by hotels. In fact, eight of the twenty-three stops are either hotels or cruise ships. But no mind. 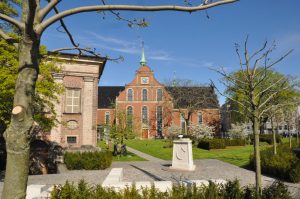 And we still had a days’ worth of hopping on and off the Red Bus to go and a tour of the canals to take. Saturday morning was sunny and pleasant. We knew the first boat headed out at 10:25 from the mooring by Holmens Kirke, stop 7, 700 meters from home, less than half a mile. We walked.

We walked to Restaurant Heering for a lunch of herring and beer and discovered that a sunny Saturday means the tourist magnet of Nyhavn is a madhouse. From there we walked to the Royal Gardens and into Rosenborg Palace, on to the Botanical Gardens and then to the Nørreport metro stop. 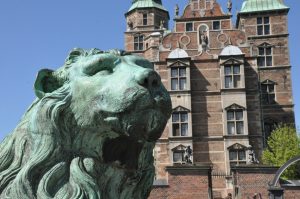 a lion of Rosenborg palace

We let the remaining Red Bus hours lapse. We had happily gotten our money’s worth.