First y’gotta get the ticket machines to work. I couldn’t get the darned thing to take our money!

Actually, once you get you started it’s not hard, but getting the thing to speak English and understanding that you need to “OK” ever step is not immediately obvious. It took several tries and a couple of helpful passers-by before we figured it out. Then y’gotta have monnaie, euro coins of the larger denominations. Short of coins, I wooed the cashier at the Musée des Beaux-Arts café today, sweet-talked him in front of a group of patiently waiting female diners until this Belgian of African heritage actually blushed, and he relinquished change for a 5 euro bill. Bless him.

Apart from the few quirks, though, it’s a nice system: clean, quick, fairly inexpensive and full of art. And the trams are awesome. I’m in love with #92 which runs from Botanique in the Saint-Josse district, our locale, down the Rue Royale/Koningsstraat to some point in the distant south , and will get us to the doorstep of the Horta Museum, but stops directly in front of the MdesB-A.

The first time we got on the Metro, I didn’t even notice the squad of K-9 police and their Malinois dogs until they poured out of the subway car. And did I pull myself together to get a picture? Of course not. But the scent of slightly dirty working dog lingered in the air long after the officers and their partners had gone. While the Metro is admirable on the whole, it has its problems. At Arts-Loi (having come in on the 2 or 6) we needed to transfer to the west-bound 1 or 5. We found the east-bound. That was it.

The station is in total disarray and even a kindly gentleman with a marked resemblance to St. Nicholas couldn’t figure out where to go for the west-bound train. “Mal indiqués” was how he described the situation. “Poorly marked” indeed. Our shared efforts plus information from helpful strangers put us in order. But honestly, what is wrong with a little signage however temporary?

We are still confused about how long tickets are good for and how far we can get on them. I think we will stick to the ten-trip tickets. I use it to get through the barrier, my Dear One pulls it from the machine and then reinserts it for himself. The trips are stamped on the back; when you get to ten (whether on the Metro, bus or tram) the ticket is done for.

But we have another week to go. 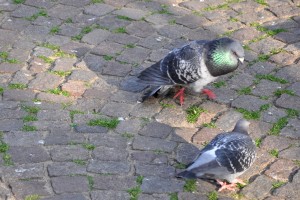 Then there are the trains. Bus 61 which stops a block and a half away at the Place Pierre Bossuet should have taken us to the Gare du Nord—and our host Eugénie said all the trains stopped at all the stations and that was the nearest. No problem, think we. We sit on a bench, enjoy the pigeons, especially the big lads strutting for the girls, and noticed a few people reading a hand-written notice on the bus sign and walking away. We couldn’t really figure out what it said but it seemed to suggest that the bus wasn’t coming.

So my Dear One and I trailed a nice woman, perhaps Turkish, with her stroller and a couple of rambunctious kids, figuring she would head for the nearest logical stop. “Come,” she said, “It isn’t far,” or words to that effect. (Neither of us have French as a first language.)

We walked down streets, around corners and down a steep hill, until we could see the elevated tracks of the train station. She pointed, we thanked her and gave each of the kids a euro coin to demonstrate our appreciation. Yes, it was walkable distance. No, there was no way on earth we were going to climb those steep slopes when we arrived back from a day in Bruges.

Failing to make the ticket machine work, we went in search of a human ticket seller. Two senior tickets, roundtrip, amounted to €12. Having explored the schedule the previous evening, we knew to avoid the 9:28 which is something of a milk run and takes two hours to make a one hour trip. Up on platform 9 we determined that the 9:40 was the train we wanted.

Should have gotten those first-class tickets we contemplated. Plenty of seating there. Second class was a cattle car. Maybe a few will get off at the next station or two, I thought hopefully. Huh-uh. I managed to get my Dear One into a seat and stood—in an aisle jammed with travelers and small dogs—until we got to Ghent. Then I perched myself on the arm of his seat. I was very glad to get to Bruges.

Fortunately the train home was all but empty. And we detrained at Gare Central, having decided we’d hop the Metro back to Madou. Then the weirdest thing happened. We walked out of the Gare, into the Metro, onto a platform and entered the train without encountering a single ticket barrier. It was a free trip home. We have to remember that.

I have finally developed a level of comfort with the STIB website, too. I can’t quite plan a trip yet, but I can use the map to figure out exactly where buses and trams go. (The Metro is no problem and besides, the stations are all marked on all the city maps.) 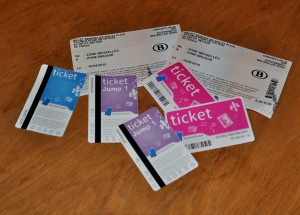 a pile of tickets

Pretty good public transportation system, once you get used to it.